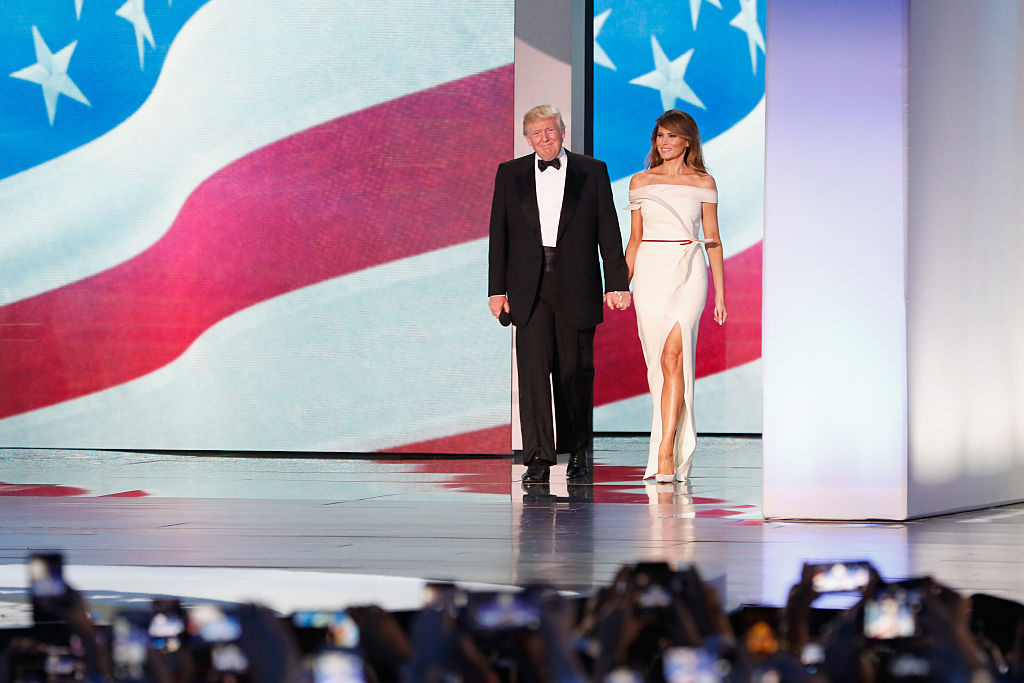 For her first appearance as the new incoming First Lady on inauguration day, Melania Trump wore the most quintessential of American designers, Ralph Lauren.

Wearing a form-fitting powder blue cashmere dress with a matching bolero jacket and pale blue suede gloves, the former model stood by her husband, Donald Trump, as he was sworn in as the 45th President of the United States on January 20. There was much speculation leading up to this day about who she would wear since there was a maelstrom of furor amongst some American designers publicly declaring they have no interest in dressing her—a stance in protest against some of her husband’s racist, sexist and controversial policies.

But perhaps, Ralph Lauren is the most appropriate choice for Mrs. Trump and these unusual and unique political times. Just as how Trump rewrote the playbook on running for presidential office, so too, in a way, Ralph Lauren was a game-changer in fashion marketing and how to cultivate a successful brand image.

Donald Trump, with no political experience, came out of left field and won the American presidency—a thought most people would have laughed at a few years ago. Ralph Lauren was the son of Jewish immigrants and grew up in the Bronx in the 1940s and 50s with the name Ralph Lifshitz. Before he changed his name and began a career designing a line of neckties, it might have been difficult to imagine he would become the most quintessential of American designers, building an empire on an esthetic that celebrates a waspy lifestyle of blue bloods, the English aristocracy and the upper-crust of old world Americana.

But it’s doubtful that the designer was putting any stamp of approval or making any political statements by dressing Melania Trump.  She marks the fifth First Lady, he has dressed. Past First Ladies included Michelle Obama, Nancy Reagan and Betty Ford. It should also be noted that Hillary Clinton also wore Ralph Lauren—a cream coloured pantsuit—for today’s inauguration in Washington. In her campaign for Presidency last year, Clinton also wore three different pantsuits by Ralph Lauren for her debates with her opponent Donald Trump.

Mrs. Trump has previously said she is inspired by Jackie Kennedy when it comes to First Lady dressing. Jackie O, one of the most stylish First Ladies, was extremely media savvy when it came to her wardrobe choices. She knew pale colours made for high contrast in black and white photography, and pastels helped her to stand out in a crowd. Whether this was a notion knowingly adopted by Melania Trump today is unknown, however, during the inaugural parade, she was a beacon of light among the dark and sombre colours of Washington in January. For her second official appearance—attending three of the inaugural balls later that evening—she opted for a creamy white off-the-shoulder gown, with a slit up one leg and an architectural ruffle running across the bodice. A very narrow red belt completed the outfit. Designed by Herve Pierre, a French designer who has been living in the US for the past 20 years, his most recent gig was at Carolina Herrera, where he worked for 14 years before leaving early last year.

Pierre issued a statement saying it was an honour to dress the First Lady and he collaborated with her on the original design. The gown worn to the inaugural balls traditionally have very historic significance. First Ladies usually put very much thought into this particular outfit because it often signals who she is and what her fashion sense would be during her White House years. After the event, the gown is donated to the Smithsonian which has a permanent exhibition of First Ladies’ gowns worn to the inaugural balls.