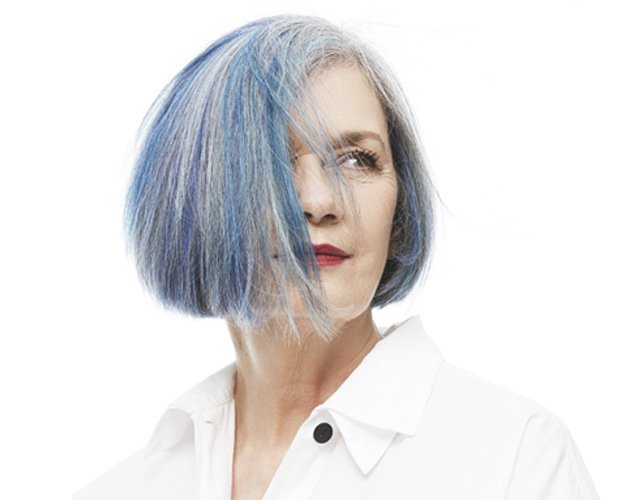 Blue was just another colour to me until I went azure about 20 years ago. Since then it has become a signature, a trigger for conspiratorial high-fives from pierced and rainbow-­hued young males and a butt for jokes. In the depths of a Stanley Cup hockey series a few years ago, a colleague of mine groused to the rest of the guys gathered around the coffee machine: “Doesn’t she realize she can stop now? The Leafs have lost already.” Even I thought that was pretty funny.

My blue hair has taught me that a tiny bit of outrageousness makes an old crone seem less threatening and more human. The other day, an ancient homeless person glanced up from the pavement he had been contemplating, shook his grizzled face and exclaimed: “Hey, love your colour. You look like a blue jay flying past.”

Women stop me on buses and in washrooms to ask how I do it, as though my hair is like a blueberry meringue pie that they could make for themselves if only they had the coveted recipe. Now even young women like singer Katy Perry, actresses Jaime King and Kate Bosworth are sporting blue, demonstrating fashion’s ineluctable ability to reinvent old styles to make them fresh again. But I have a secret advantage over those young women. I don’t need to bleach because my hair is now more grey than black.

Going blue was an innocent diversion, until I happened to be on a book panel with an aging male who dismissed the late Carol Shields, author of the Pulitzer-Prize winning novel, The Stone Diaries, as “appealing to a certain segment of the reading public … women who belong to the blue-rinse set.”

Like the warrior queen Boudica, my outrage boiled, and I was in danger of turning the air as blue as my hair. That’s when I realized that dying my hair blue was more than a middle-aged whim. It was a feminist manifesto, fuelled by a mixture of radicalism and indolence.

As a child, I trailed along to my mother’s hairdresser and watched as increasing amounts of navy blue powder were measured into a jug and poured over her salt-and-pepper locks. This was called a blue rinse, and it left an inky aura that sometimes rubbed off on the pillow or her collar.

The style dates back to the pharaohs, who used Lapus Lazuli in funereal art and imagery, and has caused regular fashion waves over the centuries. As a teenager, the 18th-century British politician Charles Fox, who would later become a rival to William Pitt the Younger, was said to favour gambling, women and “continental” fashions including tinting his hair blue.

The expression “platinum blond” was allegedly coined in the 1930s for Hollywood bombshell Jean Harlow in the film Hell’s Angels. Every week, Harlow’s hairdressers doused her hair and scalp with a toxic mixture of undiluted bleach and ammonia. Then they rinsed it with methylene blue to tone down the scorched yellow look from all of that bleach.

The fashion caught on during the Depression for older women who wanted to cover their grey hair without spending a lot of money and became even more popular after the Second World War when Elizabeth, the Queen Mother, began rinsing her grey locks with blue powder. So many followed her example, that most women over 40 were drafted into the blue-rinse brigade.

Smudgy dark blue hair was one of the mysteries of being a grown-up until the day my mother came home with a sheepish look on her face and alarmingly black hair. “The hairdresser miscalculated when he was measuring the powder,” she said disingenuously, as we stared at her from our places around the dinner table. “Then he had to colour my hair to even it out,” she added lamely.

“You will have to keep doing it now,” my father replied sternly, as he helped himself to more mashed potatoes. Now I realize that she wanted more out of life than boring respectability. For a little bit of abandonment, she was willing to enslave herself to a regime of touch-ups and colour sticks to mask her roots between appointments. And so she did, until her once softly glimmering halo turned into a flat, colour- saturated helmet that repelled sunlight like microwaves hitting a metal dish.

From the depths of my teenage hauteur, I sneered at the hair products mushrooming on the bathroom shelf and ridiculed the way her friends were turning into brassy blonds and persimmon redheads. I vowed that I would never dye my own silky chestnut tresses. Over the years, I permed my hair, cut bangs, let it grow halfway down my back, then chopped it off military style. I even sported the dreaded mullet but I never succumbed to the tyranny of the bottle, even though silver strands started insinuating themselves when I was still in my 20s.The good thing about having dark hair, I used to joke, was that you could be both a brunette and a blond in the same lifetime.

But then, like my mother before me, I, too, wanted more, and doing something reckless with my hair seemed a pretty safe option. Besides, I was sick of women with blond-on-blond highlights or orange pompadours saying to me: “I love your hair. If I didn’t colour mine, it might be almost as grey as yours.” In which lifetime, I would think to myself behind a stiff smile.

Back in the late 1990s, dying your hair to match the rainbow was something only teenagers did to drive their teachers or their parents crazy. Grown-up women with children and jobs didn’t indulge in such hirsute shenanigans. That’s one reason the azure plunge appealed to me.

Because it is an extreme version of the blue rinse of my mother’s era, I considered it ironic and self-referential – a postmodern colour, if you will. Besides, unlike the yucky colours that chartreuse and cerise turn as they fade, I figured blue would make my grey hair whiter as the colour wore off between applications.

My family was not so easily won over. My husband opted for a blunter expression of the same dismay voiced by my father all those years ago: “How much did that cost?” he demanded, followed by: “How long will it last?”

My kids were brutal. A horrified gasp followed by shrieks from my daughter, silent head shaking and an abrupt retreat from the refrigerator to his bedroom by my son, underscored by a blast of heavy metal, gave a pretty clear indication of their reactions.

For a parent, breathing is usually enough to embarrass most teenage offspring. Either it grinds you down or it gives you a pulse of vestigial power. When my daughter took to calling me Marge from The Simpsons and my son invariably reminded me not to forget my hat as I left the house, I knew that I had penetrated their teenage disdain. Even better, their friends loved my hair and told me so. They would have hated it on their own mothers, of course, but on somebody else’s mom, it was pretty cool.

I like to think that I have mellowed with time – and so has my hair. In the old days, I flashed a defiant streak of blue to the consternation of my teen-aged children and the bemusement of colleagues and friends. Nowadays, I have a more sophisticated look – if such a thing can be said about blue hair – delicate navy lowlights, which I spike up by clipping cerulean extensions into my hair to suit my mood or the occasion.

The constant, alas, is that the blue fades every time I even think about having a shower. Too much maintenance, I finally decided. Then a friendly colourist shared her dirty little secret: she goes two weeks between hair washings and uses dry shampoo in between. I’m too fearful of being pilloried as a public health hazard to go that long but I admit that dry shampoo is my new best hair friend. I like to think of it as my version of the old Clairol ad: “Does she or doesn’t she? Only her hairdresser knows for sure.”