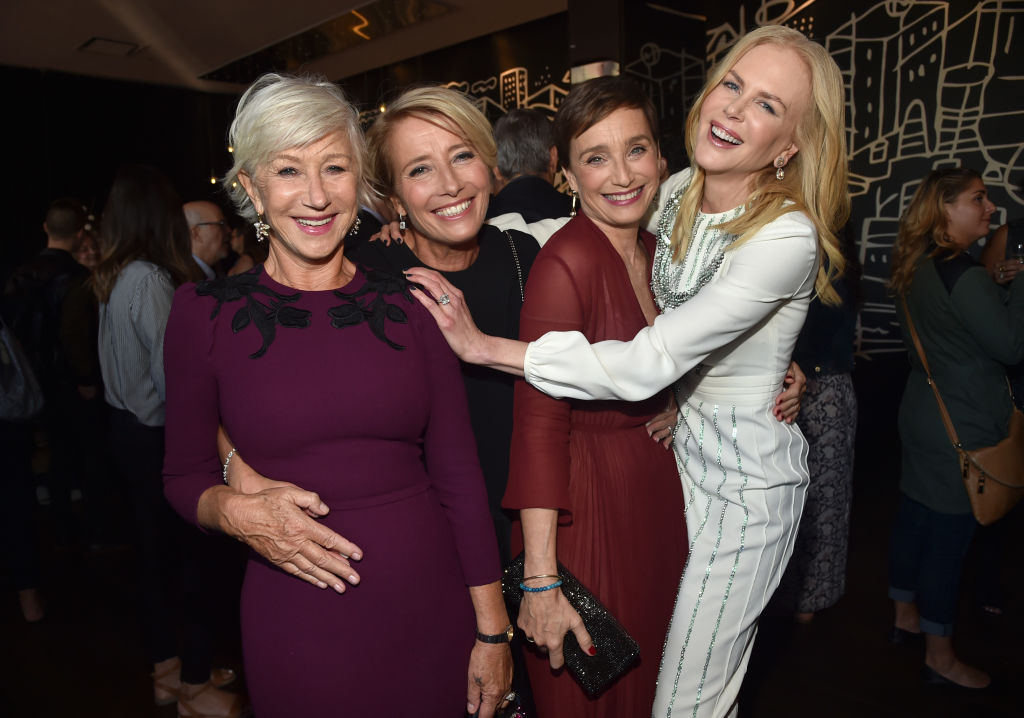 Lights! Camera! Fashion! An army of celebrities touched down in the city this past week for the annual Toronto International Film Festival. Here, some of the most stylish Zoomer-aged actresses at TIFF and tips on how to get their red carpet looks.

With red carpet premieres, after-parties and a multitude of interviews with international press on the agenda, actresses have to bring their fashion A-game to town. Among some of Hollywood’s hottest starlets in attendance – Jennifer Lawrence, Margot Robbie, Emma Stone and Jessica Chastain – there were some legends who held their own in the style department.

Acclaimed actresses like Helen Mirren, Emma Thompson, Kristin Scott Thomas and Nicole Kidman (pictured above at the Entertainment Weekly’s Must List Party at the Thompson Hotel ) showed they can have fun like the youngsters and also look magnificent.

Scroll through our slide show below for some of the stylish Zoomer-aged actresses at TIFF and tips on their red carpet looks. At the premiere of Mark Felt – The Man Who Brought Down The White House, at Ryerson Theatre, the actress wore an electrifying blue dress. A dress with such strong architectural details – an asymmetrical caped sleeve and embellished waist – calls for simple accessories, which in Lane’s case meant strappy shoes, a black clutch and single metal cuff. The bohemian trend is one typically favoured by millennials at music festivals. But at the Hollywood Foreign Press Association and InStyle party at the Windsor Arms Hotel, the super stylish actress showed how to put a grown-up spin on the boho trend.  She went full-throttle glamour with a full length Valentino gown paired with velvet heels and simple box clutch. At the HFPA and InStyle party at the Windsor Arms, the actress showed how to do a modern take on tuxedo dressing. Instead of traditional black and white, she went with cool black satin pants but with blush-coloured jacket and a pussy-bowed chiffon blouse. Wearing a tangerine Julea Domani dress to the premiere of I, Tonya, the actress showed off her svelte figure. With a dress of such bold colour and streamlined shape, she kept the accessories demure and minimal. The legendary entertainer showed up at TIFF for the premiere of the documentary chronicling her life, Grace Jones: Bloodlight And Bami. She is one of the few celebrities who has cultivated a signature look and has stuck with it throughout her career. Playing up her iconic look for the premiere held at The Elgin, Jones showed you can never be too old to sport over-the-top drama. A figure hugging gown, long gloves and a shawl worn over your head as a hood – all in black – and a fair amount of chutzpa, are all the ingredients you need to create a traffic-stopping outfit. The multi-award winning actress has never been afraid of fashion, and for the premiere of The Leisure Seeker, she opts for a form-fitting grape coloured dress by Dolce & Gabbana. Accessorizing with a lace fan – which works nicely with the romantic embroidery on her dress – the actress shows you can also have fun with fashion even on a red carpet. The British actress attended the RBC hosted “The Children Act” cocktail party during TIFF and was a vision of low key chic in a black cocktail dress. But what gave that sheath dress some quiet glamour was the rainfall of silk fringe and her perfect geometric white purse. Attending the Darkest Hour premiere at Roy Thomson Hall, the radiant English actress proved you can wear a circle skirt at any age. Striking a perfect style note, the actress made the look modern with a wide belt, open-toed heels and by perfectly matching the hue of her skirt with her lipstick. The singer and actress attended the premiere of her movie, Mudbound, at Roy Thomson Hall in a black and white look that shows there is more than one way to do le smoking. A smart cocktail dress can also capture the tuxedo vibe like this one with white cuffs. While infinitely sexier than a tux, the entertainer keeps it on the elegant side with simple diamond rings and a pair of heels festooned with bows and stars.