Flaherty: “We will not spend recklessly” 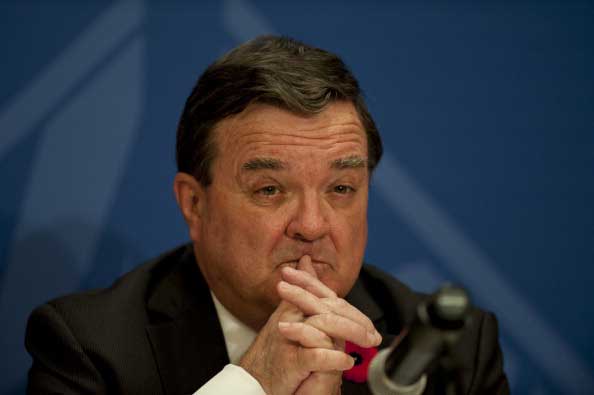 Jim Flaherty has just released his eighth and – with a cabinet shuffle expected this summer – likely final budget.

Flaherty said it was the right budget for the right time. “In uncertain global economic times, the most important contribution a government can make to bolster confidence and growth is to maintain a sound fiscal position.”

The focuses of the finance minister’s 400-plus page document were to knock down Canada’s $25 billion federal deficit, curtail spending and create new jobs.

The quick analysis shows there’s very little in the way of new spending – less than $1 billion – according to the CBC. The Conservatives estimate that spending controls will shrink the deficit down to $18 billion by 2014.

The highlight of the budget is The Canada Jobs Grant, which promises to train and match people to real jobs. Each trainee will get $5,000 from the government, plus matching $5,000 grants from provinces and employers. There will also be a continuation of tax breaks for small businesses, including hiring incentives for companies and extended breaks for the manufacturing sector.

The other big announcement was the Building Canada Fund – $47 billion in infrastructure spending that will allow cities to repair crumbling sewer systems, roads and sidewalks. This money is  expected to create new jobs. (For more a detailed budget breakdown, click here.)

For older Canadians, CARP’s Vice President of Advocacy Susan Eng said that while the budget did have some modest measures for older Canadians, it “contained little to address their priority concerns: retirement security, seniors’ poverty and equitable access to healthcare, affordable drugs and home care.”

Eng identified the measures that should help Canadians, including: