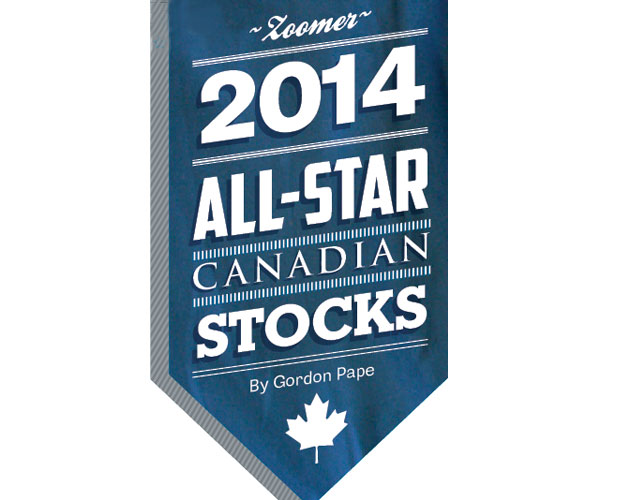 Some investors are like elephants – they never forget. That explains why many people still refuse to invest in the stock market even though it has been more than five years since we hit bottom in the crash of 2008-09.
Never mind that the markets have rallied back since. The fear that another collapse could happen at any time continues to haunt people. They prefer to have their money in dependable risk-free guaranteed investment certificates, even though the interest rates offered by the banks are pitifully low.

I understand the caution. The 2008-09 crash almost brought down the international financial system and resulted in the worst economic downturn since the Great Depression. But things have changed. The North American economy is gradually improving, and the outlook for the next few years is positive.

So it’s time to shed those stock market inhibitions and start to earn some higher returns. I’ve put together a package of three Canadian All-Star stocks that I think should be part of all portfolios. These are sound blue-chip companies with strong business franchises, good management, and a solid dividend history. That does not mean the share price will always go up – no one can promise that. But when the inevitable market corrections come along, these stocks will hold up better than most and rebound more quickly. Meantime, you’ll be collecting dividends every quarter.

So here they are: my Canadian Stock All-Stars.

A generation ago, the railroads were considered to be a relic of the past. Sure, those ribbons of steel had transported thousands of immigrants from Halifax to Montreal, opened up the Prairies and linked Canada from sea to sea by negotiating the Rockies. But all that was history. Passenger trains had been overtaken by jet planes, and freight could be moved more efficiently by transport trucks. Who needed railroads any more?
It turns out we all do. Not only did the trains survive, but the companies that run them have prospered. As the highways become increasingly clogged and the price of fuel soars, railroads have once again emerged as the most cost-
effective way of moving goods from point A to point B. And while long-haul passenger service has become more a luxury than a necessity, the commuter business is thriving, albeit with government support.
One of most successful companies in this business is Montreal-based CN Rail, the old Canadian National in modern dress. For most of its history, CN was a Crown corporation. In November of 1995, the company was privatized, and that opened up a new era of expansion and prosperity. Since then, CN has made several key acquisitions and streamlined its operations to the point where it is now the most efficient major railway on the continent.
Many people still think of the CNR as a pure Canadian railroad, but it is much more than that. The company actually bills itself as North America’s railroad, with justification. Its tracks extend through the heartland of the United States, down the Mississippi River corridor to the Gulf ports of Mobile, Gulfport and New Orleans. All told, CN has approximately 20,600 route-miles of track on the continent and employs more than 22,000 people.
This is another company that has rewarded patient investors. The stock has gained more than 375 per cent since 2002, and the dividend has been raised 11 times in the past decade, most recently by 16 per cent.

Calgary-based Enbridge is a multi-faceted operation. It is best known for its huge pipeline business, which operates the world’s longest crude oil and liquids transportation system. Enbridge has almost 25,000 kilometres (more than 15,000 miles) of crude oil pipelines, delivering more than 2.2 million barrels of oil a day. It also has an extensive system of natural gas pipelines in Western Canada and Texas and is the largest gas gatherer and transporter in the Gulf of Mexico, transporting approximately 2.3 billion cubic feet a day.
The company is also Canada’s largest retail natural gas distributor, serving Ontario, Quebec, New Brunswick and New York State, with more than two million customers. Enbridge has about 11,000 employees in Canada and the U.S. and has been recognized as one of the Global 100 Most Sustainable Corporations in the world.
The company has a fine long-term record of delivering value to shareholders. Since it was first recommended in my Internet Wealth Builder newsletter in August 1999, the stock has increased in value by more than 550 per cent. The dividend has been raised every year for more than a decade, even during the bitter recession of 2008-09. One more key point: the risk is very low. The shares did drop during the crash but by much less than the broad market, and they recovered quickly. If you only own one stock, this is it.

BCE is Canada’s largest telecommunications company and the owner of Bell Canada, Bell Aliant and Bell Media. Bell Media in turn owns the CTV television network, 35 specialty channels, pay TV services like The Movie Channel and HBO Canada, and radio stations in 55 markets.
Ever since the bid to privatize BCE failed in December 2008, management has been aggressively working to rebuild investor confidence. As part of that process, the dividend has been increased 11 times in less than six years, the latest at the start of 2014. In total, those hikes add up to a 69 per cent increase in the payout, which has contributed to driving up the share price.
This is an ideal stock for income investors.
At the time of writing, the yield on the shares was 5.1 per cent, and the payments are eligible for the dividend tax credit if held outside a registered plan, which means they are taxed at a lower rate.
This is a large stable company that offers an excellent dividend and has long-term growth potential.

I personally own shares in each of these companies. Over the long term, you’ll make a lot more money from these stocks than any GIC will pay.