A Night at Nordstrom’s 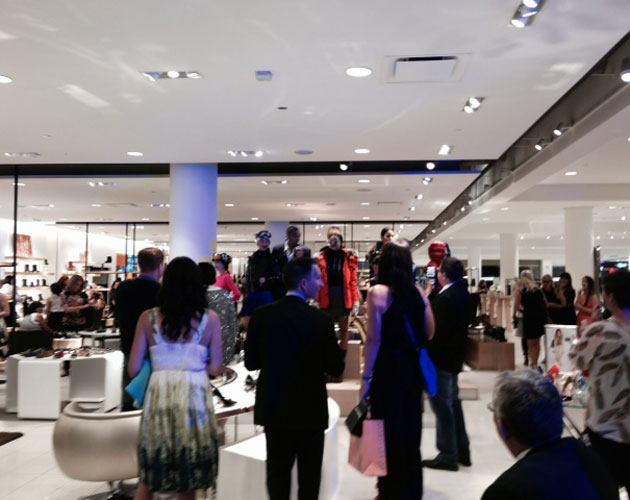 A peak inside Nordstrom's opening night party in Calgary.

Department store retailer Nordstrom Inc. has arrived in Calgary with a shop tailored specifically for Canada. “This is definitely a step forward in terms of design for us,” explains Jamie Nordstrom, president of Stores. “We’ve allowed for more natural light and wood finishes, which bring warmth to the store, and we’ve also created an open floor plan that enables us to be more flexible in how we merchandise.” Unlike Target’s rollout, Nordstrom wants to cater specifically to the Calgary consumer. The first to debut north of the border, with six more stores slated to open over the next three years, the 140,000 square foot Calgary store replaced the former Sears in Chinook Centre. According to Nordstrom, Calgary was the first pick due to the availability of real estate, timing of construction schedules, its urban feel and the city’s desire for fashion. “We were surprised by the modern metropolitan feel of the city,” cites Nordstrom “In the last five years, we have turned our attention to the Canadian market. A lot of people in the U.S. aren’t as aware of what’s going on up here, so we are really excited about this launch. Canada is a real opportunity for us.” Leading U.S. off-price retailer, Marshall’s opened its first store in Calgary this August as well. It, too, felt that Canadian consumers were ready for the U.S. shopping experience. “Not only was it the right time to open as we had the resources to do so,” says shopping expert for Marshall’s Teresa Quick, “but given that Calgarians are quality- and value-conscious, the Marshall’s model works here. The more shopping options, the better.”

To celebrate its arrival in Canada, Nordstrom unveiled its space in true fashion by hosting an in-store gala Sept. 17. All of the proceeds from the sold-out event went to the Alberta Children’s Hospital Foundation and United Way of Calgary and Area. “We were so thrilled to partner with Nordstrom’s,” says Meghan Kociuba, manager community initiatives and events for the Alberta Children’s Hospital. “They are making such an impact in our city.” The most anticipated retail event of the year, the bash didn’t disappoint. Not only were guests allowed a sneak peak before the official opening but were also treated to a bevy of cocktails, hors d’oeuvres, dinner and dessert courtesy of award-winning chef Duncan Ly of Hotel Arts. Although the party was bustling from the get-go, it went into overdrive when Toronto recording artist Sean Jones hit the stage. Patrons were busy snapping up merchandise and kicking up their heels long past the scheduled closing time of 8:30. Brands they couldn’t get enough of included Rag and Bone, Kate Spade, Burberry Brit, Canali, Ted Baker and Michael Kors. Since Nordstrom’s got its start as a shoe retailer, it made sense that the shoe department was stocked with a multitude of labels including Jimmy Choo, Valentino, Fly London, Chloe, SJP by Sarah Jessica Parker and cowboy boots by Frye and Old Gringo. Canadians are definitely ready for U.S. retailers as evidenced by Calgarians’ enthusiastic response to Nordstrom’s opening. Upon leaving the glam gala. I overheard one happy shopper exclaim to her friend: “Wow, that was a blast! I’ll definitely be back. I hope Nordstrom’s is like this every day!”