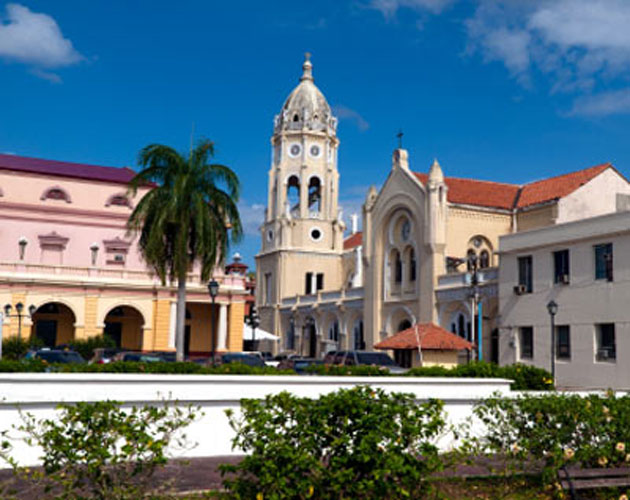 Ever heard of “geographic arbitrage”? Here’s how it can work for your retirement: you earn a pension or retirement income in a country like Canada that has a high cost of living and then put those hard-earned dollars to good use in a country with a much lower cost of living. The result? Retiring abroad means you can you enjoy a better quality of life for less cash — plus you get to enjoy a new culture and a new way of life.

Not sure where to look? There are many lists of top destinations out there — we’ve rounded up some of favourites.

You’ll love it for its sunny climate and the scenery, but financial experts love it for its lower cost of living and fair tax policies for foreigners — something you won’t find everywhere. Panama also has easier entry requirements than many countries in the region, plus a well-developed infrastructure of roads and communications. The local currency is based on the U.S. dollar, and health care services are good in its main cities. It’s not as cheap as other retirement havens, but you get to live in paradise for $1500 to $2000 a month.

But the benefits don’t stop there: as a retiree, you’ll find generous discounts of between 15 per cent and 50 per cent on things such as hotels, restaurants, movies and many professional services. If your home in Panama is your only residence, you won’t pay property taxes either. (For more information, see PanamaInfo.com.)

Rural areas may be lacking in health care and other essential infrastructure, but experts note the major cities are affordable and offer many amenities — such as hospitals equivalent to what you’ll find in Canada. Expat-friendly Cuenca often gets the nod over pricier Quito, plus you don’t have to worry about adjusting to the altitude.

Some sources say you can live well for as little as $800/month in Ecuador, and you’d be hard pressed to spend $1500 even with luxuries thrown in. Like Panama, there are already established expat communities and generous discounts to be had. If your Spanish is rusty at first, don’t worry — English is spoken throughout parts of the country.

What other Central and South American destinations made the list? Belize often gets the nod because its official language is English. Lush, green Costa Rica is another popular choice as is Granada, Nicaragua. Mexico also appears on many lists, but you’ll want to choose your location very carefully to avoid crime. Head further south and you can find a reasonable cost of living in Uruguay or Argentina.

Mais oui! But we’re not talking about living the high life in Paris or kicking back in Provence. Step outside the major cities and you’ll find an affordable cost of living, say experts. For example, AARP recommends the Languedoc-Roussillon region in the Southwest — think medieval towns and castles, vineyards, rocky hills and the Mediterranean seashore. It’s where you’ll find Nimes (with its Roman ruins) and stylish Perpignan. With access to the high-speed train service in Montpellier, you can take a jaunt to Paris for the weekend.

The cost of living is higher than other retirement destinations — AARP estimates a yearly budget of $30,000 USD — but France does have the best health care system in the world, according to the World Health Organization.

Does your idea of an affordable retirement include noshing on world-renowned cuisine and touring local wineries? As with France, you’ll want to steer clear of major cities and hotspots like Umbria and Tuscany– but AARP notes a “comfortable life” can be had in the Le Marche region for just $20,000 – $25,000 USD.

Naturally, the cultural and artistic offerings are more modest than you would find in Florence or Rome, but the area has its fair share of art and architecture — including the walled city of Urbino.

Got your heart set on Europe? Some other top spots getting the nod from experts include Cascais, Portugal and Costa del Sol, Spain. Don’t be afraid to venture farther east. Expats are discovering destinations such as Tallinn, Estonia and Croatia as well.

It’s a long way from home, but a chance to embrace a different culture and language — not to mention some top-notch eateries. According to some estimates, a monthly budget of $1000 to $1200 will easily cover good housing, meals out, health care, entertainment and a variety of other services. Some parts of the country still experience unrest, but experts say much of the country is peaceful as well as beautiful.

If the hustle and bustle of Bangkok — and the higher prices — isn’t your taste, experts suggest Chiang Man as a budget-friendly alternative. Hua Hin is more of a traditional retirement haven with golf courses and outlet malls and might be a good place to start if you’re worried about culture shock.

Concerned about foreign residency requirements? Experts say they won’t be a problem in Malaysia thanks to initiatives aimed at bringing in expats. Here, income from foreign sources is also tax-free, and buying property is permitted. It’s the easiest place in Asian to achieve permanent residency, but you’ll want to take a closer look at local laws. Conservative dress and discrete behaviour are expected, and homosexual activity is illegal, according to the Canadian government website.

Experts say destinations like Kuala Lumpur are “moderately priced” (i.e. not as cheap as other retirement havens) but it is fairly easy to settle in. Infrastructure and services are in place to cater to retirees, and some sources note that many locals are eager to practice their English with newcomers.

RELATED POST: Asia Communique: When You Know You Are Not In Kansas Anymore

What other Asian destinations should you consider? Experts also like nearby Bali, Indonesia as well as the Philippines.

What to know if you’re considering it

No doubt a lot of your attention will be on cost of living, but there is a lot more to consider. For example:

– Local laws and customs. Are you comfortable living within the laws and expectations of your new home?

– Visa and residency requirements. How easy is it to obtain a visa or permanent residency? The rules and procedures are different for each country.

– Rules regarding property ownership. In some places, you can own a condo but not land while other countries don’t have restrictions on purchases.

– The community. Do you want to live among your fellow expats or live like a local? Expat areas are more expensive, but you’ll be living among people who speak your language and share your culture.

– Pension. Can you receive your government benefits in the local currency? Is there an option to join the country’s social security program?

– Taxes. What taxes will you have to pay, and to whom? You could end up paying in two different countries — and face high duties, tariffs, withholding taxes and consumption taxes in some areas. You’ll also want to know about estates taxes, just in case.

– Fluctuating currency exchange rates. Exchange rates are going to fluctuate. Can your budget handle an increase?

– Access to financial services. Opening a new bank account and investing may not be as easy as you think, and there could be heavy fees involved.

– Health care. What is the quality of care offered and how do you pay for it? In many places, you’ll have to pay upfront for services, even if they are a fraction of the cost. Also, experts warn health insurance can be expensive if you’re over a certain age.

– Travel and communications. How much will it cost to keep in touch with the family and friends you’re leaving behind? Have you budgeted for travel to visit loved ones?

Also, remember that living in a country is very different than vacationing. Many experts recommend a “test drive” first — that is, an extended stay at your destination outside tourist areas, including some off-season time so you can get a feel for costs, amenities, climate, pace of living and culture.

There is a lot to know about retiring abroad and a great deal of research to be done if you’re interested. Some good places to start are the Government of Canada’s Retirement Abroad and AARP’s 13 essential questions you must ask before retiring abroad.

For a look at other top destinations, try AARP Magazine’s Best Places to Retire Abroad and this overview from CBS News.

12 tips to earn money in retirement

10 tips to keep your retirement on track

What do you want to be when you retire?

Can we beat ageism?