Insider Tips: The Best of Melbourne on a Budget 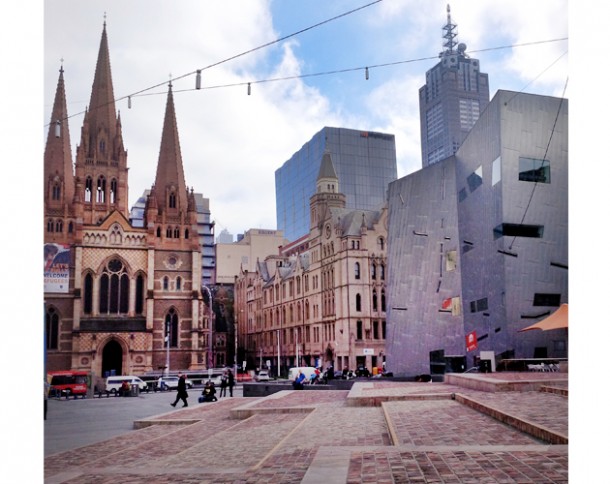 Bucket List for less? We’ve got a few insider tips on where to go now in Melbourne.

We love Melbourne. Its style, café cool meets this-century-modern makes it a very approachable yet deeply interesting city. And many of the city’s most attractive attractions, such as art, architecture and community, are free or cost very little (the price of a caffe latte, to be exact!)

And we’re not the only ones. It looks like the rest of Canada is catching on.

Our friends at Air Canada announced, in early May, a new route: Vancouver to Melbourne. “Air Canada is continuing its strategic, global expansion with a diverse range of exciting new non-stop routes this winter to Australia, South America, the Caribbean and the United States,” said Benjamin Smith, President, Passenger Airlines at Air Canada. “Vancouver-Melbourne is our third route to Australia, in addition to year-round service to Sydney and Brisbane. Our seasonal Melbourne service will provide additional options for business travellers between North America and Australia as well as Australians seeking a Canadian winter vacation experience.” The flight service will run four times weekly from December 1, 2017 to February 4, 2018, and is easily connected via an city Air Canada flies from, through Vancouver.

Click through for more reasons to travel to Melbourne now.

The Inspiration: The lion’s share of café culture in Melbourne today was spring-boarded from the Greek and Italian immigrants of the first half of the last century. Laneways between buildings, lined with little outdoor tables, chairs and umbrellas, like those on Degraves Place – it’s now a popular spot for breakfast – was a direct result of that immigration. Before that, Melbourne was a strict tea-drinking society.

Of course, the city hasn’t completely forgotten its Brit roots, with glass roofed arcades bridging the gaps between buildings, old and new. New York-style art deco, too, had its moment here, when the Majorca building at the end of Degraves was erected, in the 1920s. As you stand at one end of these narrow lanes and observe the mob of java lovers hanging out, it looks like the ultimate communal table, running the full length of the alley, using up all available space to take your morning cappuccino al fresco. La dolce vita, indeed.

Yet, despite its Euro roots, this city is also very much influenced by the street. The laneways have been used for decades by citizens to navigate the core and, along the way, food purveyors, coffee brewers, shopkeepers and artists made their mark. Graffiti is an art form here, encouraged and promoted by the city’s officials, with tours that introduce visitors to this unique and colourful expression – and a few foodie stops along the way. Fortunately, I’ve booked with a guide who knows his way around. Sean from Hidden Secrets specializes in a “Lanes and Arcades” tour. There are 30 laneways, he says, most of which have their own graffiti art curators. Even the trash bins are works of art. Artisans of another kind do well here, too. Take Koko Black and Haigh’s Chocolates, for example. Their fare is delicious and their locations ubiquitous – like Starbucks here, but cocoa beans rather than coffee beans – allowing for chocoholics to get a high quality fix.

The arcades, not unlike those you see in London, England, are also from the last century. In fact, the Block Arcade has something in common with its English cousin, the Burlington Arcade off Piccadilly. They are two of only three examples left of the Victorian Mannerist style of architecture, with the other in Milan. Built for the Melbourne Olympics in the 1950s, the arcades are similar to the underground PATH system tunnels in Toronto, but here, they are both above and below ground. Indie designers and magazine shops have little outposts here; there’s even a retired opera baritone singer who now cuts hair under the Flinders Street Station. Light boxes line the arcade tunnel walls, introducing commuters to up and coming artists, all under the age of 22.

And, although the coffee scene is referred to as Melbourne Café, these aren’t cafés in the traditional sense any more. “Café’s not the right word for what it is,” says Melbourne-based chef Chris Hamburger, who gives us the download on what’s trending in coffee now (click through for more of the chef’s Melbourne tips).

“It’s great chefs, doing great food at really reasonable prices. The environment is casual. The music is edgy. Those constraining things [from fine dining] don’t exist in a café, you can do whatever you want.” Kind of like graffiti, I think. www.visitmelbourne.com; www.hiddensecretstours.com —Vivian Vassos

Stay: For a luxe splurge, check into the Park Hyatt Melbourne, www.melbourne.park.hyatt.com.

Cold brewing, the so-called third wave of coffee, is booming in Melbourne where, at any one of 300-plus cafés, patrons enjoy high quality, freshly roasted, single origin coffee (unblended) with a focus on the bean’s flavour, rather than a flavour shot.

Hamburger, chef-turned-coffee-aficionado, visited Toronto to demonstrate cold brewing at the annual Terroir Symposium. The cold-drip coffee was served over ice, the lack of heating is said to preserve more of a coffee’s subtle flavours. It’s just one of the brew styles offered at Stagger Lee’s Café in Melbourne where Hamburger is head chef. He spent a few years cooking in Canada including two years at The Drake, but returned to Australia recently and joined Melbourne’s café scene. “There’d been a real groundswell of people doing really good things with a thing that’s been quite overlooked and mundane for many, many years, that’s coffee,” he says.

Hamburger works with agents to find beans for roasting and brewing, often engaging in direct trade; buying direct from growers around the world. Of course, Melbourne’s cafés are about more than coffee. “It’s one of those places that you come in three times a day, let alone three times a week,” he says. You can start your day there with pastries and coffee – according to Hamburger people travel across the city for their favourite barista – and also end your day there with a full, five-course meal. Hamburger gushed about the talent of the scene, especially at fellow cafés: The Kettle Black, Top Paddock and Code Black. www.staggerlees.com.au