Will Frosty Relations Between U.S. and Canada Doom NAFTA? 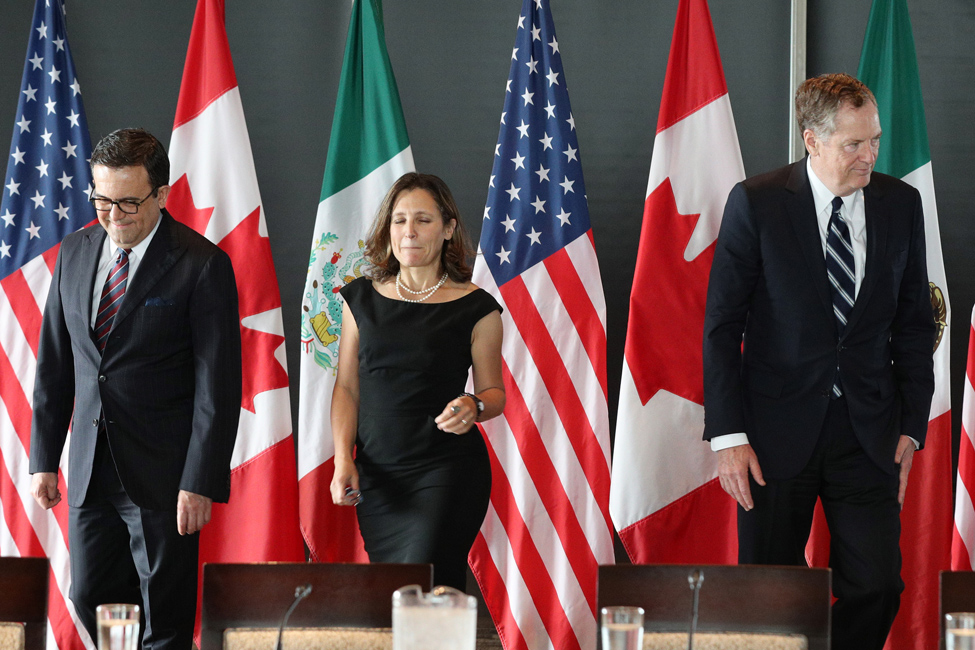 Foreign Affairs minister Chrystia Freeland has a tough task ahead of her as NAFTA talks get underway this week.

This week the Liberal government begins its final push to salvage the North American Free Trade Agreement (NAFTA), a deal that many feel has been hugely beneficial to Canada.

But as talks get underway in Montreal, Canada’s trade team is clearly not in a strong bargaining position against its cantankerous neighbours to the south. President Donald Trump has already made it clear on multiple occasions that if the NAFTA isn’t rebalanced in favour of the U.S., he’ll walk away from it.

I will renegotiate NAFTA. If I can’t make a great deal, we’re going to tear it up. We’re going to get this economy running again. #Debate

Implemented in 1994, the NAFTA deal removed tarrifs on the flow of goods and services between Canada, the U.S. and Mexico. The feeling south of the border is that Canada and Mexico are getting far more out of the deal than the U.S., leading to calls that the deal be completely renegotiated or ripped up.

That leaves Foreign Affairs minister Chrystia Freeland with a virtually impossible task. She must not only convince the U.S. delegation that NAFTA is beneficial to all three countries but also carve out a new deal that doesn’t concede all trade benefits to the U.S. While she’s been desperately working the U.S. political corridors to shore up support for NAFTA, she’s failed to gain support from Trump insiders.

Thank you @LindseyGrahamSC for the important discussion on the benefits of #NAFTA and how we can modernize this agreement as a win-win for both Canadians and Americans. #Washington pic.twitter.com/hpsTnBPlrZ

The main problem the administration has against NAFTA is the U.S. has big trade deficits with both partners: Mexico ($60 million per year) and Canada ($11 million per year). The president blames it for the loss of the countless manufacturing jobs that have shifted to Mexico over the life of the deal and feels China is taking advantage of the deal by selling its goods to the U.S. through Mexico.

So the U.S. wants to “rebalance” NAFTA or they’ll have no qualms in walking away from the bargaining table. And if the talks do fail in Montreal, the deal could be in its final death throes, leaving Canadians staring into a future of economic uncertainty.

Here’s what the key players on both sides of the border are saying about NAFTA leading up to this week’s negotiations:

“I’m not going to sign any deal at any cost. If it’s a bad deal, I’m going to walk away from it, because no deal is better than a bad deal for Canadians.” – Prime Minister Justin Trudeau

“When it comes to what the U.S. may or may not do, our approach is to hope for the best and prepare for the worst.” – Chrystia Freeland, Canadian Foreign Affairs Minister

“We have seen no indication that our partners are willing to make any changes that will result in a rebalancing.”  – Lead U.S. Trade Representative Robert E. Lighthizer

“I don’t think we should pull out of it. I think we should work within it. Having said that, the Canadians are really frustrating on this issue, I gotta tell you.” – Paul Ryan, Speaker of the U.S. House of Representatives

“I’ve come to the conclusion that he isn’t actually in favour of free trade. Everything Justin has called it Trudeau touches turns into a disaster.” – Conservative Opposition Leader Andrew Scheer

“We can’t just relax and assume it would be a small shock.” – Bank of Canada  Governor Stephen Poloz on the what the death of NAFTA could mean to our economy

“NAFTA is a 25-year-old agreement that – yes – could use some updating. But to walk away from it and to quit the agreement would be reckless and irrelsponsible by this administration. It would cause irreparable harm to this relationship that we have cherished and nourished together.” – Bruce Heyman, former American ambassador to Canada

“NAFTA is in the toilet. The only way it’s going to survive is if somebody completely capitulates. And that’s not going to happen in the short term.” – Jerry Dias, president of Unifor, Canada’s largest private sector union

Let us know what you think!