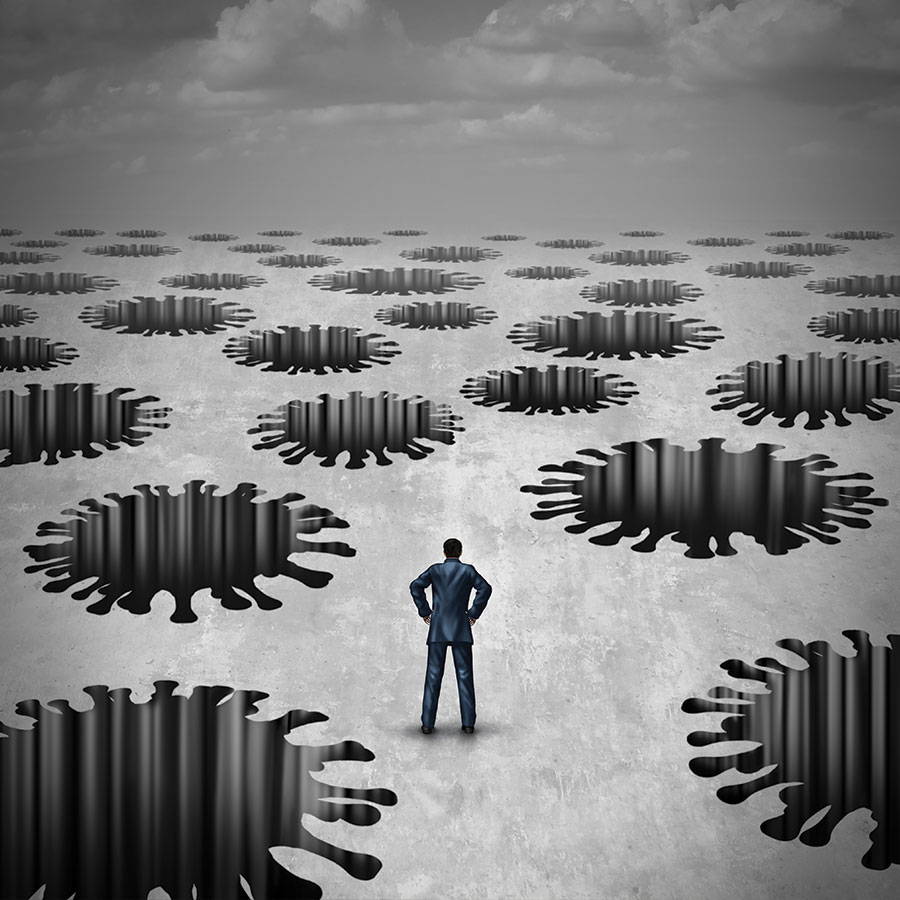 With the Omicron variant spreading across the world, financial expert Gordon Pape looks at how investors can protect their portfolios in the face of uncertainty. Photo: wildpixel/Getty Images

Analysts and economists are taking widely divergent views on 2022.

At one end of the spectrum is JPMorgan Chase, which said in its annual global economic outlook that this year will see an end to the pandemic and a stock market boom.

“Our view is that 2022 will be the year of a full global recovery,” said Marko Kolanovic, the company’s chief global markets strategist, in a note to clients. “This is warranted by achieving broad population immunity and with the help of human ingenuity, such as new therapeutics expected to be broadly available in 2022.”

The result, said the company’s report which was released in December, will be a “strong cyclical recovery, a return of global mobility, and a release of pent-up demand from consumers.”

Great news! But – there’s always a but. “If COVID-19 were to have a prolonged impact — into the medium term — it could reduce global GDP by a cumulative $5.3 trillion over the next five years relative to our current projection,” said International Monetary Fund Chief Economist Gita Gopinath.

That was in October, before anyone had heard of Omicron. Now, just a couple of months later, the latest variant is sweeping the world, hospitals are under siege, workers are calling in sick, and supply chains are under renewed pressure. Suddenly, the outlook doesn’t look quite as rosy.

The reality is that 2022 is a huge question mark, with much depending on the course the coronavirus takes over the next few months. If Omicron turns out to be the last major wave, the glowing predictions from JPMorgan and others could become a reality. But if the virus mutates again and becomes more dangerous, anything can happen.

In the face of this uncertainty, what can income investors do to protect their portfolios? Here are some dos and don’ts to consider.

Don’t sell quality. Unless there is a dramatic change in direction, interest rates will rise in 2022. The US Federal Reserve Board has already signalled that it expects to implement three hikes this year and will start to trim its balance sheet. Many observers believe the Fed will actually raise rates four times. The Bank of Canada hasn’t made an announcement yet but will likely do so soon.

The reason: inflation, which is now running at levels we haven’t seen in years. The effect of rising rates and the end of quantitative easing will undermine one of the market’s main support pillars, which in turn could lead to a sharp correction.

Many income stocks will probably decline in price as a result. The pressure on them will be exacerbated because higher yields on fixed income securities will make them more competitive for investors seeking yield. REITs, fixed-rate preferred shares, and utilities could be especially vulnerable in this situation.

If this scenario unfolds, don’t panic and sell. If you’re holding quality securities, they’ll continue to pay their dividends/distributions. Ignore the day-to-day price movements. The market will eventually change direction again and valuations will recover.

Do buy bank stocks. As a rule, the stock market hates rising interest rates. But there is a notable exception – banks. Higher rates mean enhanced net interest margins (NIMs). This measurement compares the net interest income generated from credit products like loans and mortgages with the interest paid for savings accounts and GICs. The greater the NIM, the more profit a financial institution will generate from its lending activities. Low interest rates squeezed NIMs, but with rate rises pending the margins are about to improve.

There’s another factor at work. From March 2020 until late last year, financial institutions were ordered to suspend dividend increases and share buybacks by the Office of the Superintendent of Financial Institutions. That prohibition was lifted in early November, with a directive to the banks to be “prudent” with their increases. Most responded accordingly, with the one exception being Bank of Montreal (TSX, NYSE: BMO), which implemented a 25 per cent increase. That suggests the other banks have some room for catch-up.

Don’t chase unusually high yields. If you come across a security with a yield of more than 10 per cent, be suspicious. No one gives money away. If the yield is that high, there is probably some underlying risk that may not be apparent at first glance.

I recently came across a small mining royalty company, Newport Exploration (TSX-V: NWX) that is yielding 16.8 per cent, after doubling its quarterly dividend to $0.02 a share last year. The business looks sound, with no debt. But it’s a penny stock (it trades on the Venture exchange), and it operates in a volatile sector. It may turn out fine for investors, but a yield that high reflects the risk the market is reading into its prospects.

Do buy on dips. If, as I expect, we experience a correction this year, take advantage of the opportunity to add more blue-chip income payers at bargain prices. The telecoms are one sector to keep an eye on. BCE, for example, is just a shade off its all-time high, and is still yielding 5.3 per cent. Any slippage would be a signal to add more. It is highly unlikely that conditions would get so bad that the company would cut its dividend.

Don’t ignore GICs. Ultra-low interest rates made GICs a non-starter for most income investors. But that’s about to change. As the central banks raise their key rates, GIC returns will start to edge higher. They will still be low by historic standards, but better than we’ve seen for several years. A GIC ladder out to five years, with 20 per cent maturing and reinvested annually, will provide increasing cash flow as rates rise, while protecting your capital if your financial institution is a member of the Canada Deposit Investment Corp. or a provincial equivalent.

After Another Record Year for the Stock Market, What Can We Expect in 2022