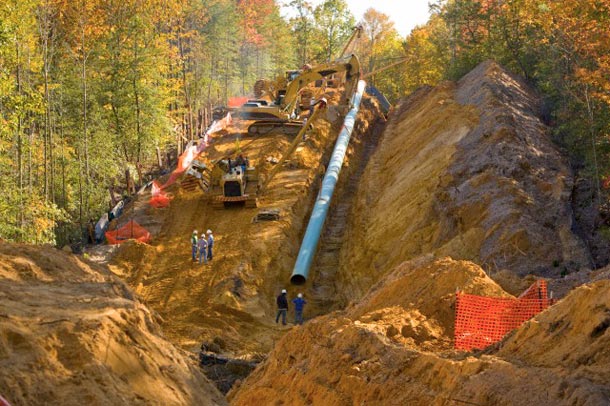 Pipeline being installed in forest --- Image by © William Taufic/Corbis

It’s too bad Las Vegas doesn’t make book on political decisions. It would be fascinating to see the evolution of the odds on the Keystone XL pipeline.

When the plan was first proposed what seems like a century ago, the bookies would have made it an odds-on favourite to be approved. After all, the project brought all sorts of goodies to the table that are dear to the hearts of Washington bureaucrats and politicians: job creation during a difficult economic time, continental oil security, and the chance to cement relations with an ally to the north that often felt taken for granted. What’s not to like? Prime Minister Stephen Harper called it “a no-brainer” and most people would have agreed.

The bookies probably would have posted 25-1 odds against the plan being rejected, with few takers. But how things have changed!

It all started to unravel when Nebraska went ballistic over what it perceived as an environmental threat to a giant aquifer that supplies water to much of the state. TransCanada Corp., the company that wants to build the pipeline, quickly presented a Plan B to route Keystone away from the aquifer, which the Nebraska government eventually endorsed. But the damage had been done. The opposition had been mobilized and Keystone had become a flashpoint. Mass rallies were organized in Washington and elsewhere. Senior politicians joined movie stars in opposing the plan. President Obama, fearing he might lose the critical environmental vote in the 2012 election, responded by punting. The decision would be delayed until 2013.

Even then, it seemed that Keystone was only deferred to a quieter time. But since the President was inaugurated for a second term, the anti-pipeline forces have gathered momentum. The appointment of John Kerry, an outspoken environmentalist, as Secretary of State was viewed with dismay by Keystone supporters. Mr. Obama’s strong environmental commitment in his State of the Union address added to the angst. Last month, the powerful Democratic leader in the House of Representatives, Nancy Pelosi, voiced doubts about Keystone after meeting with NDP leader Thomas Mulcair.

Recently, a prominent California billionaire entered the fray by attacking a pro-pipeline candidate for the Democratic nomination for Mr. Kerry’s vacated Massachusetts Senate seat. Never mind that Massachusetts is thousands of miles away from the Keystone route. Opponents of the plan are showing that can throw their weight around whenever and wherever they want.

If Vegas were tracking this, my guess would be that the current odds would be about 3-1 against Keystone’s approval. And they seem to be lengthening almost daily. The voices supporting the plan are being drowned out.

We are approaching a seminal moment in Canada-U.S. relations. If the President ditches Keystone, it will leave a sour taste that will linger for years and will almost assuredly have an effect on other bilateral negotiations. We might think we will be able to simply move on but it won’t be that easy. In effect, the U.S. would have declared war on Alberta’s future oil sands development — the stated goal of many of the environmental groups opposing Keystone is not just to stop a pipeline but to shut down the oil sands, which they contend are among the world’s greatest polluters.

Alberta would not take rejection lightly. Recently, Alberta Premier Alison Redford, while saying that rejection would not cause irreparable damage between the two countries, expressed the view that it “would fundamentally change the relationship”.

It’s noteworthy that she made those comments during a visit to Ottawa. Alberta is the cradle of the Harper government and her views will certainly resonate with the Prime Minister and his cabinet.

If Keystone is rebuffed, the environmentalists will claim a huge victory. But it will probably be a pyrrhic one. The Gulf Coast refineries will continue to process heavy oil, the difference being that it will come mainly from Venezuela which is hardly the most reliable source right now. The oil sands will still be developed, albeit at a slower rate. More product will move by rail, which poses much greater environmental risks than pipelines. Canada will sharpen its focus on moving more Alberta oil to deep water ports both West and East, knowing that the U.S. can no longer be relied on as a secure market. That means more Canadian oil ultimately finding its way to countries like China. Washington won’t be happy about that but they will have been the authors of that outcome.

Interestingly, Keystone’s fading fortunes are having no impact on TransCanada’s share price. The stock hit an all-time high of $50.08 on March 20 and has been in an upward trend since last fall. Either investors remain unrealistically optimistic about Keystone’s prospects or they have simply moved on.