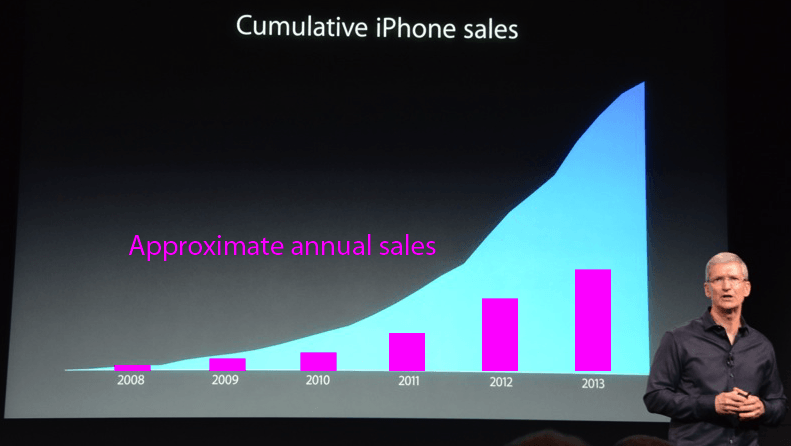 The remarkable thing about Apple’s WWDC event today was how unremarkable it was. And defensive. There were no product category killers like a new smartwatch or a classic Steve Jobs “one more thing” surprise. Instead, Apple showed itself to be more evolutionary than revolutionary, continuing investor concerns that have resulted in a 30% drop in stock value in the past year. Revealingly, at least two Apple executives were on the defensive: CEO Tim Cook claiming “we’ve got lots of innovation left” (while showing the above cumulative sales chart instead of growth) and Marketing SVP Phil Schiller’s aggressive boast “can’t innovate no more, my ass!” Meanwhile competitors like Samsung and Google are setting the pace in innovation, offering bigger screens, more hardware features and Android, a market-dominating mobile operating system that iOS seems a few steps behind.

As expected, the Cupertino company launched two new iPhones, including a higher-end model that replaces a passcode with a fingerprint scanner. The new iPhone 5S picks up from where its predecessor left off — same form factor but with a few improvements.

The other is the long-awaited low-cost plastic model, iPhone 5C. Packing familiar features as the iPhone 4S, the 5C is clearly targeting international markets and younger consumers with an attractive price point matched by attractive colors — from $99, for a 16GB version, and $199 for a 32GB version (with contracts that is). Also targeting kids are the new, radiant cases that Apple is now selling. Whether the new cheap phone will cannibalize sales of higher-end models remains to be seen.

The new version to the operating system that runs iPads and iPhones, iOS 7, was also as expected: a flat but vibrant design that marks a major shift away from the now-dated skeuomorphic style originally championed by the late Job and departed mobile chief Scott Forstall. In addition to its new look, iOS 7 offers 200 new features including the all important ability to change the gender of Siri, the voice-activated digital assistant.  Owners of “jailbroken” iPhones (and Android smartphone) will recognize several of these new features and design. That’s how far behind Apple now feels.

Other highlights include a preview of a new, almost absurdly powerful MacPro, an upgrade of productivity software iWork, OSX (called Mavericks) and a slick update of the popular ultralight notebook Macbook Air (with all-day battery life). Missing were the aforementioned smartwatch and a new Apple TV — two categories that could allow the company to regain its cred as a game-changer.
Perhaps the biggest surprise of the afternoon was neither hardware or software but an executive. Senior Vice President of Software Engineering Craig Federighi used humor, charm and good old fashioned salesmanship to present both OSX and iOS operating systems. With his obvious charisma and Hollywood good looks, Federighi was reminiscent of Steve Jobs. Definitely someone to keep an eye on.