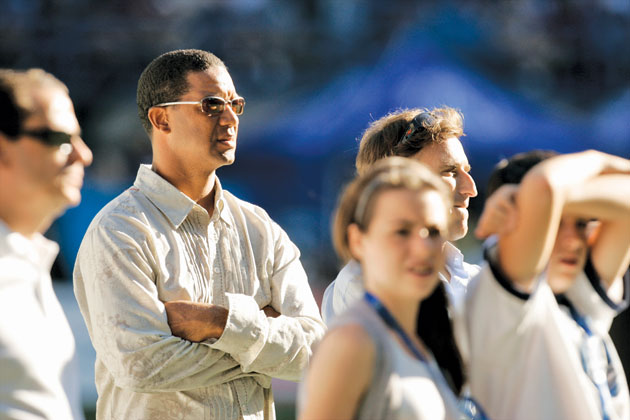 Peter Muggeridge chats with star quarterback Damon Allen as he heads off the field and into the front office.

Damon Allen absorbed a lot of violent tackles over his long and storied football career. But at the age of 44, the Canadian Football League’s most prolific quarterback received the hardest hit of all when he realized his career was finished. Ouch.

Washed up. Unwanted. Thanks for the memories. Now pack your bags and clear out. Essentially, Allen’s company (in this case, the Toronto Argonauts) told him his skills were obsolete, and they didn’t think he could contribute anymore. So at an age when most of us are just hitting our professional stride, Allen was suddenly looking for a new line of work.

For a professional athlete like Allen, the end can be swift and cruel. One day he’s winning championships and basking in fan adulation; the next he’s being pushed out of a job by a younger, faster and stronger athlete, another victim in the cruel Darwinian struggle that prevails in pro sports.

It’s a bitter reality many athletes find too hard to face. Willie Mays, Muhammad Ali and Michael Jordan all played well past their primes, leaving fans with tainted memories — not of an athlete at the top of his game but of one in sad decline. Allen had enough self-awareness to realize his days were numbered. He had played for more than two decades and won multiple Grey Cups and MVP awards. And when he walked off the field for the final time, he did so with the same confidence and pride that typified his playing career.

“My transition [off the field] was a little easier than most,” says the California native, who now resides with wife, Desiree, and their young family in Oakville, Ont. “I gave it my all for 23 years, so I was fine with retiring. I didn’t leave anything on the field.”

“Most people don’t get the opportunities I had as an athlete,” says Allen, whose pro resumé reads like a cross-Canada bus trip, with stops in Vancouver, Edmonton, Hamilton, Ottawa and, most recently, Toronto. “God gave me the gifts to do something special. And I used them to the fullest.”

Turning his sights to post-career reinvention, Allen has decided to stick with what he knows best: football. His new day job is in the Toronto Argonauts’ front office, acting as a special adviser to the CEO and representing the team at golf tournaments and corporate meet-and-greets. He’s also tossing around the idea of getting into the world of sports broadcasting.

“Retirement has also given me a chance to give back to the community,” says Allen, now able to devote more time and energy to his annual Quarterback Challenge, which raises money for children’s charities.

While his post-playing life has been good so far, Allen admits he sometimes yearns for the glory days. “I miss the camaraderie I had with my teammates. Winning championships and overcoming adversity, you develop deep bonds with players. There’s no other profession like it.”

He’s well aware that his on-field accomplishments don’t automatically guarantee off-field success. But if Allen continues to draw on the traits that established him as a future Hall of Fame football player — vision, agility, confidence and intelligence — he’ll likely star in whatever profession he chooses.