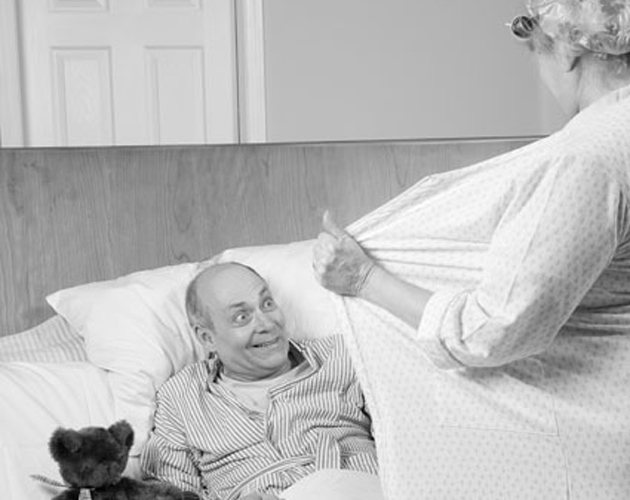 Wrecked your knees playing squash or strained your back water-skiing at the cottage? If your daytime activities have hampered your nighttime pleasure, there’s more than one way to ensure that your love life is no pain, all gain.

Position:
Lying on the side

If a woman has joint pain in the hips, separating the legs can be difficult, so try lying on the side. “This way you can keep your legs together,” advises Chandra Farrer, a physiotherapist at Women’s College Hospital in Toronto.

“There are ways of doing it doggie style, where the woman does all the motions and the man stays still,” says David McKenzie, PhD, a marriage consultant and sex therapist in Vancouver. The goal is to take away as much range of movement in your joints as possible to reduce the amount of pain.

“Avoid activity that puts undue pressure on your spine,” says Tanya Long, national education manager at Osteoporosis Canada. Try a variation on the standard missionary that positions his legs outside hers.

Take a load off your back and hips with a side-by-side position facing each other. “This takes pressure and body weight off the back and hips,” according to Dr. Monique Camerlain, a consulting member of the Department of Rheumatology at the University of Sherbrooke’s medical centre.

Give sore knees a break by lying on your side, back to front, in the classic cuddle position. “Lying sideways means that the person in pain has less movement to perform,” Farrer says. Also try putting a pillow between your knees.

Back or upper body,
hips and knees (him)

“In this position, the woman is on top and carrying her own weight, so the man on the bottom can relax and enjoy,” Farrer says. You can also use pillows to support the knees and head. Or place a rolled towel under the lower back, according to the Healthy Back Institute in Maryland.

Lie diagonally across and on top. If you have “pain in your hips, keep them as stationary as possible,” Farrer says. If your knees have minimum range of movement, keep them around the same angle and you’ll both reap the rewards.

This position is great for a woman who has hip problems and problems straightening her knees, Camerlain says. “Sex is always better when you’re relaxed and pain-free.”

9. Where it hurts:
Knees (both) and shoulder (him)

If you’re both trying to stay off those sore knees, this one’s a winner. “Using a wall or furniture for support, the man enters from behind,” Camerlain says. Also great for shoulder pain, this action can be performed with minimum exertion on the upper body.

10. Minimal mobility:
If it hurts all over (Both)

“People with joint deformity and disability can use a weight-distribution bouncing seat to put them in a more comfortable position to have sex,” suggests Barry Worsfold, an adjunct professor in the gerontology department at Simon Fraser University in Vancouver. Try the Body Bouncer ($199.95 US)