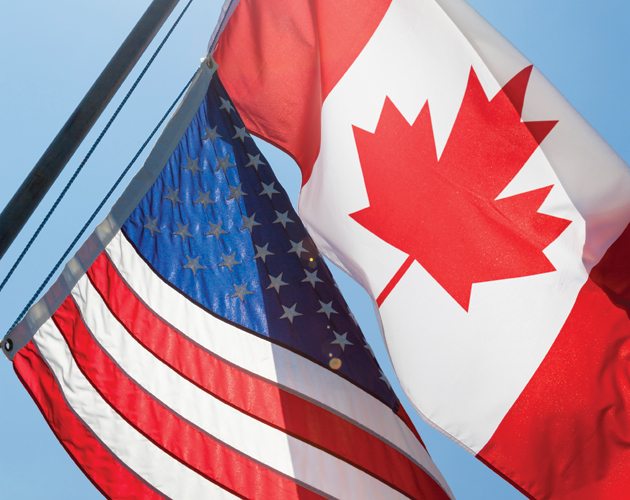 U.S. President Barack Obama recently raised Canadian ire when he referred to England as America’s “closest ally” during the 2012 Democratic National Convention in September. After all, seeing as how we’re border buddies, Canada is literally America’s closest ally.
Plus, we’ve always been loyal friends (save for our scuffle in 1812). Much like a pal who lets you crash on their couch after a fight at home, Canada’s accepted thousands of American war resisters and draft dodgers over the years, dating from the 18th century through 1975 (the last Vietnam War draft). And we never once raised a fuss when Republican presidential candidate Mitt Romney infamously strapped his dog Seamus to the roof of the car and drove to his family’s Ontario cottage, stopping to hose the poor pooch down when the ride made him sick. We’ve even gifted the U.S. with some of our brightest talents, from Jim Carrey and Joni Mitchell to Peter Jennings.

Still, the writing’s been on the wall for some time. Take the joint Keystone XL pipeline plan, abandoned abruptly by the U.S. There’s also Can-Am disputes over West Coast trading posts and Arctic borders, President Obama’s Buy American mantra and President George W. Bush omitting us from a list of allies he thanked after the Sept. 11 terrorist attacks (evidently, our contributions on that day were less memorable than El Salvador’s). Most recently, the Ben Affleck-directed film Argo implied heroic Canadian diplomat Ken Taylor’s 112 citations following the Iranian hostage crisis were not deserved (Affleck later amended that portion of the film to reflect otherwise).

Canada, though, is proving that two can play at that game. England may be America’s “closest ally,” but the Toronto Star recently quoted Prime Minister Stephen Harper calling Great Britain “our oldest ally.” And, to go one step further, we’re moving in with them! Call it a longing for the good ol’ days of colonial rule, but Canada and the United Kingdom recently agreed to share certain embassies. That’s right, it’s like an international buddy comedy – think Faulty Towers meets Bob and Doug McKenzie against the wacky backdrop of international diplomacy.

Perhaps, however, we’re being too sensitive.  Despite tensions at the political level, a 2012 Gallup poll shows 96 per cent of Americans – your average Joe – look favourably on Canada, “the loftiest ranking for any foreign country.” Americans even look to us for refuge in times of despair. In June, the Vancouver Observer noted that slews of Americans took to Twitter, vowing to move to Canada to “get away from ‘Obamacare.’ ”

So they’re a little confused. The point is, they like us.  ­