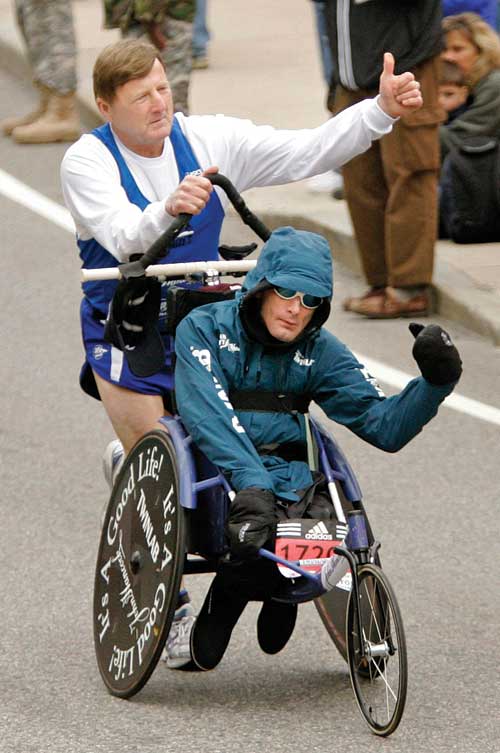 The father who could see his boy as he really is would shake his head and say, ‘Willie is no good; I’ll sell him.”—Stephen Leacock

Mr. Leacock was a wise man and a comic genius, but he never met Dick Hoyt.  Couldn’t have.  Leacock died in 1944 a few years after Hoyt was born.

But if they had met, Leacock would never have said what he said.  Not after seeing Dick with his son Rick.

They are Team Hoyt, and they are athletes with a vengeance. They’re from Massachusetts, and they’ve been running the Boston Marathon since 1981. They biked and ran across the continent — 3,735 miles — in 1992. Well, correction. Dick Hoyt did the running. His son couldn’t. Rick can’t even talk. He’s a spastic quadriplegic. So his dad pushed him in a wheelchair.

For the biking portion of their six Ironman competitions, Dick lugged his son on a seat welded to his handlebars. For the 2.4-mile swimming sections, he towed him in a boat. Dick and Rick Hoyt have been showing up at the starting line for every racing event they could get to for the past three decades. Why? Because Rick loves it and Dick loves his son.

Rick very nearly didn’t make it into this world. He was born with his umbilical cord coiled like a vengeful python around his neck. The doctors saved his life, but it was no storybook rescue. The infant’s brain had been starved of oxygen too long. Doctors told Rick’s parents he would never walk or talk. He’s a vegetable, the doctors said. Institutionalize him and get on with your lives.

Nuts to that, said Dick and Judy Hoyt.

They raised Rick the way they raised their other two unhandicapped boys. When the Hoyt family went to the beach, Rick came too. When they went to the park or the pool, Rick played on the grass and swam in the shallow end. Well, he didn’t swim so much as get towed around by his parents and siblings, but you could tell Rick loved it. He wore a smile as big as the sun. This was the Hoyts’ first clue that Rick was no vegetable — Rick smiled a lot. He “got” jokes. And he loved to watch sports, especially hockey. Dick and Judy pestered university researchers to invent a means of communication that Rick could access. The experts jerry-rigged a computer that allowed Rick to form words and sentences by tapping a switch with the side of his head. His first typed thought? “Go, Bruins!”

The Hoyts didn’t stop there. They badgered unenthusiastic education authorities into letting Rick attend regular public school classes. When his school sponsored a five-mile benefit run for another student paralyzed in an accident, Rick typed: “I want to enter.” Dick shrugged, why not? Sure, he’d never run in his life but, five miles pushing a wheelchair — how hard could it be?

Excruciating, Dick found out. But Rick was transformed. He crossed the finish line in his wheelchair, waving
his arms, kicking his feet, with tears in his eyes and a grin on his face. He typed that “running” was the only time he didn’t feel handicapped.

That was 984 events ago. Since then, Team Hoyt has run 229 triathlons, six Ironman distances, 20 duathlons, 66 marathons and 26 Boston Marathons. At 68, Dick Hoyt is “way past his prime” as a runner, but he has no plans to quit. Why, exactly? Dick is a man of much action but few words. He looks over at his “vegetable” Rick — now 46 years old, a college graduate and a successful businessman. Dick’s eyes well up, his mouth crumples, and he says in a husky voice, “I love my family.”