Stable in the Senate 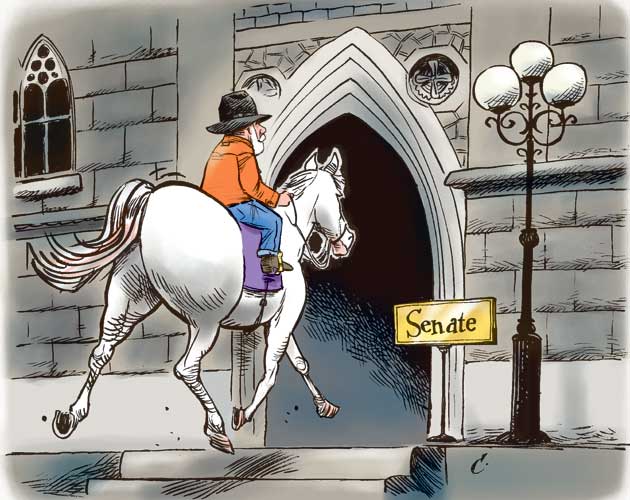 There’s an old joke about the difference between an American senator and a Canadian one: in America, you have to win an election to become a senator; in Canada, you have to lose one. But that’s not true. You don’t even have to be a failed politician to become a Canadian senator; you merely have to make sure your IOU is firmly lodged in the prime minister’s pocket. Party hacks get senate seats. So do backroom bagmen, union functionaries, First Nations figureheads and long-in-the-tooth loyalists notable only for their reflexive genuflections toward 24 Sussex.

Margaret Atwood called our Senate a featherbed for fallen Liberals, but the Tories are no slouches when it comes to rewarding the faithful. Mister Mulroney was a deft hand at dealing out Get-Into-the-Senate-Free cards. Stephen Harper’s a relative newcomer, but already he’s appointed more than a third of the members.

Yes, a majority of those appointed have served nobly and well, but the pork – oops – apple barrel only needs a worm or two to spoil the works and since its inception, the Canadian Senate has been riddled with shysters, charlatans, buffoons and blockheads.

This is a stud who had his entire office crafted in marble. Everything he ate was served to him on hand-carved ivory. For public appearances, he wore garlands of priceless gems. He had a permanent staff of 18 who worked like slaves for him. And gold? He ate the stuff.

Really. The emperor Caligula decreed that Senator Incitatus have gold leaf mixed in with his, er, oats.

Incitatus was a chariot-racing stallion. His stable was made of marble, his manger was carved out of ivory and he really was a Roman senator. His owner, Caligula (who did he think he was – Stephen Harper?), installed him in the Roman senate back in AD 39.

We learned in school that Senator Incitatus was proof of Caligula’s lunacy (and the man was a lunatic – a monster who murdered at whim, committed incest with all three sisters and had himself declared a “Living God.”)

Crazy, for sure, but crazy enough to make his horse a senator?

Crazy like a fox, say some historians. They point out that the Roman Senate (like others we’ve heard of) was a mere rubber stamp endorsing those in power. They suggest that Caligula’s equine senator was really a subtle insult to the most famously gelded political body in Rome.

Canadians are too shy for such bold gestures. We’d never think of installing an actual horse in our Senate.