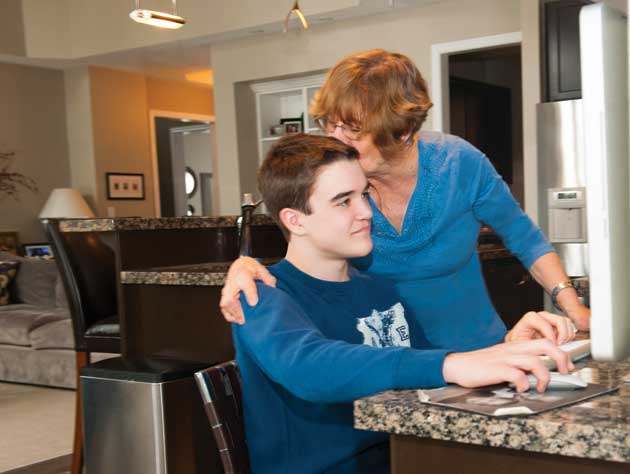 Make a shift in the way you communicate with teen grandchildren.

When my grandson Jack turned 13, he and I went to his favourite restaurant for dinner. Afterwards, he said, “This will always be our restaurant, Grammie.”

But this year, it’s different. He just turned 16 and he doesn’t really want to be seen anywhere with me. In fact, the only bond we share these days is the one where we poke each other on Facebook. I guess it’s his way of saying, “I know you’re there. I still love you but I really don’t want to acknowledge you right now, especially in front of my friends.”

I admit I was devastated at this dramatic change in a relationship where we had always shared secrets and basically enjoyed mutual adoration since the toddler days. I was the cool grandmother who took him to Disneyworld when he was six and to see The Hangover (part 1) when he was 12. I got in deep trouble with my daughter for that, but in Jack’s opinion (“Grammie, it wasn’t embarrassing. We learn about that stuff in school.”), I was the “best ever.” Frankly, I can live with my daughter’s reproach as long as I can bask in Jack’s approval.

When I wailed to my grown son that I’d “lost Jack,” he told me, “Get over it. He’ll be back in a few years. I was embarrassed to be seen with you and dad when I was 16. And hanging out with my grandparents? Forget it!”

And, yes, I understand about hormones and the authority of peers but, selfishly, I miss that feeling of beatification I once enjoyed with my first grandson.

Richard of Perth, Ont., understands. His only granddaughter, Shelby, just turned 13. “She was the proverbial apple of my eye from the day she was tiny,” he says. “She always wanted to cuddle with her gramps. We spent many wonderful times fishing, reading together, playing games. But now, she looks at me as if I’m invisible or, if I make a comment, I see her rolling her eyes.” Shelby’s interests now include hanging out at the mall with her friends and texting boys she likes. “I thought I was the only ‘boy’ she’d ever like,” laughs Richard.

Rhonda of Halifax had the same feelings when she felt her grandchildren slipping away as they entered their teen years, but she was determined to do something about it.

“I realized it’s not something I’ve done. They’ve changed, and the fact is they’re a pretty self-absorbed lot, so the answer was to learn about their world,” she explains. “They face very different challenges than we or our children did growing up. I started listening to their music, doing a bit of research into communicating with teens and I’ve found when I casually mention having heard a band they like, their ears perk up. As far as I’m concerned, that’s a sign that grandma isn’t such an old fogey after all.”

Other grandparents have experienced the same need to make a shift in the way they communicate with teen grandchildren. While grandkids may think grandpa can’t possibly understand what they’re going through, they’re often surprised to learn grandpa had similar challenges as a teenager. “My grandson Jacob just made the school football team,” says Brian of Calgary. “I reminisced one day about my early years as a quarterback in university, and Jacob was full of questions. That common interest opened our relationship up on a whole new level.”

Sharing experiences as well as family history does work to engage teenagers. We are, after all, the keepers of the family history. Tales of common interest such as high school antics, peer pressure and courtships of the opposite sex will engage teens, and sharing remembered feelings of anxiety and fear will help them realize they aren’t alone.

Jack has been applying for summer jobs. I’ve been helping with his online resumé. When he told me he really didn’t want to work at the closest neighbourhood store because his friends might come in and would definitely make fun of him, I related a similar experience working as a cashier when my peers came through my line. I was embarrassed about the fact that, even with a degree, there I was working in what appeared to be an unskilled job. My friends didn’t say anything or make fun of me, which was really worse because I felt even more humiliated at not being able to explain myself. Sharing my embarrassment with Jack brought back a hint of the bond we’d had in the past as I saw, out of the corner of my eye, a glimmer of a smile.

Maybe I should share with him the story of driving my dad’s car without a licence or his knowledge when I was 14. His mom might not think it’s cool, but I bet Jack would.