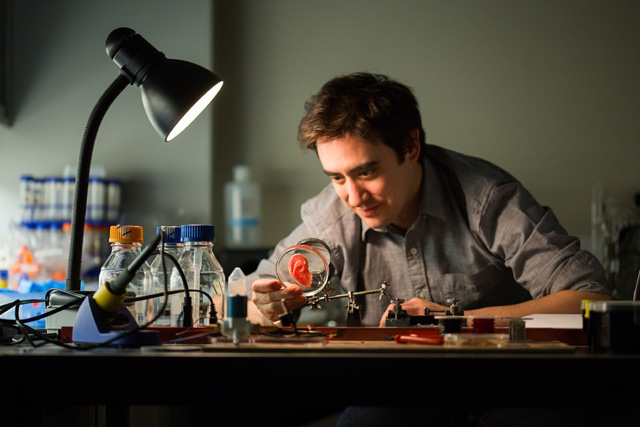 Dr. Andrew Pelling at work with an artificial human ear grown from fruit.

Idealists united on Wednesday, June 14 for the launch of ideacity 2017, talking everything from head transplants to radical life extension to biohacking and futuristic food. We’ve got a rundown of some of the day’s most fascinating theories, revelations and statements.

QUOTE OF THE DAY: “When you see something that peaks your curiosity, I challenge you to silence that voice and pursue it ferociously.” — Dr. Andrew Pelling (pictured above)

WHAT WE LEARNED TODAY: Human organs can be grown on fruit, radical life extension could offer a “cure” to aging and head transplants might be a thing of the future.

QUESTIONS WE STILL HAVE: Does this mean that, by ideacity 1000, we could have a 900-year-old guest speaker with a 20 year-old body and replacement ears grown from apples?

* “Occasionally, there’s a rebellion. Margaret Wente actually sat down on the stage and kept going. She wouldn’t move.” — Moses Znaimer on ideacity speakers who attempt to present for longer than their allotted time.

* Dr. Shaf Keshavjee, director of the world-famous Toronto Lung Transplant Program, who showcased a machine that kept a pig’s lungs “breathing” on stage, discussing the possibilities for removing human lungs, treating them for diseases and then transplanting them:

“Our goal at the lab is to create lungs that will outlive you. We’re really transforming how transplantation will be carried out worldwide.”

* “Aging is humanity’s biggest problem by a long distance because it causes the most suffering. Aging causes 90 per cent of the ill health that exists in the industrial world. It’s up around 70 per cent worldwide. This is not a first world problem anymore. That’s important to understand.” — Dr. Aubrey De Gray, on radical life extension

* “The aging of a car and the aging of a human being are fundamentally the same process. Any machine with moving parts is going to damage itself as a consequence of its normal operations. And that damage is going to accumulate …Eventually there’s too much damage and the machine’s functioning begins to go downhill indefinitely. That is aging.” — Dr. Aubrey De Gray, on radical life extension

* “We’re only 20 years away from having genuine control over aging via this maintenance approach. We can classify the types of damage we need to fix …and in some detail how we might go about [doing this]. Stem cell research, for example …We’ve published a number of high profile papers over the years but the point is, it’s all getting to be understood and accepted.” – Dr. Aubrey De Gray, on radical life extension

* “One of the new forms of reproduction we’re going to see: taking skin cells and being able to generate sperm and eggs …It may be possible in the near term to take cells from a man and be able to create eggs …I could give a sperm sample, they could make an egg out of my skin cells, and I could become a parent all by myself.” — Dr. Michael Eisenberg on new forms of reproduction

* “Could you actually take an apple, carve and ear and use it in the same way as has been going on for 20 years. And it turns out, yes you can …I think what we’ve discovered here is an opportunity for artisanal, hand-made, organic hipster body parts!” — Dr. Andrew Pelling on biohacking

* “Why did the chicken cross the road halfway? She wanted to lay it on the line.” — Humanoid robot BINA48 telling a joke to the crowd

* “New ideas generally come from hard problems and a multidisciplinary approach,” said William Sikkema, whose talk on head transplants illustrated how this once unimaginable procedure not only is possible today, but is actually being attempted later this year. A wheelchair bound man with a terminal neurological disorder will undergo the surgery, with his head being transplanted onto the able body of a brain dead donor. Sikkema says of the hopeful success and spread of this procedure: “This would allow people who are quadriplegics and paraplegics to walk again.”

* “We’re shifting from hunters and gatherers, to agriculturists, to meat-builders.” — Ethan Brown, who runs a company that developed the first ever plant-based burger that looks and tastes like a meat burger. An audience taste test gave the plant burger multiple thumbs up.

* “3D printing is being explored as a way to create personalized food, or beautifully architected food.” — Food Futurist Irwin Adam on the future of eating

* “Our gut plays important role in our brain; people with bowel disease have higher risk of anxiety or depression …I’ve started to see my mood as less external—sometimes moods occur from within.” — Author Dr. Giulia Enders discussing the secret life of the gut