Nancy Pelosi: A Powerhouse In Politics and Fashion 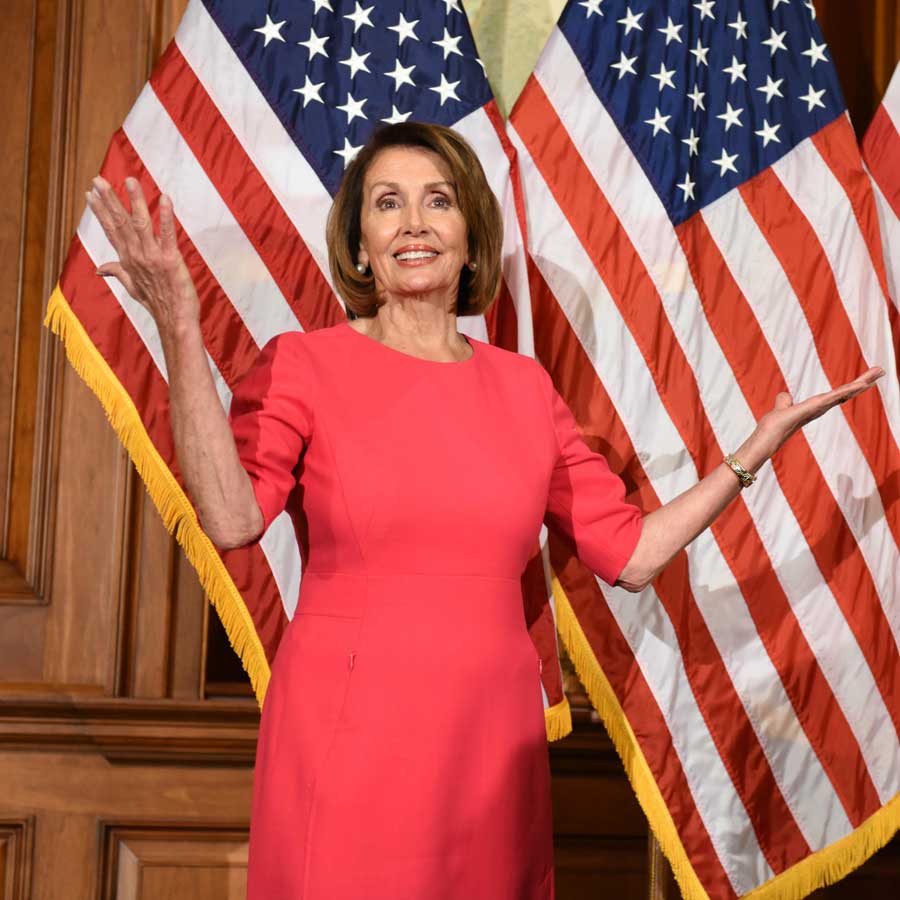 Nancy Pelosi slayed in hot pink on Thursday as she seized the gavel as Speaker of the House of Representatives. It was a deliberate and purposeful fashion choice. This second time, as the most powerful female politician in the United States and the Constitutional equal of the president, she is going in with a bang.

At 78, a mother of five and a grandmother of nine, she is no longer accepting the more traditional matriarchal mantle — in fashion or in voice. When she won the speakership in 2007, the first woman to hold the office, she surrounded herself with grandchildren and wore a very nice, tailored burgundy skirt suit.

That suit, and the gavel she took up that day, are now in the Smithsonian.
But Pelosi herself is very much un-retired. Leading a historically diverse freshman class of more than 100 women into battle—a congress convened, as she noted, on the 100th anniversary of American women getting the right to vote—her raging pink dress cranks up the volume to 11 on pussy protest hats and soft millennial pink.

Subverting a traditionally “female” colour, she deployed symbolism as neatly as her younger colleagues. The youthquake member from the Bronx, Alexandria Ocasio-Cortez, the youngest women to ever serve, wore suffragette white along with Madeleine Dean. There were many other firsts, and deliberate fashion choices to highlight them: a hijab and a Palestinian thobe, Native American and African-American touches.

And then there was the brilliant new Arizona Senator Krysten Simena, who is openly bisexual and who went for a big, bouncy blonde hair look topped with an irreverent fur stole and a campy hobble skirt to shake up the navy-suit boys club.

Women of a certain age often feel forced into background, or even invisible. This week, Pelosi reclaimed that space, and then some. She has always been a sleek dresser, though she tended, as was the norm among females breaking into the halls of political power, to wear pantsuits. An Armani aficionado, she once described her pantsuit collection to Elle magazine as “endless.” She has also been noted for her collection of excellent scarves.

She once disdained the fashion game, blowing off Pulitzer Prize-winning Washington Post fashion journalist Robin Givhan when asked “who” she was wearing to a State dinner circa 2009. But she has since learned the power of a great outfit, and the press it draws.

It was the knee-length, funnel-neck, exquisitely on-point burnt-orange Max Mara coat she wore out of that fateful early December meeting with Chuck Shumer and President Donald Trump in the Oval Office that really shifted her image from generation has-been to modern power symbol.

Seriously, after she told off Trump with a pithy rebuke — “Don’t characterize the strength I bring”— she brought the power of iconography to bear. Turning on her (chic, nude, Weitzman stiletto) heel, she put on some no-bullshit sunglasses and wielded that coat.

A thousand memes followed, including the sassy account @excellentcoatsonirritatedwomen, which cites the Pelosi strut-to-the-scrum moment as its muse. It hearkens back to the moment Hilary Rodham Clinton first became hip via meme, when she donned dark sunglasses to read her Blackberry soon after she was named Secretary of State.

Pelosi made her name as a deft negotiator. In her first tenure as speaker (2007 to 2011), she deployed some dark arts to ram through bills: Affordable health care being her signature accomplishment, along with the Wall Street bailout and gays in the military.

This time she is out for legacy, up against an irrational president and a divided leadership and country. On CNN, she was asked whether she felt she was President Trump’s equal. She replied, “The Constitution does.”

A hint at what she will wear came the day before the new Congress was sworn in. A very neatly tailored (as always) slim beige pantsuit. Every day breast-plating, but make it chic. As she also told CNN: “I put on a suit of armour, eat nails for breakfast.”

Now that is the image of the ass-kicking grandmother we need right now.