Marc Jacobs Gets Married, and It’s the Gay Wedding of the Century 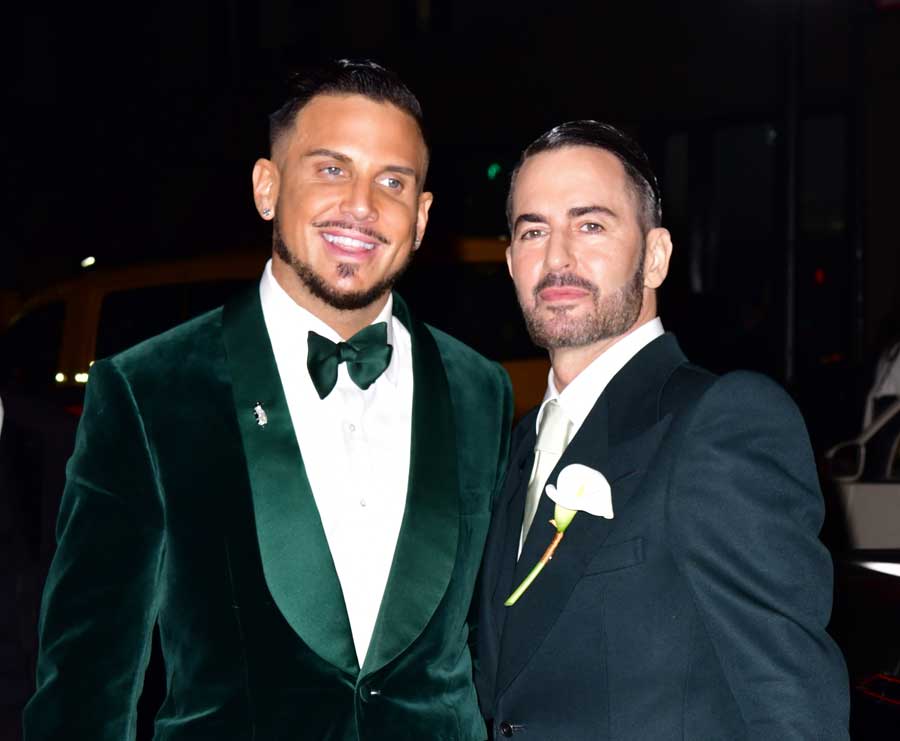 Char Defrancesco and Marc Jacobs arrive to The Grill and The Pool on April 6, 2019 in New York City. (Photo: James Devaney/GC Images)

Marc Jacobs celebrated his union to Charly “Char” Defrancesco with a lavish wedding reception last Saturday night with some 700 guests in attendance. The New York City nuptials brought out a crowd one might typically see at one of the designer’s legendary fashion shows — a mixture of fashion royalty, music legends and drag queens. Except, instead of a catwalk, the guests brought the fashion, the fabulousity and a flotilla of fun.

Jacobs and his husband arrived in a vintage Rolls Royce, both dressed in Savile Row suits, at the historic Seagram Building in midtown Manhattan. The celebrations, which took over the two celebrated restaurants in the building – the Pool and the Grill,  involved much dancing, drinking and revelry.

The evening included a troupe of Broadway-level dancers twirling to the classic Luther Vandross song, Never Too Much — as they ushered Jacobs and his husband toward a five-tiered wedding cake.

Jacobs is no stranger to such theatricality. When he first proposed to Defrancesco a year ago, he did so in a Chipotle restaurant, accompanied by a flash mob. According to reports, the duo first met at a party. Defrancesco has worked at various careers including bartender and interior decorator.

But the seemingly fun-filled and lavish wedding with the star-studded guest list also marks a cultural milestone not only for the gay community but also for the fashion industry. Some of the most celebrated fashion designers in modern history were gay men, but some never publicly acknowledged it, much less celebrated a same-sex relationship in such a highly publicized manner. While the legalization of same-sex marriage across America in 2015 has certainly help lift the visibility of gay relationships, the Jacobs/Defrancesco marriage heralds a new era and changing attitudes within the fashion industry.

Despite the cliched image, the world of style has always been one populated by and welcoming of LGBTQ members. Many gay designers behind mega-global brands kept their personal lives shrouded in privacy. While industry-insiders might have been privy to exactly who was living together in same-sex bliss, the general public was never media-fed that info, along with accompanying multi-page lifestyle spreads of a major designer and his male companion happily at home.

In the past, there was a belief that suggested a gay male designer leading a flagrantly homosexual lifestyle would damage his label’s image. Looking back in history, some of these designers – while never denying they were gay – were often photographed, surrounded by a number of super-stylish women, often in the guise of muses. models or moneyed clients. Back in the 1970s, Halston had his Halstonettes, a cabal of his favourite models who accompanied him everywhere he went, whether it was the dance floor at Studio 54 or the beaches of Acapulco.

In that same era, Yves Saint Laurent was perhaps most publicly associated with his cabal of chic muses – Catherine Deneuve, Betty Catroux, Loulou de la Falaise –  than with his long-time romantic and business partner, Pierre Bergé. But much later, after Saint Laurent died in 2008, Bergé spoke openly about his long-time relationship with the designer in the documentary film, L’Amour Fou (Crazy Love) and also in a series of published letters.

While Giorgio Armani is a behemoth in the menswear industry, few fans can claim to know he had a long-term partner by the name of Sergio Galeotti, who died of a heart attack in 1985. The glamorous designer Valentino had a romantic and business partner in the equally glamorous Giancarlo Giammetti. But it wasn’t until the 2012 documentary, Valentino: The Last Emperor, they publicly revealed much of their life together. While the two had stopped being lovers for almost 40 years, they remained so close, they seemed like an inseparable couple.

Bill Blass was the designer behind a brand that was doing $700 million a year and was often seen squiring around  town some of New York’s society grand dames – Pat Buckley, Brooke Astor, Nancy Kissinger. He was also friends with several First Ladies during his more than six decade-long career. While he never kept the fact he was gay a secret, when he died at age 79 in 2002, no one knew if he had a partner or not.

It can certainly be argued that for most of these men, after being in the public eye for most of their careers, they longed for some privacy in their personal lives. After all, not everyone can be an extrovert like Jacobs.

But the times are changing. Gay marriage doesn’t have to be a complicated issue. It can be whittled down to one thing – the right to publicly declare your love for another person in front of friends and family. Which is what Jacobs did on that glamour-filled evening.

The New York Times reported Jacobs’ actual wedding ceremony took place on Friday in front of  a smaller and more intimate group. But a video of the ceremony played at the Saturday night party and showed the designer (who will turn 56 years old on April 9)  saying of Defrancesco, “In my darkest and loneliest moment, you came into my life like some giant happy baby and made me laugh and smile. What you have given me that I’ve never had before is the dream of a happy forever. And I promise you I will never, ever float away.”

And guests literally took away those heart-felt words. At the end of the evening, each guest received a gift bag that included an oversized hoodie with the embroidered words, “Don’t Float Away.”