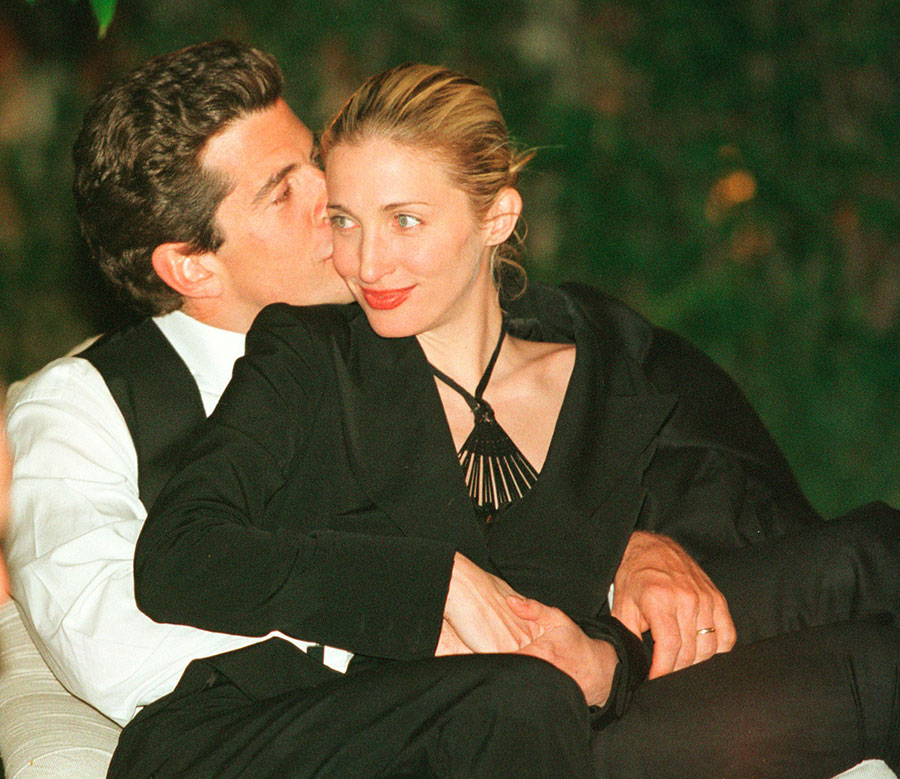 John F. Kennedy, Jr. editor of George magazine, gives his wife Carolyn a kiss on the cheek during the annual White House Correspondents dinner May 1, 1999 in Washington, D.C. July 16, 2000 marks the one year anniversary of the plane crash which killed Kennedy, his wife and sister-in-law. (Photo: Tyler Mallory/Liaison)

Her fashion reign was brief but the impact was long lasting.

It has been 20 years since Carolyn Bessette-Kennedy died in a plane crash, along with her husband, John F. Kennedy Jr. and her sister, Lauren. The trio were on their way to a summer wedding when the plane piloted by JFK Jr. went down off the coast of Martha’s Vineyard.

Tall, leggy and blond, Bessette-Kennedy was often described as an icy beauty and she came to define the minimalist chic of New York City in the 1990s. As brief as the spotlight on her was  — her marriage to JFK Jr. was merely two and half years old before the tragedy — the mystique of her looks, self-possession and inimitable approach to dressing continues to be imitated. There are a slew of Instagram accounts dedicated to her and much like her mother-in-law, Jacqueline Kennedy-Onassis, her style not only defined a look but an era.

Bessette was working as a VIP liaison for Calvin Klein — it was said that the designer himself was inspired by her take on his clothing — when the world’s most eligible bachelor and People’s Sexiest Man Alive came in for a suit. Soon the press spotted the topless hunk with a new blonde rollerblading in Central Park or on his boat in Hyannis Port, site of the famed Kennedy compound. Then she was still sandy blond, not almost platinum, and she was wearing sporty sweats and roomy t-shirts, much like her paramour himself. But once they were publicly official and attending formal events with him either to do with the Kennedy family heritage or to promote his nascent politics-meets-pop-culture magazine George, her style bona fides — strict, streamlined, devoid of ornamentation except for a splash of red lipstick — captured the imagination. Off red carpets, she was bedeviled by the ravenous paparazzi horde and we couldn’t get enough of her easy but smart street style.

Despite being the most photographed couple on the planet, they somehow managed to keep their wedding plans a secret.  Held in a small church on an island off the coast of Georgia,  the one photo released to the media of their nuptials single-handedly changed the bridal fashion industry. Her wedding dress designed by close friend,  Narciso Rodriguez, a bias cut slip-like gown, put an end to big pouffy wedding dresses and ushered in a time of pared down elegance. Her wedding look cemented her status as a style icon.

Today, designers still reference that iconic look as do new icons. Before she even met Prince Harry, Megan Markle had said that her favourite wedding dress was Bessette-Kennedy’s, and both her bridal looks took a page out of Bessette-Kennedy’s playbook.  Instagram was quick to point out that Markle’s bateau-necked Givenchy wedding dress had similarities to a white Versace gown that Bessette-Kennedy had worn to a gala event, and Markle’s evening reception dress had the fluidity and feel of Bessette-Kennedy’s wedding dress itself. In fact, the black top and camel skirt with boots that Markle wore on her first official royal engagement mirrored the ensemble Bessette-Kennedy wore after she returned from her Turkish honeymoon, to stand by her husband’s side on their apartment building steps as he vainly asked the gathered paparazzi to give his new bride, not born into fame as he was, privacy.

Though Bessette-Kennedy wore the most high end labels fashion had to offer, from the aforementioned Versace to a favoured Hermes bag, her choices were not obvious and veered towards simplicity. One memorable look, also adopted by Markle, was a clean white shirt and a fluid black maxi skirt, worn with the insouciance of jeans to a gala. Her choices could also be esoteric — interesting Yohji Yamamoto suits and clever Lanvin dresses more likely than not in New York City black.

Her resolutely understated style has had an ongoing, echoing impact as the years have gone on.  Even as she struggled with the pressure of being “the one,” her appearance through the armour of her clothes never showed a picture that was anything but perfect.

Though she never got the privacy she craved — in her life with America’s prince or in her tragic death — her style remains hers and hers alone.