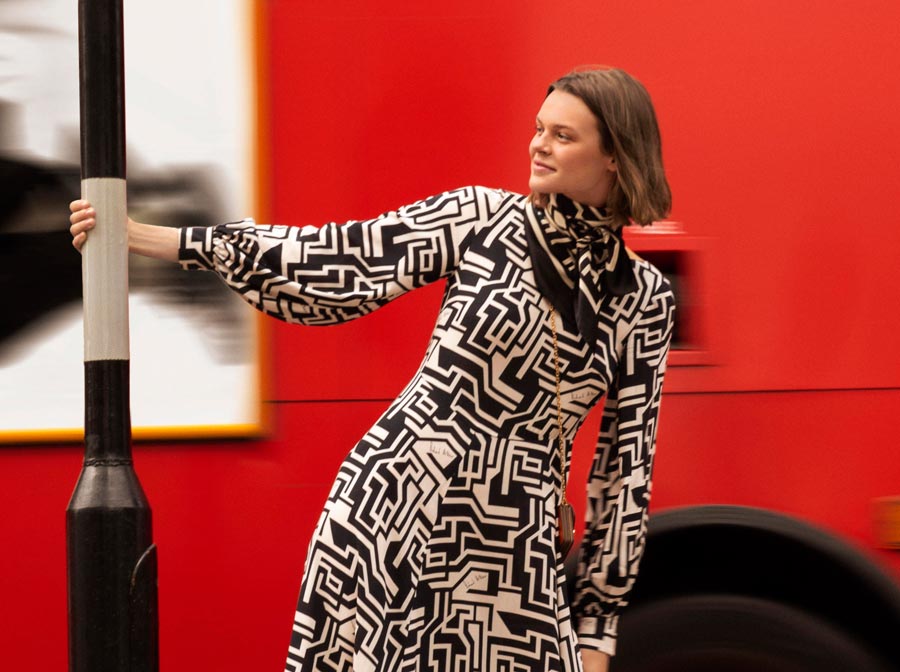 H&M announces a collaboration with British brand Richard Allan, founded in 1962 and renowned for its innovative scarves in bold designs and vibrant colours. Photo courtesy H&M.

Five decades later, the Swinging Sixties of London continues to inspire the fashion world and now an entirely new generation is about to discover a long lost designer from that era.

This week, H&M is set to debut an exclusive collection with 1960s British designer Richard Allan. If the late designer’s name does not resonate as much as other fashion icons of the youth quake era such as Mary Quant and Ossie Clark, it’s most likely because Allan poured all his print-making design skills into one category: silk scarves.

Founded in 1962, the Richard Allan label was renown for bold headscarves featuring kaleidoscopic patterns and vibrant hues. His graphic designs and sense of colour were so impactful, some of the leading couture houses at the time, such as Yves Saint Laurent and Schiaparelli, recruited him to work on their accessories. The legendary fashion editor, Diana Vreeland, who was working at Harper’s Bazaar at the time, also commissioned him to design a special scarf for the magazine’s readers. (Interestingly, the UK magazine is once again collaborating with the brand to re-release the 1964 scarf this fall.)

But after the company was sold in the 1980s, much of the late designer’s work was lost or destroyed. His daughter Cate Allan revived the brand in 2014 and has spent considerable time tracking down originals to re-build her father’s archive and legacy.

The H&M X Richard Allan collection features some of his original prints but interpreted for a lineup of dresses, skirts and tops. And of course, a few square scarves.

“It is wonderful to know that my father’s prints will be worn by a whole new audience. Many of his colourful designs are as relevant today as when first conceived from the 1960s to the 1980s and H&M’s re-interpretation for the 21st century is an inspired creation,” said Cate Allan, in a release.

Whilst the statement-making prints and vivid colours will win over young trendy types,  the collection also holds much appeal for older fashionistas. The easy fluid blouses, the midi-length dresses, the accordion pleated long skirts are all generously proportioned for an older figure and boasts a certain level of sophistication.

You might have left your Swinging Sixties sensibilities behind but this is perfect for the bourgeois you’ve become.

The H&M x Richard Allan collection is available from August 22nd at select H&M stores and online. Have a peek at a few selections from the collection below.