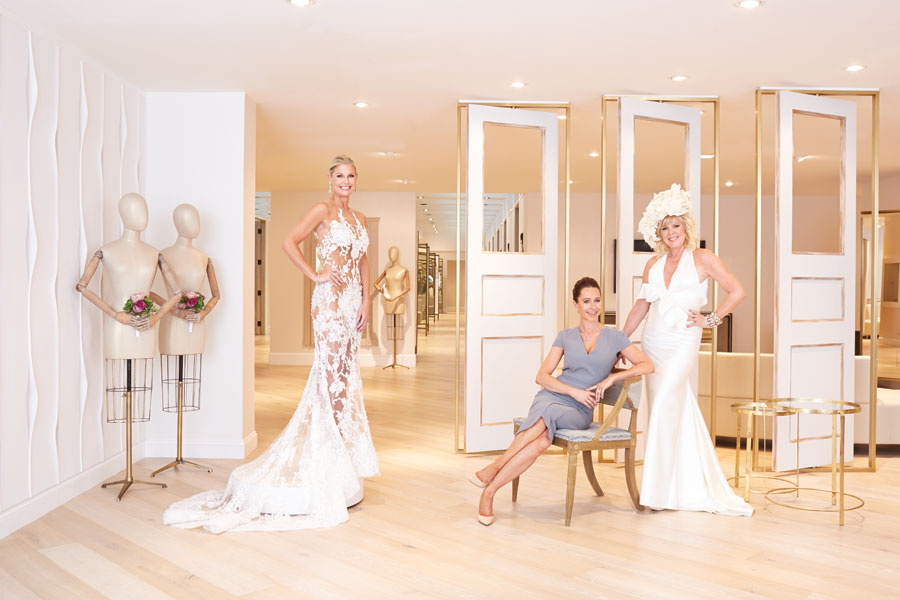 Meghan Markle wasn’t the only bride taking a second trip to the alter. If you’re always a bride or getting married for the first time long after your blushing days are over, you might as well go all the way and break dated wedding dress rules.

You’ve been there and done the Big Fat Wedding and you might have even fulfilled the Princess Bride fantasy with a big poufy gown. But that marriage went the same way as the VCR, and now you’re about to do it again. The question is what do you wear for an encore wedding?

While societal conventions once dictated second- or third-time brides (not to mention first-timers of a certain age) adhere to certain sartorial rules, like keep it understated and no white, today another trip down the aisle is one blooming with endless possibilities. “Anything goes,” declares Jessica Mulroney, PR, marketing and events for Kleinfeld at Hudson’s Bay, one of the largest luxury bridal retailers in the world, which opened its first Canadian location, a 20,000-square foot salon at the Hudson’s Bay flagship store in Toronto. “Bridal is so different today, and there is so much out there. As second marriages become more common, women are saying, ‘Why the heck not? I’ll do it better and bigger.’ ”

In other words, when it comes to their encore weddings, brides are breaking all rules and traditional matrimonial conventions. Take Tina Turner, who tied the knot in 2013 at age 73 to her longtime beau in Switzerland. She opted for an emerald green and black silk tulle gown by Giorgio Armani, which she wore with leggings. And she insisted that her guests be the ones to wear white. Then there’s Tina Knowles, the mother of Beyoncé and Solange, married for the second time at age 61 and opted for traditional white, albeit, a slinky, sexy gown that had a thigh-high slit and was accessorized with a gold belt. Of course, matrimonial-fashion trailblazers date further back. We need look no further than Elizabeth Taylor, a woman who knew a thing or two about repeat marriages — eight in total. But it was dress No. 5 in 1964 (her first of two marriages to Richard Burton) that remains the most iconic. Fresh off a scandalous affair (both were married) while filming Cleopatra, they quietly married in Montreal, where Taylor wore a canary yellow chiffon outfit, accessorized with an emerald Bulgari brooch and a veritable bouquet of hyacinths and lilies in her hair. However, the once most reviled woman in Britain deftly won over the nation looking radiant in a pale blue gown with an embroidered overcoat and a fantastic feathered creation by Philip Treacy crowning her head.

Closer to home, it’s easy to appreciate that less notorious mature brides would also want to try a different approach.

Jennifer Bassett, 41, who owns Toronto-based event-planning firm, Bassett Events Inc., is in the process of planning her second nuptials this summer. “My first one was very traditional and was basically planned by my mother. I was 28 years old, marrying my high-school sweetheart, and it was a church wedding with seven bridesmaids,” she says. “This time around I see it as a very adult, sophisticated party.”

After several visits to Kleinfeld, she decided to go custom and have her dress made at the same place her sisters got theirs, Valencienne Bridal. It’s blush pink, fitted, backless and with cutouts at the side. “It’s something I would wear to the Oscars,” she laughs.

Ann Layton, owner of Siren Communications, a Toronto-based PR firm, who had a commitment ceremony on the tropical island of Tobago with friends and family earlier this year, decided to wear a sari in honour of her partner’s Indian heritage and his parents. The colour was blue, a reflection of her love of the Caribbean sea.

The only rule she acknowledges when it comes to bridal attire is it should be age-appropriate. “As you get older, don’t try to emulate that young bride.” In other words, be true to yourself.

So, the answer to what does a second-time (or more) around bride wear? It’s anything she wants. “Why should it be less meaningful or less important to look a certain way?” adds Mulroney, who believes the second or third time around should be just as important if not more than the first. “It should be a celebration of love and that time in your life.”