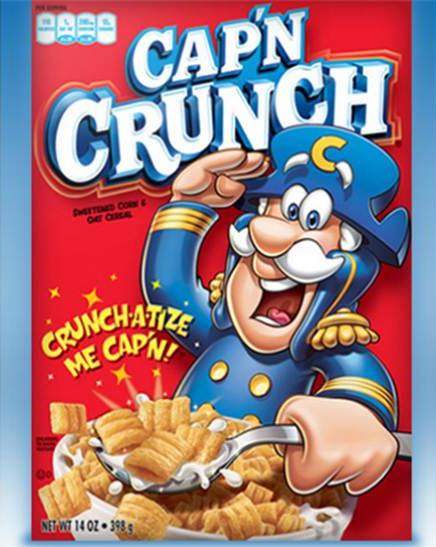 Those who charge that the art of investigative journalism is dead haven’t met Charisma Madarang, the writer who blew the lid off what can only be described as “Cereal-gate.”

You see, Madarang, turned cereal aisles across North America on their heads when she revealed that beloved breakfast icon Cap’n Crunch may not, in fact, be a Captain at all. The Toronto-born journalist noticed that the Cap’n only has three yellow stripes on his jacket instead of four, marking him a humble “Commander.”

The story picked up traction, prompting the Cap’n himself to do what any other high-profile celebrity does in the face of an impending PR crisis: he took to Twitter (and yes, Cap’n Crunch has a Twitter account).

“So much fuss about my name. O, be some other name. What’s in a name? That which we call Cap’n Crunch, by any other name would taste as sweet,” the Cap’n/Commander wrote.

This story took an even more bizarre turn when Colonel Sanders, the Kentucky Fried Chicken mascot, took to Twitter to rally support for the Cap’n (you can’t make this stuff up).

“Folks we’ve got a situation. Please go show our friend @RealCapnCrunch some love. We honorary title folk have to stick together!” the Colonel (if he really is a Colonel) tweeted.

Loyal fans of the Cap’n, who clearly have no idea that there are real crises unfolding in the world, are also rallying to his side, employing the hashtag #TeamCrunch.

@Moltrey wrote: “@RealCapnCrunch This indignity must not stand. You’ve got more Cap’n in ya then anyone to grace the seven seas. #TeamCrunch now and forever!”

@HappyAbobo added: “@RealCapnCrunch I would follow you to the very ends of the earth, across untold leagues of soggifying milk.”

Oh boy. Yes folks, these are real people (and there are many more) pledging their allegiance to a fictional cereal mascot. And yet getting the majority of citizens to vote in real elections is like pulling teeth.