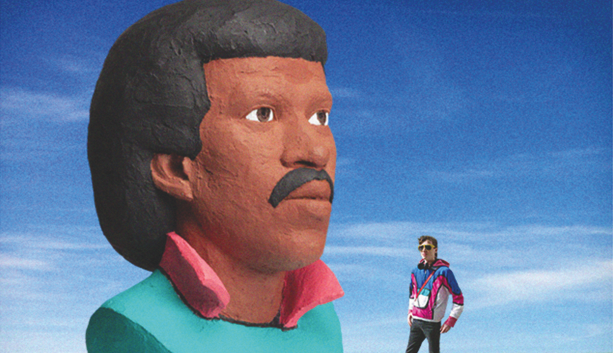 Most assume that celebrities have big heads, but this is ridiculous. Legendary singer Lionel Richie is set to receive a strange tribute at the upcoming British music fest known as Bestival: a giant inflatable likeness of his head.

Oh, and did we mention the head plays Ritchie’s classic tune “Hello”? And that the head doubles as a bedroom?

“We’re not criticizing him,” Hungry Castle art director Killian Cooper told Metro newspaper when asked if the head represented Richie’s ego. “The main inspiration was the end of the ‘Hello’ music video, which is a little disturbing when he is technically stalking a blind girl, who sculpts a bust of his head.”

The head reportedly cost $15,000 to make – money the group raised via crowdfunding website Kickstarter. Cooper also told Metro that, “There are two Australian guys travelling from Melbourne who bid £1,000 to spend a night in the head. It will be full-on luxury in there, decked out with champagne, so I expect romance. Maybe they will bring girls in or just get to know each other better.”

As for the real-life Richie, Time Out magazine noted that the singer “asked for the head to be at his British Summer Time performance in Hyde Park, but, sadly, it won’t be ready in time.”

In the same article, Richie noted that if his real head contained a phone like the inflatable one does, one person in particular would be on the other end of the line.

“Probably my mother. You don’t really realize the value of having people around every day until you don’t have them any more. So it would just be one of those relaxing conversations with someone who represents your comfort zone and who knows you better than anyone.”