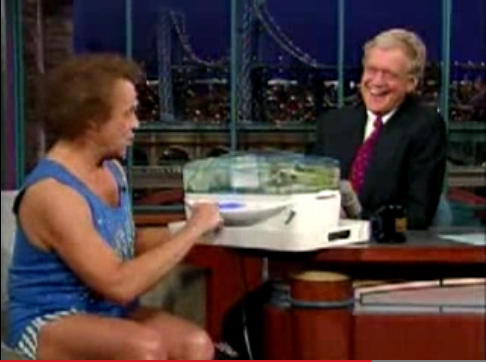 When Johnny Carson, signed off from The Tonight Show for the final time in May, 1992, it marked a seismic shift in the late night landscape. The king was retiring, and the rumoured heir to the throne – David Letterman – got unceremoniously bumped from the gig in favour of Jay Leno. Letterman, as a result, took his act to CBS, debuting The Late Show with David Letterman a year later, on August 30, 1993.

Today, twenty years later, Dave celebrates a landmark anniversary. To commemorate the occasion, we wanted to post one of Dave’s oddest, most outrageous moments. While there’s been many – from Madonna’s potty mouth to Crispin Glover throwing a kick at the host’s head to stupid pet tricks to Dave confessing on air to an affair that morphed into a blackmail plot – one guest constantly provided fodder for Letterman while truly proving to be a bit of an “oddity” in his own right: Richard Simmons.

The above clip is one of the exercise guru’s most memorable appearances on Dave’s show. Let’s just say that he’s sweating, but it’s not to the oldies.

And as for Dave, here’s to 20 more years of The Late Show with David Letterman!