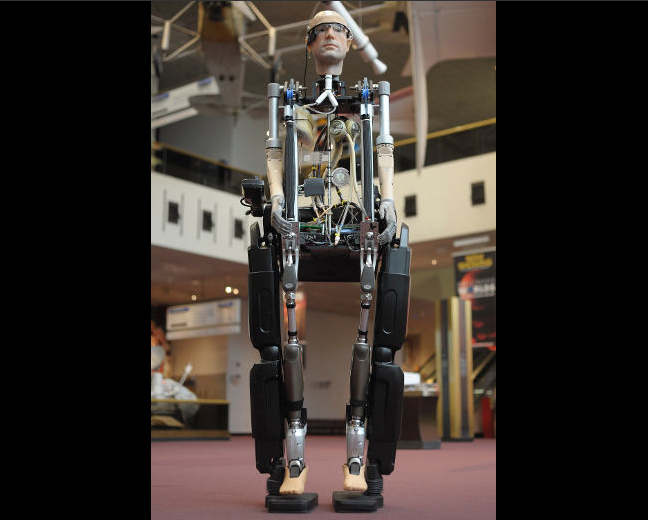 He’s a “One-Million Dollar Man” rather than six, and he doesn’t look much like Lee Majors, but the world’s first real bionic man is on display in Washington D.C.

An assemblage of robotics, a human-like face, and virtually every existing synthetic human body part out there – including “a pancreas, lungs, spleen and circulatory system, with most of the parts early prototypes” – the bionic man made history when he walked into the Smithsonian’s National Air and Space Museum last Thursday, ahead of a Smithsonian Channel documentary about its creation.

Developed by the British-based Shadow Robot Co., the robot cost a million dollars to assemble. It doesn’t show much emotion – after all, it doesn’t have facial muscles – and his frame is a little out of proportion, but he does walk and talk via a computer program and stands as a triumph of science in the fields of artificial organs and bionic body parts.

He’s even got a name – Meyer – after the host of the documentary, called The Incredible Bionic Man, who himself has a synthetic hand. But, while development of artificial limbs and organs is constantly improving, it turns out creating an artificial personality is a much taller task.

“The people who made it decided to program it with the personality of a 13-year-old boy from the Ukraine,” said a Shadow Robot Co. design engineer. “So, he’s not really the most polite of people to have a conversation with.”

You can’t win them all.

Reuters via The Toronto Sun