Henry Heimlich, 96, Uses His Own Maneuver to Save Woman 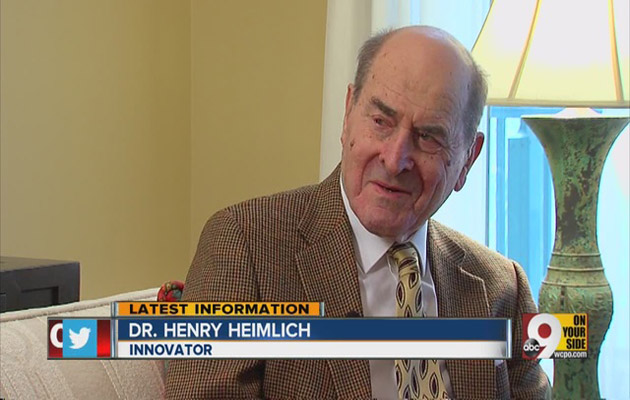 Earlier this week, Dr. Henry Heimlich used his own life-saving maneuver on an elderly woman who was choking on her hamburger.

The event occurred at the Deupree House, a Cincinnati seniors home where both Heimlich and 87-year-old Patty Ris live. Heimlich, who has been living at the home for six years, went to Ris’ side when he saw she was in trouble—and he got there quicker than the centre’s staff.

Since he invented it back in 1974, Heimlich demonstrated his abdominal thrust technique countless times—including an appearance on The Tonight Show with Johnny Carson—however, this marks the first time the retired chest surgeon had attempted the first-aid practice in an actual life or death situation.

According to the local paper, Ris even wrote out a thank-you note that read: “God put me in this seat next to you.”

The significance of the event was not lost on Heimlich. “It made me appreciate how wonderful it has been to be able to save all those lives,” he told the paper.