How NOT to Handle Your Sex Scandal: Lessons from Weiner-gate 2013 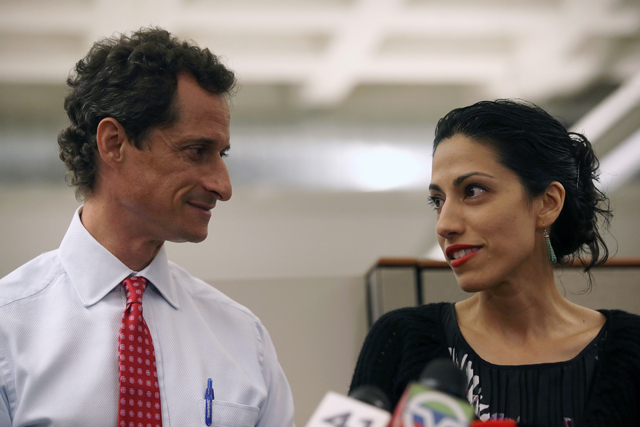 There was a time when the proud Weiner name stood for hard work, integrity, public service and Oscar Meyer products. Now, it’s been reduced to little more than giggle fodder.

The latest blow to former U.S. congressman and current New York City mayoral candidate Anthony Weiner’s reputation came this week, when he admitted to three more online relationships, all of which occurred after an initial scandal got him booted from Congress in 2011. His wife, Huma Abedin, an aide to Hillary Clinton (who’s had her share of dealings with a famous cheating hubby), spoke up at a press conference Tuesday, stating the obvious: “Our marriage, like many others, had its ups and downs.” And that’s just Weiner’s pants.

But seriously, this wasn’t just any old sex scandal. Weiner got his jollies from photographing his genitals and sending the pictures to women online – essentially the cyber-version of the flasher in a long jacket and sunglasses jumping out from behind the bushes for kicks.

Still, despite the nature of the indiscretions being rooted in a deeper part of the human psyche than your average extramarital affair, a politician or celebrity caught up in a sex scandal isn’t anything new. From Tiger Woods to Arnold Schwarzenegger to Eliot Spitzer (who’s running for New York City comptroller), most famous men caught cheating finally ‘fess up, face their shame both publicly and privately and retreat into hiding. People move on, another famous face gets caught being naughty and the cycle continues. Wash, rinse, repeat. If the offender is lucky (and, more importantly, sincere), people will forgive and allow them the chance to step back into the public sphere.

David Letterman offered what’s generally considered the archetype of successful apologies. In 2009, after years of cheating on his partner, Regina, with staffers, the boyfriend of an ex-Late Show producer attempted to use the info to extort money from him. Letterman, instead, confessed everything on the air, admitting his infidelity, apologizing to those he hurt, accepting all of the blame and asking for forgiveness. Four years later, many barely remember it even happened. It was a master class for publicists and PR folks on how to take responsibility and atone for your sins with sincerity, earning the public’s forgiveness in the process.

So where did Weiner, 48, go wrong (we mean, of course, aside from all the adultery)?

Lesson One: It’s All in a Name

First, and he can’t help this, but a cheater by any other name would not be as sweet (at least for headline writers). A politico named Weiner involved in a sex scandal? Come on – it’s like a gift from the tabloid gods.

When the initial sex scandal broke in 2011, he denied having anything to do with a lewd photo showing up on his Twitter feed. It was a hacker, he said – you know, that mischievous Internet goblin blamed whenever a celeb gets caught with a kinky picture or inappropriate comment attached to their social media accounts.

Eventually, after admitting his online adultery, which, at the time, Weiner said involved as many as six different women, he resigned from Congress. He eventually did the media rounds, including telling The New York Times “[Abedin’s] given me another chance. And I am very grateful for that. And I’m trying to make sure I get it right” and People magazine that “I feel like a different person.” Attention shifted to other celebrities and, quicker than you could say Lindsay Lohan, people seemed to forget about Weiner.

Then, earlier this year, he announced plans to run for mayor of New York City (he failed in a similar bid in 2005). People chuckled but gave him a shot. That is, until…

…we learned that since the first sex scandal fiasco, he had at least three more online sexual relationships. Apparently, all the teary eyes and public shaming wasn’t enough to detract Weiner from living up to his name. Any forgiveness he may have earned from the public – gone. This time, he made up a fake name to “disguise” his identity. That name? Carlos Danger (see Lesson One above). Most recently, one of the women involved in the new scandal, Sydney Leathers (another great name), claimed on the TV show Inside Edition that she and Weiner loved each other: doubly shocking, both for her claim and the fact that Inside Edition is still on TV breaking major news stories.

Despite these new revelations, the mayoral candidate refuses to drop out of the race and continues to insist that he’s not a sex addict. Hey, if Rob Ford can hang onto his post and his approval ratings in Toronto after everything he’s been through, maybe Weiner has a chance.

As for his wife – inexplicably, after being cheated on with anywhere between nine and 13 women, Abedin still supports Weiner.

“I do strongly believe that is between us. … We discussed all of this before Anthony decided to run for mayor. … I love him; I have forgiven him; I believe in him … and we are moving forward,” The Hill quoted her.

Perhaps Abedin’s future political ambitions are the motive behind her tendency to forgive. After all, her boss Hilary Clinton forgave Bill, avoided a messy divorce and the airing of dirty laundry in public and went on to become Secretary of State and a legitimate Democratic presidential candidate.

As for “moving forward,” it’s unclear what that entails, but revoking Weiner’s Internet privileges would be a good start.