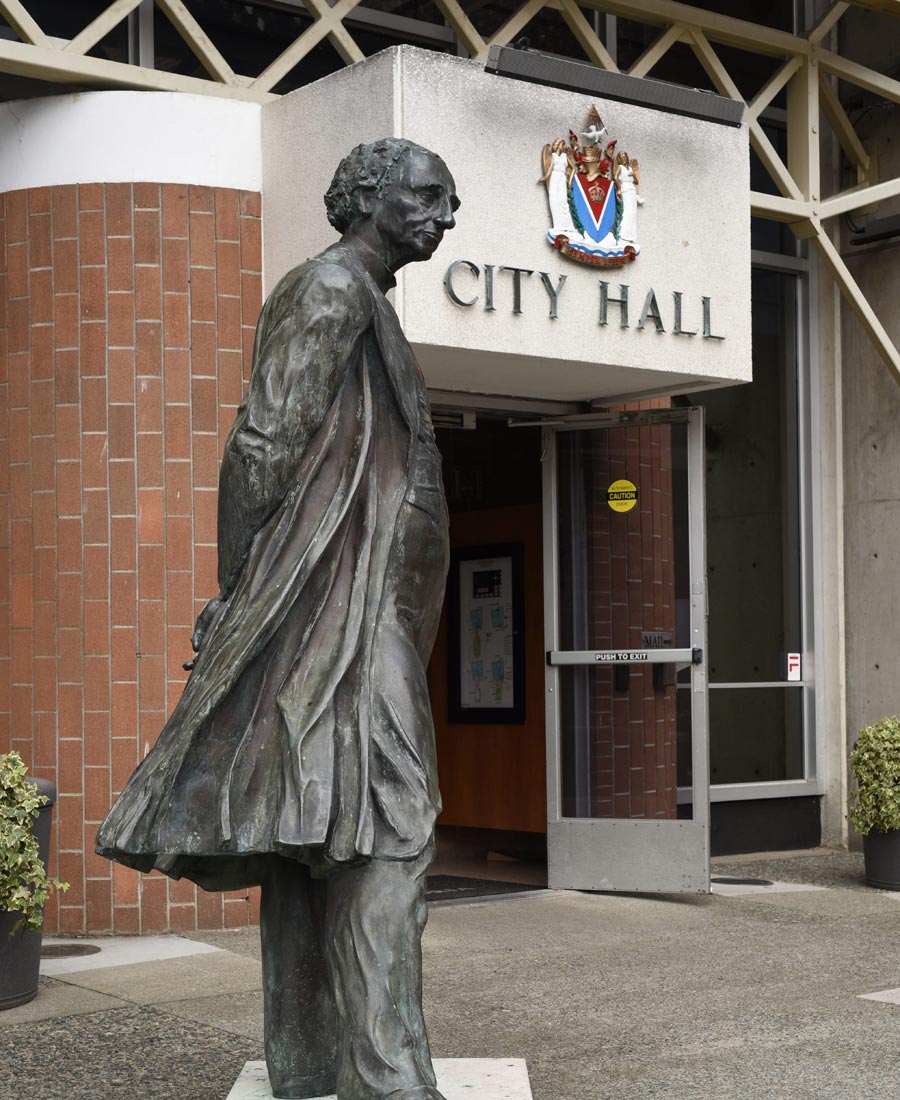 Even in this summer of undeniable strangeness, it was a little weird that  John A. Macdonald was trending on Twitter this week. Even stranger was that somehow, Canadian history was being erased before our very eyes! The internet flurry followed a news release from Victoria, BC Mayor Lisa Helps announcing that the statue of Canada’s first Prime Minister near the main entrance to City Hall will be removed and placed in storage “until an appropriate way to recontextualize Macdonald is determined.”

Following a 7:1 vote by the city’s Committee of the Whole on Thursday afternoon supporting the removal (with final approval expected at tonight’s Council meeting), the statue will be replaced with an information plaque detailing the decision, and focusing on “Macdonald’s complex history as both the first Prime Minister of Canada and a leader of violence against Indigenous Peoples.”

The decision to remove the statue comes as the first concrete action of the City Reconciliation Program, “a formal process of reconciliation with the Songhees and Esquimalt Nations, the Lekwungen speaking peoples on whose homeland the City is founded,” following consultations of the City Family, a group comprised of “City Council members, appointees from the Nations, both Indigenous and non-Indigenous community appointees, and two City staff members.”

The group, formed in 2017, meets monthly in City Hall, and the decision to remove the statue will ensure “family members and other Indigenous people do not need to walk past this painful reminder of colonial violence each time they enter the doors of their municipal government.”

Sir John A. Macdonald is known as one of the strongest voices for Confederation, instrumental in the creation of the national railway, a prerequisite for British Columbia’s inclusion in the new country (he also served as MP for Victoria, although he never actually visited the city, let alone lived in his riding), and in the creation of the Northwest Mounted Police. As a result, he is widely regarded as one of the most significant Prime Ministers in Canadian history.

He was also, however, the man who upheld the execution of Louis Riel, who referred to Indigenous Peoples as “savages” and encouraged the removal of their children, creating the residential school system (the last federal residential school closed in 1996).

The removal of the statue is part of an ongoing re-examination and analysis of history at both national and international levels. In 2017, for example, the Elementary Teachers Federation of Ontario called for the removal of Macdonald’s name from schools in the province, referring to him as “the architect of genocide against Indigenous People,” while earlier this year a statue of Edward Cornwallis was removed from a Halifax park, citing his issuance of the 1749 scalping proclamation, which offered a bounty to anyone killing a Mi’kmaq, on whose traditional territory Halifax had been built. In the United States, protests and violence have accompanied a drive to remove statues commemorating Confederate icons, including General Robert E. Lee.

Response to the removal of the Macdonald statue has been decidedly — and loudly — mixed, both locally and on-line.

In a Committee of the Whole meeting Thursday morning, Councillors Geoff Young and Pam Madoff expressed concerns over the lack of public consultation on the decision, and objected to the announcement’s release prior to council’s approval of the removal, while Councillor Charlayne Thornton-Joe, a member of the City Family, supported the removal, citing Macdonald’s “racist” actions and policies.

While that tweet was met with the expected barrage of slippery-slope concerns about the erasure of history, or urging Indigenous Peoples to “get over it” (this story is a great reminder not to ever, ever read the comments), there were also numerous tweets which understood that the removal of a statue isn’t erasing history, a point which seems almost painfully clear, and stressing empathy for Indigenous Peoples, for whom the residential school system and racism aren’t “history” to begin with.

Perhaps the most powerfully reasoned of the posters in support of the statue’s removal was Matthew A. Sears, an Associate Professor of Classics and Ancient History at the University of New Brunswick who wrote, in a series of tweets, about how monuments, like the Macdonald statue, are “are often the worst culprits in propagating a distorted and ideological version of “history” that does more to erase history than anything else,” suggesting that “far from “eradicating history”, removing “monuments” to Macdonald or Cornwallis (who themselves certainly tried to erase Indigenous histories!) reflects a deeper understanding of and engagement with history than leaving them in place, with no comment, does.”

It seems Victoria City Council is of the same mind.

According to Helps’ initial statement, “the statue will be removed on Aug. 11 and the plaque installed immediately. After an appropriate amount of time has passed (as determined by Elders from the Songhees and Esquimalt Nations) a cleansing, blessing and healing ceremony will be held in the space where the statue formerly stood. In the longer term, as determined by motion of Council in late 2016, a piece of art representative of Lekwungen culture will likely go in this space.”