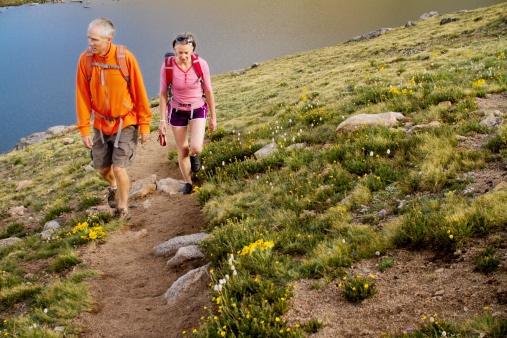 Match your travel personality with one of these four fabulous mini-getaways.

FOR THE OUTDOORSY TYPE

Majestic. Spectacular. Natural wonder. You could apply all of these descriptors, but still you wouldn’t approach the truly awe-inspiring Lake Louise. Just a two-hour drive from Calgary, it sits in one of the world’s most beautiful national parks, Banff, established in 1885. The 119-year-old Fairmont Chateau Lake Louise hotel couldn’t have art-directed a better view.

Nestled near Lake Louise, the hotel is like the icing on Mother Nature’s well-baked cake, with its castle-inspired architecture,
a stone’s throw from the lake itself and a short shuttle ride from some of the top ski runs in North America. “I skied Aspen as a kid,” says one 50-plus buff who travelled all the way from Alabama to hit the slopes, “but these hills are the best.”

Skiing aside, Lake Louise is a four-season destination. Come spring, there’s still fresh powder dotting the hillsides, but as it warms up, hiking, grizzly bear watching and the Columbia Icefield Ice Explorer tours, along with whitewater rafting and canoeing, round out some of the outdoor possibilities. Enlist one of the hotel’s Mountain Heritage Guides to help plan your stay or easily explore on your own. A trail skirting the lake leads to a hidden waterfall, after which there’s the Lake Agnes Teahouse, about 3.5 kilometres from the Chateau, which can be reached on foot or horseback. A couple of kilometres farther, the Plain of Six Glaciers features its own tea house surrounded by the splendour of the peaks. (Both open mid-June.) “Don’t be surprised if you see bighorn sheep or mountain goats on the cliffs,” says Fairmont’s Lori Grant. Tea is also served at the Chateau — don’t miss chef Felix Pfister’s warm scones: frequent guests, such as Alec Baldwin, Michael Douglas and members of the Kennedy clan, rarely do.  —Vivian Vassos

NEXT: FOR THE MULTI-GEN GATHERER

FOR THE MULTI-GEN GATHERER

A Family Affair: A long weekend at the Acqualina Spa & Resort in Sunny Isles Beach, Fla.

Once the haunt of Jackie Gleason and Ava Gardner, Sunny Isles Beach — Florida’s Riviera — is located on a barrier island midway between downtown Miami and Fort Lauderdale. It is home to the Mediterranean-style Acqualina, which is overseen by Canadian hotelier Klaus Tenter, a veteran of the Four Seasons Toronto and The Hazelton, and towers over the Atlantic on the east and the Intracoastal Waterway on the west.

Upon arrival, we’re greeted with champagne and Bellinis; children sip apple juice. Guests are spared the front-desk registration lineup and are checked in within the privacy of their suites.

Our stay just happens to be around American Thanksgiving, and there’s no shortage of grandmothers swimming with tots — all well-behaved, I might add — and dads taking in some sun and a cocktail with, well, their dads. There is also an adults-only pool, but for the most part, the hot spot at the resort is the main pool, flanked by private cabanas on one side and the beachside Costa Grill resto on the other. The cabanas can be booked for a fee and include mineral water on ice, sunscreens of all SPFs and a poolside reflexology foot treatment. Lounges decked out with cherry red cushions line the beach, served with courteous attention from the hotel staff.

For dinner, there’s the Zagat top-rated Il Mulino New York, where the menu suits palates of all ages with classic Italian fare and brilliant presentation. We’re nearly satiated with salty hunks of fresh Parmigiano-Reggiano, carved straight from the wheel at our table, along with a selection of antipastos that would make any Mama envious.

On most floors, there are four guest rooms or suites situated in the four corners of the hotel, two on each side of the hall. Closing the double doors near the end of the hall allows for a pair of cross-hall rooms to be booked for larger families; leave the room doors open with the hallway door locked — and presto! — you have an apartment that can comfortably sleep six, complete with kitchen, living room, daybed/office and private terraces. The marine biology–based AcquaMarine program, nanny services and a “Kid’s Night Out” round out the family-friendly activities.

The resort features ESPA, one of the rare North American outposts of this English leader in spa treatments. Guests can use facilities such as the Crystal Steam Room or the Ice Fountains while indulging
in treatments, and the 45-plus set will enjoy ESPA’s latest trio of facials, which use the company’s new Super Active product line. We’ll have them all.  —VV

NEXT: FOR THE GARDENER

Luxury in a Botanical Garden: A weekend at Hotel Bel-Air in Los Angeles

Your first moment of Zen occurs when you stroll across a graceful bridge and are riveted by the sight of two swans swimming below. This is the entrance to Hotel Bel-Air — and a signal that everything here is out of the ordinary.

There is no doubt where you are: a botanical garden, a secret enclave. But it’s neither the California nor the Los Angeles we’re used to seeing. Nothing about the Bel-Air is.

The hotel is spread throughout the 12-acre garden, which cossets the visitor along its winding trails. Once California chaparral shrubbery, this oasis is now home to plants from around the world, some familiar (Ginkgo biloba) and others seldom seen on such a scale (gigantic fig trees). There are even some signs identifying the most interesting large plants. For instance, there is a sign on the Ginkgo biloba apologizing for the odour; it’s a female tree and carries the fruit, which can have a rotten smell to it.

For the plant lover, what better place to park every stress in the world than in this historic haven, which was a sanctuary for Marilyn Monroe and Grace Kelly decades ago and, more recently, Oprah Winfrey. Elizabeth Taylor (a neighbour) still sends for the famous tortilla soup, and no wonder — the kitchen is justifiably famous. From the killer crème brûlée French toast for breakfast to the Colorado lamb for dinner, the menu is superb.

The herb garden, a secluded formal garden in traditional style, is where they grow herbs such as rosemary for that incredible Colorado lamb. Several times a day, you can see the chef wandering about with his secateurs, and I, for one, did not want to disturb that kind of concentration. They use everything they pick in the kitchen. The garden is also a lovely spot to sit and just take in all the scents.

Eventually, you discover the joys of the swimming pool and a second moment of Zen: eating a plate of lobster salad while gazing across the surrounding canyon hills — you know this is paradise.

But it’s not just the facial in your room or the glorious food that makes for an indulgent weekend. It’s not the fountains that are everywhere or the long walks you take through the gardens trying to identify plants and marvelling at such exotica as Australian tree ferns (Cyathea cooperi) and bird-of-paradise plants mixing it up with yews, elms and sycamores. Nope, it’s the stillness of it all. In an increasingly raucous world, this is a refuge from the brutality of noise. No thumping music disturbs the tranquility. Just plants and peacefulness and an infinitely kind staff. It’s the essence of grown-up civility.  —Marjorie Harris

NEXT: FOR THE EXPLORER

A Dash of Grenada: Three days in the Grenadines

Northwest of Trinidad and Tobago, Grenada is a country made up of three islands, including Carriacou and Petite Martinique, and is touted as the spice of the Caribbean for good reason. More spices are harvested per square mile here than anywhere else.

Considered an aphrodisiac by islanders, nutmeg is the most abundant, with tiny Grenada ranking second only to Indonesia in exports, followed closely by its twin spice, mace. Nutmeg is sprinkled on everything from chicken to rum punch to oildown (Grenada’s national dish, a stew-like concoction of dumplings, breadfruit and other zesty ingredients).

DAY 1 In the mountainous capital of St. George’s on the main island of Grenada, the market is a potpourri of activity and the place to meet locals. Fragrant spice necklaces, nutmeg syrup, cinnamon, tonka beans, cocoa, turmeric, cloves and ginger abound. Organic dark chocolate from the Grenada Chocolate Company is a must-have for chocoholics. Zip across the harbour, which was created by a volcano and considered one of the prettiest in the Caribbean, to The Nutmeg for lunch, a casual spot to relax, or “lime” as the friendly locals call hanging out. Visit authentic plantations to learn about the origins of your favourite spices. On the way to the Dougladston Spice Estate and Gouyave Nutmeg Processing Station, the island’s largest nutmeg-processing facility, you’ll drive by patches of a spinach-like, leafy green vegetable known locally as callalo, pimento trees (the source of allspice) and plenty of banana trees. Wrap up your day of sugar and spice with dinner at the Calabash Hotel & Villas, home of the first Rhodes Restaurant, namesake of the famed chef Gary Rhodes, outside the U.K. Enjoy dishes made with local produce and, of course, spices.

DAY 2 Give your taste buds a break. Spot one of the world’s most critically endangered birds on a Grenada Dove expedition and eco-tour with Anthony Jeremiah. Spend an afternoon with Mandoo Tours to glimpse wild monkeys at Grand Etang National Park, or venture into the tropical rainforest to see the Seven Sisters Falls. Hike through a private plantation of cocoa, nutmeg and banana trees before arriving at the foot of the seven falls, where swimming is permitted. Honeymoon Falls is close by but difficult to find. By now, your body will be begging for a spa treatment at LaSource beach resort. (Bonus: Day passes are offered to cruise passengers.)

DAY 3 Set sail on a 90-minute catamaran cruise to the beautiful sister island of Carriacou, “Land of the Reefs,” and spend the day. Explore the island’s traditional wooden-boat–building culture and the Carriacou Museum, tour the remains of a historic lime factory at Craigston Estate or while away the hours snorkelling at Sandy Island. Squeeze in some smoked lobster at the Green Roof Inn restaurant before returning to St. George’s on the Osprey Express’s 3:30 departure.  — Cherie Delory