Turkey: At The Crossroads 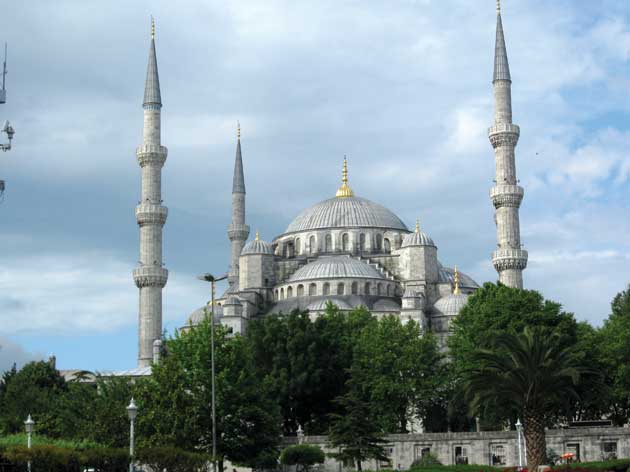 Caught between Europe and the Middle East geographically and politically, Turkey is at a turning point.

It’s 4:21 – a.m. The cry of the muezzin pierces the night’s silence and the waning darkness, as if challenging the sun’s first light in a race to wake the faithful for the brand new day. The mosque’s tower is wired for sound, its speakers with the look of bullhorns, for maximum reach. It’s the first of five daily calls to prayer, this one at the crack of dawn, literally.

This is Turkey, where, in its largest city, Istanbul, you can find 3,000 mosques alone. It is a moderate Islamic nation with somewhat secular European leanings, particularly due to the nation’s birth: Mustafa Kemal Atatürk, born in Thessaloniki in the late 1800s (when this part of Northern Greece was just barely out from under the influence of the Ottoman Empire), put his military school training in Istanbul to use in fighting against the Allies’ post-First World War occupation. He sparked a revolution that began with the taking of Smyrna (now known as Izmir), in an area highly populated by Greeks, located in a portion of what’s now the “Asian” side of Turkey. (Istanbul is considered on the “European” side.) It ended in more violence and the 1922 swapping of Muslims and Ottomans for Greeks, Jews and Christians between the newly formed Republic of Turkey and its European neighbour, Greece.

Unlike its neighbour, however, its current economy is fairly steady (but its eye toward the West has also turned eastward, with a prime minister, who, like his country, is increasingly straddling two ideologies, less Atatürk-secular, more Middle-Eastern conservative). Like its European neighbour, Turkey continues to be very welcoming to tourists. With a multifarious landscape, owing mostly to its geographic whereabouts (Asia Minor has long been a moniker used for the region), the country spans two continents. The upshot is a Mediterranean coastline mixed with a more arid, Middle Eastern topography. And in the middle of all that is an otherworldly place altogether.

Some call it like walking on the moon, a lunar landscape so seemingly out of place it’s as if the mythical oversized builders of the Giant’s Causeway in Ireland used this as their first draft. Others would liken it to the undulating gold-streaked buttes, or “hoodoos,” of the southwestern United States. But it’s the chimney rocks, or “fairy chimneys,” as the locals call them, which sprout from the ground like misshapen fungi that make the region of Cappadocia like nowhere else. The hundreds of tall, slim formations punctuate the landscape in a procession that makes for an alfresco natural history museum. Sure, the Assyrians, the Hittites, the Persians, Alexander the Great and his army, and the Romans, too, all marched through this bridge between West and East, but it is the volcanoes that left their indelible handprint on the land.

In the Göreme valley, now part of the national park that encompasses the whole of Cappadocia, the Hittites took up residence in the first century BC, followed by the Christians. Constantine the Great (the architect of Constantinople) freed the Christians, and the rabbit warren-like terrain provided the perfect place to take refuge from the persecution of the day that continued. An intricate underground network of cities, dwellings and meeting places became somewhat of a Christian stronghold and attracted believers from all over. But alas, all good things must come to an end. When the Byzantines came to power, they weren’t enamoured with the hold that the archbishops held over their flock and in the eighth century, emperors gave the order to destroy all related icons and symbols. No paintings were allowed except those of the cross – a creative decline so devastating the art of painting became lost to the Göreme valley’s inhabitants and, thus was, in essence, the genesis of the iconoclastic period.

Our Turkish guide, Mehmet, is a throwback to Atatürk’s time, a Western-leaning Muslim of a certain age who has an appreciation for secular history. After a tour of troglodyte cave houses where many took refuge, as well as the chapels that still show traces of the symbol of the cross and faded images of saints, he takes great pride in saving the best for last. Carved into the rocks, Tokali Kilise, or the Church of the Buckle, is resplendent with frescoes, a dazzling lapis lazuli that’s near blinding after the dark caves we’ve just experienced. Intense indigo-washed panels depict scenes from the life of Christ, his rise, his fall and his rise again, as well as images of the area’s patron, St. Basil, along with other important biblical figures such as John the Baptist, Elizabeth and, of course, the Virgin Mary.

“We’re constantly looking to add emerging destinations,” says Erin Oddleifson, director, commercial marketing at Transat Tours Canada. The company, known for its broad range of vacation packages at competitive prices (its Air Transat fleet of airplanes is also growing), has recently promoted Turkey to its tour list, rather than just touting it as a mere port of call on one of its Mediterranean cruise itineraries. “Our France-based division already had an established route to Turkey,” she adds, “so we thought we’d open it up to our Canadian customers.” Opening it up with a flavour of the local – meals at restaurants that also act as the owner’s summer home – as well as from the sky, with hot-air balloon rides that give a bird’s eye view of the incredible landscapes down in the valley below.

Back in Istanbul, the bird’s eye view that is the Dome of Hagia Sophia (divine wisdom) is the one only this grand dame of basilicas can boast: in a straight shot across the park, directly in front of her, lies the Sultan Ahmet, or Blue Mosque, with its six minarets; to her right, the centuries-old cisterns that still feed the city, and behind her, Topkapi Palace. What makes the Hagia Sophia so supremely divine is her sheer tenacity. Through what is now perhaps her fifth incarnation (a thousand years older than the Blue Mosque, she’s been an orthodox cathedral, a Roman Catholic church, a cathedral again, an imperial mosque and a now a museum), Sophia’s structure still survives from Emperor Justinian’s time. The original construction took just under six years to complete and, considering it was nearly 1,500 years ago, experts consider it a miraculous amount of time to create this masterpiece of architecture. Rumour had it that Justinian was receiving the building’s plans during the night – whispered to him in his dreams by the archangel Gabriel. Ten thousand-plus were put to work, while mathematicians, physicists and architects calculated Justinian’s heaven-sent plan. A marvel of its day, the dome – a series of curved triangles were devised to help support the massive 32-metre cupola, the fourth largest in the world today – has only had one mishap, when a portion of it collapsed in 558 following an earthquake. It’s held since then, its ingenious porous fabric (said to be stronger than steel) shrinking, expanding and swaying with the earth’s shifts, staving off quake damage and the ravages of religious warfare, fire and plaster casting that covered up (but also preserved) the iconic artworks now revealed beneath.

For now, like the venerable Hagia Sophia, Turkey comfortably straddles the old and new, the West and the East. Miraculous, indeed.

IF YOU GO
Transat Holidays has seasonal packages and cruise itineraries to Turkey starting at $1,619, including return flight on Air Transat, winner of SkyTrax World Airline Awards 2012 best leisure airline.1-866-322-6649; www.transatholidays.com; www.airtransat.ca. On a safety note, check travel.gc.ca/travelling/advisories before you go.