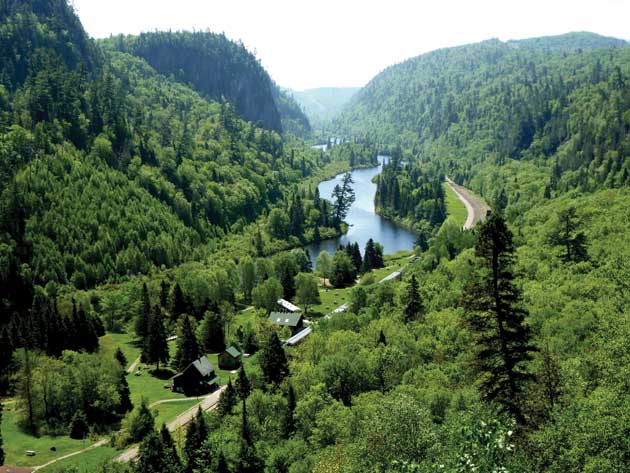 All Aboard! The conductor whistled as the Agawa Canyon Tour Train started to chug north from Sault Ste. Marie for a scenic ride into northern Ontario’s Algoma region. The rush of thrills surprised me, as I’ve experienced some of the world’s greatest trains, including the Orient Express, the Ghan, various European routes  and, in Canada, the Rocky Mountaineer, Via’s cross-Canada Silver and Blue and Ocean to the Maritimes.

Seated beside vast windows in the dining car, watching steel and paper mills whiz by – echoes of the Sault’s industrial past – memories flashed through my mind of my classrooms – as a child and, later, as a teacher – invariably graced by images created by the Group of Seven between 1918 and 1923. Years later, I would admire their original works at the Art Gallery of Ontario, hoping to one day see their source of inspiration: the Canadian Shield in all its rugged beauty, lush forests ablaze in green, red, gold and amber hues, and crystalline lakes so blue you could almost taste their purity.

Now, I was en route, on a 114-mile (183-kilometre) journey, comfortably ensconced in a refurbished train pulled by Electro-Motive F-40 locomotives mounted with an exterior digital camera that transmitted a conductor’s view onto interior video screens that offered a GPS-triggered narration of the scenery in five languages. As we crossed a trestle bridge  and veered toward Lake Superior, the pristine wilderness started to unfold. On board, a video told the history of the region, the French fur traders, and the Ojibwa Indians who inhabited the rivers and lands. At Mile 48 – where Lake Odijaki is restocked with fish – some passengers disembarked with fishing gear in tow, planning to hop on the returning train.

The four-hour ride sped by in scenic splendour as we passed places reminiscent of the painters’ scenes: glassy waters reflecting quaint cottages tucked into lakeside coves; swaths of forests clad by nature in brilliant tapestries of colour, interrupted only by birch trees, their white trunks dazzling in sunshine. At Mile 92 passengers jumped to snap pictures of the train as it curved along the 472.4 metre-long (1,550 feet) Montreal River Trestle, shown above, rising 39.6 metres (130 feet) high above the lake and forests below.

With views of Lake Superior on one side and sheer cliffs of pre-Cambrian mountains on the other, I felt immersed in a virtual scenario of the artists’ canvases. Mile 102 brought a rollercoaster sensation as the train hugged the canyon wall in a steep, 175 metres (575 feet) descent down to the canyon floor, gouged by the Ice Age more than 1.2 billion years ago. Here, the Agawa River sparkled, its wine-coloured hue caused by tannin leaching from the roots of cedar trees.

Passing the Bridal Veil Falls on the right and Black Beaver Falls on the left, we rolled to a stop at Mile 114. Passengers disembarked for the one-and-one-half hour stop with diverse interests in mind. Some took box lunches from the dining car for a picnic by the river. Adventurous types like me endured the 300-step climb up a pine-scented trail to a lookout perch. Along that 40-minute return hike, I heard nothing but the primal sounds of nature – leaves crunching underfoot, the whoosh of ruffed grouse scooting through trees, birds chirping on lofty branches – and reached the top just in time to see a crane spread his wings, dive into the water and emerge with a fish. Awesome.

The return trip reminded me of how train travel harkens to simpler times, when people would cultivate conversations with like-minded strangers. Kicking back, relaxed and chatting with foreign passengers, I learned that most had included the Agawa Canyon Train as an essential part of their tour of Canada. Rolling along, they ranked it worth every minute.

The Agawa Canyon Tour Train runs daily in summer and fall. In winter, it is dubbed the Snow Train and runs once a week. If you plan to disembark at Mile 114 for a hike to the lookout point, wear sturdy shoes and take bug spray.

Where to stay in Sault Ste. Marie