A Place Among the Pines – Golfing in Pinehurst, N.C. 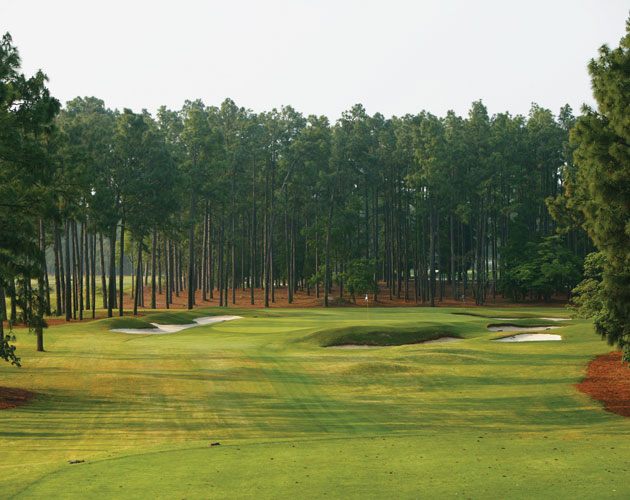 Golfing at Pinehurst gives even a duffer the chance to walk with legends.

I don’t believe in ghosts or the paranormal. Yet, if I close my eyes and concentrate, I may be able to feel the aura and whispers of one of the many spirits of yesteryear and modern times who have spent time at the Carolina Hotel in Pinehurst, N.C. Amelia Earhart, Will Rogers, Bing Crosby, Glenn Miller, Michael Jordan – even crack shot Annie Oakley of Buffalo Bill’s Wild West Show fame – have haunted these halls at one time or another. Opened in 1901, The Carolina’s walls are a gallery of its history: classic photos from the last century to today of people soaking up the southern charm among the pines and sand dunes as well as enjoying the resort’s recreational pursuits, including world-class tennis, swimming, shooting and, of course, golf.

Pinehurst No. 2 was one of the golf courses on my (and many other duffers) bucket list and, just like the Carolina, the course is rich in golf history, a place that allows golfers to walk in the footsteps of many links legends such as Sam Snead, Ben Hogan, Johnny Miller, Jack Nicklaus and Arnold Palmer. The corridor to the pro shop is filled with golf memorabilia displays, pictures, clothing, trophies and tributes to Pinehurst’s golfing history and winners of past tourneys. A “walk of fame area” overlooking the 18th green is akin to a sporting sculpture garden, with statues commemorating Richard Tufts (an original developer of Pinehurst), Donald Ross (the course designer) and a fist pumping Payne Stewart (with right foot high off the ground) after he had made his dramatic 15-foot putt for par for a one stroke win over Phil Mickelson at the 1999 U.S. Open. Excitement is building once again, as Pinehurst will host both the 2014 Men’s and Women’s U.S. Opens in back to back weeks in June. This is the first time one resort will host both these events in the same year.

There are actually eight golf courses to choose from at the Pinehurst Resort, making it the largest golf resort in the United States. Donald Ross, the architect of more than 400 courses between 1900 and 1948 and considered one of the most influential golf course visionaries in North America, designed No. 2 and it opened in 1907. Ross continued to tinker with its design throughout his life until his death in 1948, using its available natural features, such as his trademark grass-faced bunkering and the curving “turtleback” greens as a part of his plan.

In the years after Ross’s death, No. 2 underwent changes, and large areas of thick Bermuda grass rough were added where formally natural sandy areas with natural vegetation had been. But the purists prevailed and in February of 2010, No. 2 underwent a major restoration whereby almost all the Bermuda rough on the course was removed in favour of longer playing areas and larger tracts of sand hardpan and natural wiregrass. This move returned the course to its more “natural state,” as Ross had intended. What’s old is new again.

Pace of play is not something you worry about at No. 2. I spent my whole round trying to make the experience last, soaking up the history and the pure thrill of playing where the legends of golf have played. I highly recommend that you golf with one of the club’s caddies, as they have a great deal of experience navigating the famously “diabolical greens.”

Charlie, my caddie, is a grizzled 60-something local with a keen southern drawl, sharp wit and excellent knowledge of the course, added immeasurably to the overall experience. He soon coached me that, whenever possible, it is wise to keep the ball on the ground to avoid chip or flop shots from simply rolling off the undulating “turtleback” greens. He was also quick to point out historical features, such as Annie Oakley’s summer cottage located just off the course and the fact that the original greens were made of sand. And, try as he might to soften the blow of my wayward shots (Charlie had a way of making my many gaffes sound interesting – “That one was a real slippery eel”), it didn’t save me from what was a truly humbling golf experience.

Simply put, it’s a very challenging test for an average golfer. But it was humbling in another way that will stay with me: a day of being surrounded by whispering pines and cool breezes, walking in the footsteps of the legends of the game. 1-855-235-8507; www.pinehurst.com

If walking with locals is more your golf scene, book a round at Pine Needles, about five miles from Pinehurst Resort in Southern Pines. It’s another Donald Ross-designed gem
originally built in 1928 that hosted the U.S. Women’s Open in 1996, 2001 and 2007. The course is owned by Peggy Kirk Bell and her family and, with her knack for passing on her skills, she has been acknowledged as one of America’s 50 best teachers by Golf Digest.

Locals treasure Pine Needles for its scenic holes carved among towering pines, varying elevations and Ross design traits of keeping the immediate natural environment and natural obstacles intact. The par 3 third hole, for example, is the course’s signature with a picture-postcard pond and green over wetlands with a sharp slope from back to front. 1-877-502-3552; www.pineneedles-midpines.com