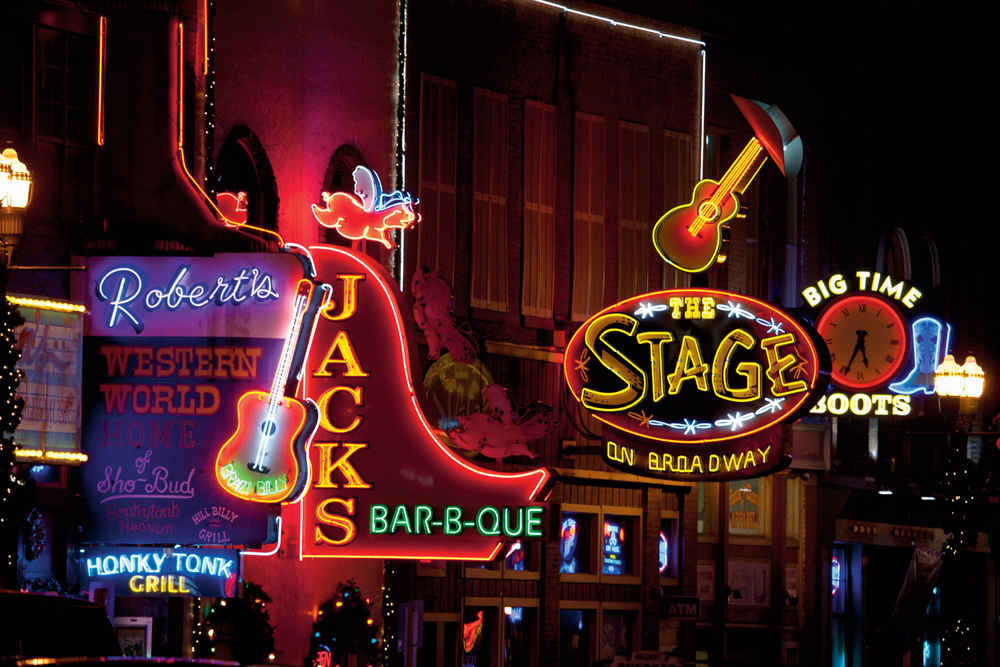 When two of my close friends and I decided to visit Nashville last fall, it wasn’t because the city was named one of the best places to visit in 2014 by Travel + Leisure, although it added justification.

Nor was it entirely because of our passion for country music – although that certainly played a major role. Admittedly, our desire to spend a few days in Music City had been spurred by the TV series, Nashville, created by Callie Khouri (of Thelma & Louise fame) and, in particular, by the show’s dark and brooding (he’s a musician, after all) male lead, Deacon Clayborne, played with gravely masculine finesse by actor Charles Esten.

Call it wishful thinking, but we hoped Nashville would prove a beacon for Deacon types – that all-American male who drives a truck, plays guitar and croons in a tight T-shirt and tighter jeans (I’m looking at you, Brad Paisley and Tim McGraw). If nothing else, it provided a rom-com narrative to our trip: find ourselves a singing cowboy in a city known as the home of heartbreak songs.

We touch down on a Saturday and check into the newly renovated Sheraton Nashville Downtown, a slick hotel that hints at the town’s renewed status as a symbol of cool. It’s only a 10-minute walk to Nashville’s main tourist thoroughfare, Lower Broadway, a loud and boisterous street lined with honky-tonks that play live music from 11 a.m.

The standout among them has to be the famous Tootsie’s Orchid Lounge, a two-storey dive with its exterior painted a garish lavender and upon whose stage stars ranging from Willie Nelson to Kris Kristofferson have performed. It has also been a location for films like Coal Miner’s Daughter. We slip in past grizzled doormen who look like they’ve heard it all before. It’s a narrow space with the stage smack up against the front window. A band is playing a rousing tune and, while we don’t recognize the musicians or the song, the bar is packed tight.

We squeeze past the crowd and up the steps to the second floor where a trio of young artists are taking requests. It’s musicians like this – impossibly young, completely unknown and extremely talented – that give Nashville its reputation as the place to make it or break it in country music. Walk into any bar and listen to struggling musicians who are playing for tips, and you might be able to say you were there when the next Miranda Lambert or Zac Brown was discovered. Stuffed between the honky-tonks and bars are shops and boutiques designed to tempt you to dress like a “local” in cowboy boots and hats (and yes, we went native).

Once we had our fill of Broadway, we stroll west toward The Gulch, an über-trendy ‘hood where Taylor Swift used to live before eschewing country music for Manhattan pop. For fans of the show, the main focal point is Two Old Hippies, an eclectic boutique carrying an array of local designers. We linger in part because of the clothing (we each spend a chunk of change) and, in part, because of the very friendly and adorable male staffer. He had us at “y’all.” He fills us in on the series, which has filmed in the store, and how it’s not unusual to spot cast members out and about town or even come upon a shoot in progress. So, there is a chance … Across the street is the Station Inn, the famous bluegrass bar. It hadn’t opened yet, but my eyes catch a poster for an upcoming show. I recognize the face – it’s Charles Esten! We could see the man in the flesh – until we note the date. Exactly one week after we depart. Close but no guitar.

Never ones to be discouraged, we set our sights on the evening’s plan – the Grand Ole Opry, which in 2015 celebrated 90 years since its first radio broadcast, a tradition that continues to this day with shows broadcast live three nights a week. The Opry has launched and relaunched countless careers and, the night we attended, we were honoured to witness one of the last performances of Little Jimmy Dickens before he passed away.

The four-foot-11 country dynamo known for his rhinestone outfits (he is credited for starting the trend) was 94 and as energetic as ever. The show was a blast and included a dozen acts that ran the gamut from lesser-known bands such as The Henningsens to today’s biggest stars like Kellie Pickler and country legend Mel Tillis.

The audience is as age-diverse, with fans from eight to 80 seated side by side, some with hats but all with enthusiasm for being part of country music’s historic radio program for a night. But be warned: the theatre is in Opryland, a solid half-hour drive from downtown and a veritable amusement park and mega-mall to boot but worth it. Turns out we had missed another Nashville cast member, Jonathan Jackson who plays Avery Barkley – the bad boy with a heart of gold – the week prior. We are starting to see a pattern emerge …

Sunday rolls around, and we find ourselves heading toward Broadway again. This time it wasn’t honky-tonks we were after but a peek inside the Ryman Auditorium. Known as the “mother church of country music,” it started out as the Union Gospel Tabernacle, renamed the Ryman after the man who built it passed away in 1904. The stage is hallowed ground with many international luminaries of stage and screen treading its boards over the years, including Charlie Chaplin, Katherine Hepburn, Harry Houdini, Helen Hayes, Mae West and, of course, country legends like Hank Williams, Johnny Cash and Patsy Cline, to name but three.

The acoustics are second to none, and the wooden church pews and stained glass windows evoke the building’s earlier spiritual connection. We peruse the glass display cases that line the upper portion of the balcony. Inside are costumes and instruments and other memorabilia of the performers who have graced its stage. As we do, far below, stagehands set up for a performance, a further testament to Nashville’s ease at co-existing with its past and present and its dual role as tourist destination and hard-core functioning music town.

That night, we have reason to be excited – our destination is the Bluebird Café, made famous in the series for both its songwriter nights, which take place each Sunday, and as the spiritual home for the series’ star-crossed lovers, Deacon and Rayna James played by Connie Britton. Fans line up for two-plus hours to get into the 100-seat venue.

My friends and I were given passes and ended up in the artists’ line where the musicians take us for one of them. I am quick to break it to the gorgeous six-foot-six cowboy standing behind me, complete with guitar case in hand, that I’m media. “That’s alright, ma’am,” he tells me in what I would soon discover is an Alabama drawl. “We like press.”

And I like musicians but I digress. While at the Bluebird, you get to listen to the next big “thang” – musicians audition to play – with performers bearing names like Colby James and BoDean Adams (who came with his mom). We are also treated to a set by Songwriters Hall of Fame inductee Don Schlitz, who penned Kenny Rogers’s iconic hit “The Gambler.” After the show, musicians mingle with guests. It’s all very homey and intimate.

While on Nashville, the Bluebird appears to be a downtown hot spot, it’s actually in a strip mall in Green Hills – like the Opry, a lengthy cab ride from downtown. The series has filmed here, but the production built a set where most of the scenes are shot. The staff informs us that cast members often come and hang out and even play, just not tonight.

In the morning, we want snacks for the flight home and stop in at The Turnip Truck, a healthy grocery store. As I check out, I overhear one of the cashiers mention she’d seen Charles Esten. My ears perk up. “Where?” I ask. She smiles and points.

My heart in my throat I turn and see … the latest edition of Nashville magazine with Deacon and his sexy smile gracing its cover. Dammit. What can I say? I bought it.