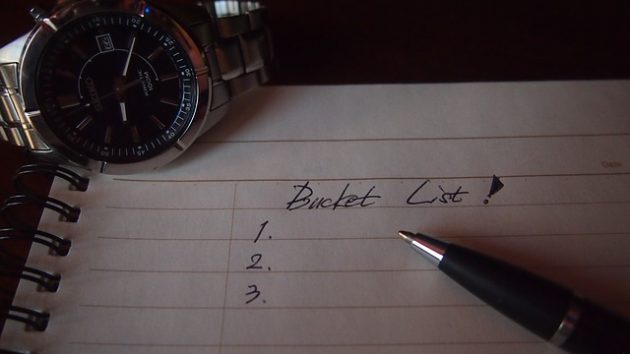 It’s no longer enough to say “you only live once” or “live everyday as if it’s your last.” The bucket list has essentially transformed death into an approaching deadline.  While Zoomer‘s own Libby Znaimer has a list, she’s learned to slow down and enjoy its completion.

I have to renew my passport for a trip at the top of my bucket list. I didn’t think twice about ticking the 10-year renewal option. Instead, I took time to think about whether I have enough time to mail in the application or whether I should spend the extra money to expedite the process.

It was awhile before I even realized I had barely noticed something that would have set off an inner conversation about my mortality not so very long ago. Never mind the decade-long passport, I remember chiding myself for a two-year renewal of my car’s registration. And getting a new credit card with a five-year expiry date used to set off waves of anxiety.

Readers of this column know all about my experience with pancreatic cancer – from a devastating diagnosis right at the time Zoomer was launching to a miraculous recovery that changed my life. It wasn’t my sense of passing time that sparked this trip to India, though I have wanted to go for a very long time.

“Let’s just go,” said my husband, Doug, when we discussed it for the umpteenth time. He had just received bad news about an old friend’s health and some deaths in his wider circle of acquaintances. “You never know how long you have left,” he said.

It was surprising to hear it from him, though he is a bit older than me. Doug would be voted Most Likely to Live to 100-Plus. He’s in better shape than people decades younger, regularly boasting of beating friends’ children and even grandchildren at squash. In all the years we have been together, I don’t recall him suffering anything worse than a rare man-cold. And he has the right genes – both his mother and grandmother lived well into their 90s.

The idea of maintaining a bucket list became popular after the 2007 movie of the same name. Screenwriter Justin Zackham used the phrase, derived from the old saying “kick the bucket,” to describe the adventures of two terminal cancer patients who left the hospital to embark on a road trip that fulfilled their final wishes. In the process, they come to understand deep truths about themselves and to appreciate what was most meaningful in their lives.

The idea of a bucket list has really taken hold – and as in the film – it usually seems to be used in relation to travel and, more recently, food. Maybe that’s a good way to ease into the more profound questions that come up when we realize our time is finite. But it also trivializes them.

I love experiencing different cultures but I don’t love being a tourist. This time, it wasn’t hard for Doug to convince me to go. “It’s not like the old days when you had to take a huge amount of time because the destination is so far,” he told me. “We could just go for a couple of weeks.” By the time it became clear that we could not do this in a fortnight, I had already made the commitment – and I am happy I did.

But for me, it’s the opposite of a bucket list. I’m comfortable taking the longer trip for the same reason I’m getting a 10-year renewal on my passport – I’m no longer worried that I may not have much time.

It’s not that I’m taking my health for granted – but I’m not fretting about the important things I want to accomplish. I’m letting things unfold in real time. I even waste time without getting too down on myself. That is not necessarily a good thing, though it feels luxurious.

Being aware of my mortality has inspired me to do some of the best things I have ever done – binge-watching the latest series does not!

It’s ironic that Doug is confronting his mortality just as I am letting go of worries about mine. I will have to pay more attention to his timetable for our life together. But I’m not scrambling to get through any kind of list – although, if you’re talking about “100 Foods to Try Before You Die,” I’m in!