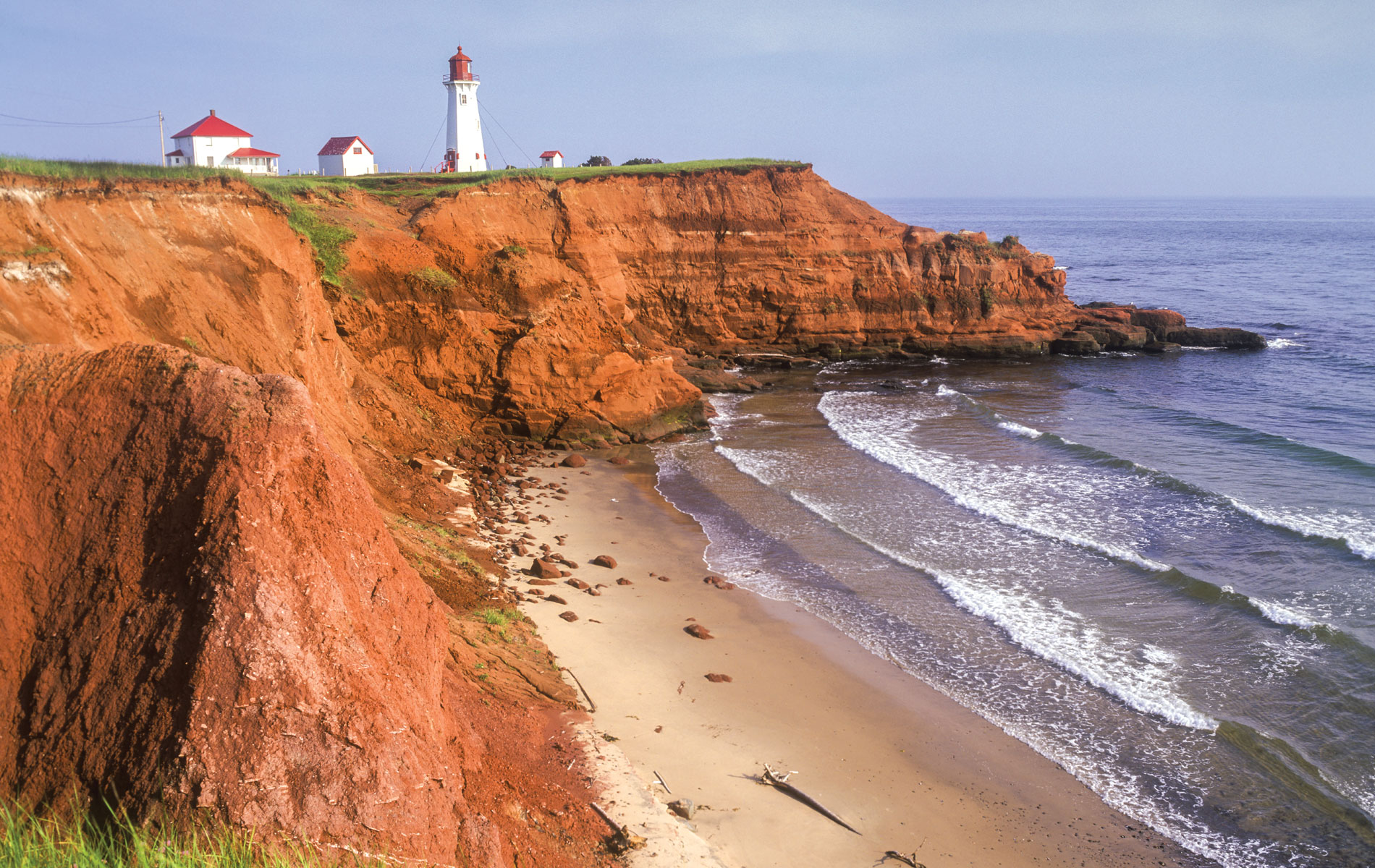 In the middle of nowhere, Jim Byers discovers that Quebec’s island idyll is somewhere he wants to be.

My plane is skimming over a bay of slate green water, with a perfect red and white lighthouse perched on a craggy coastline. I haven’t even arrived at Îles-de-la-Madeleine, the small set of islands in the Gulf of St. Lawrence known locally as the Maggies, but I’m already entranced.

And surprised. I’m not taken aback by a lighthouse. But the water looks positively tropical. And I wasn’t expecting steep, crumbling red cliffs.

It’s a pattern that would continue over the next four days. Every time I turn around, I find myself taken aback by big and little things in this magical setting. The houses are glorious colours you might find in the super-deluxe box from Crayola; deep purples and brilliant aquamarines and sunny yellows.

The hotels, mostly small family-run places, are personal and delightful. One B&B is fashioned out of an old schoolhouse and feels like a designer French-Caribbean boutique hotel. And the people are gloriously friendly and helpful to an Anglo-speaker from the Big Smoke.

My first drive is an hour-long meander that takes me from the tiny airport to the tip of Grande Entrée. The islands are a long, skinny archipelago strung together in a bit of a C shape. You might not see a building for 10 or even 15 minutes at a time – just dunes and endless green spikes of grass and blue sky and white cloud. I pass a few cyclists and a couple windsurfers plying the islands’ omnipresent breezes.

I pass some small homes near a beautiful beach on Pointe de l’Est that goes on for miles with nary a soul to be seen. There’s a beat-up, weathered boat called Purple Rain parked in front of a beat-up weathered beach shack. For some reason, there’s a Confederate flag flying from the boat. My tour guide the next morning, the delightful Guillaume Frappier-Richard, tells me he has no idea what it’s about. I could perhaps find out but I like the idea of it being a mystery so I let it go.

I have a lovely dinner at Auberge la Salicorne, a surprising fish soup with coconut milk and barbecued shrimp served just spicy enough to be interesting. The next morning as I get up for breakfast, I hear a woman’s voice carrying a soft, bewitching melody from the kitchen as I sip my coffee.

A few minutes later, I’m down near the end of the island. Soft wind and gentle waves are lapping against the red rock coastline, while black and yellow butterflies flutter over waves of deep green grass. A stunning, brilliant orange home sits on a small hill overlooking the bay. Someone has taken a lawn mower and cut the grass into the form of a deep green heart.

If I’m not already in love with this place, I am now.

I take a morning hike with Frappier-Richard, who explains how the colourful houses were formerly used as reference points for fishermen to find their way home in the fog but are now an important part of the islands’ heritage, fussed over and painted and repainted again and again.

We walk along lonely beaches and stop to taste local herbs that grow wild on the rocky soil of these isolated islands. We pass rocks and shells with small holes drilled by tiny sea creatures. Frappier-Richard finds magic and wonder in everything he sees: the rocks, the stunted trees, the ocean waves. His enthusiasm is contagious.

At the nearby lobster docks, fishermen bring in their catch. Deep orange-brown lobsters with bands around their claws are being dropped into plastic bins. A group of women is sitting on a bench, talking and laughing and smoking and chatting in a fast-paced mixture of English and French as the men take care of the catch. The men bring up their bins and the ladies take turns loading them into trucks. These are hard-working women who do more than their share of the dirty jobs. I watch the fishermen for a while longer.

One woman looks at me and laughs, “They’re just showing off.”

I’m clicking away on my camera when I hear one of the fishermen call out. I peek around the corner to see him holding a massive lobster, which he insists I pose with.

Maybe he knew I was “from away.” Maybe it’s just their nature. But I find myself, not for the last time, deeply appreciative of these island people and their “think-nothing-of-it” hospitality.

The Îles-de-la-Madeleine themselves appear almost fragile, barely poking above the surface of the surrounding sea. The people are anything but. They live in a tiny part of a vast province, on a tiny set of islands in a vast body of cold water. When the seas are rough, shipping and lobster fishing and other necessities of life can be tricky. When the fog rolls in, flights from the mainland are nothing more than a rumour.

“We’re here by choice, most of us,” says Danielle Houde from the local tourism board. “The islands are hard to find, it’s expensive and we’re often away from our families. So people here really love it.”

There’s a wonderful sense of co-operation, I think, when people live on islands. At Fromagerie du Pied-de-Vent (“feet of the wind”), they use local beer from À l’abri de la Tempête (“shelter from the storm”) to brush some of their cheese wheels. At the brewery, they take the spent grains from the beer-making process and ship it to farmers, where they’re fed to local livestock. At a shop and cooking school called Gourmande de Nature, Sandra Lopez tells me they had leftover cranberries one time so they shipped them to the brewery for a special batch of cranberry beer.

On the southerly island of Havre-Aubert, I duck into Café de la Grave for good chowder in a deep bread bowl. The owners have taken old wooden chairs in beat-up shades of blue, red and yellow and jammed them into an old-timey place with old books and knick-knacks. It’s utterly charming, and I’m told locals sometimes come in and play the piano and guitars at night in impromptu jams.

I wander into the Musée de la Mer and read the story of a man named Auguste Le Bourdais, the only survivor of a famous shipwreck in local waters in 1871. He had parts of his legs amputated twice but still managed the local telegraph office. I also read a great story about how folks were fed up with the lack of proper telegraph service after the cable broke back in 1910. They bunched their mail into a wooden barrel and attached a small sail and rudder to it. It ultimately landed on the shores of Cape Breton and caused a big stir, forcing an embarrassed government to install a proper telegraph system.

But remote doesn’t mean that the modern comforts are missing. I rest my head in several very fashionable B&Bs during my stay. At La Butte Ronde, they’ve taken an old schoolhouse and turned the main room into a veritable greenhouse with gorgeous furnishings and a brilliantly polished piano.

On Île du Havre Aubert, I admire the stylish local art on the walls and take in a lovely seafood meal at Auberge Havre-sur-Mer. I fit in a long walk along a deserted beach just outside its back door and later steam away my woes in the indoor hot tub.

The beach at Cap Alright is a drive past green fields with waving grass and colourful homes. Suddenly, I’m confronted with a small, faded
red and white lighthouse on a towering cliff of red stone. I stand in the deep grass near the lighthouse and watch bright blue and white and orange lobster boats sailing back home with their catch.

I find a lonely beach. The sun is out, and the famous winds are hiding. I take a small, grey stone worn flat by centuries of waves and send it skipping across the glassy surface, sliding toward a massive outcropping of red rock under a soft blue sky.

I’ve been to a lot of places that burn up my camera’s memory cards. These islands and these people left an imprint on my soul.

– Arriving Air Canada Express flies from Montreal, Quebec City and Gaspé. You can also take a five-hour ferry ride from Souris, P.E.I. CTMA Cruises (www. croisieresctma.ca/en/) offers a one-week cruise from Montreal, with food from the islands and entertainment along the way.

A version of this article appeared in the summer 2015 issue of Zoomer Magazine.