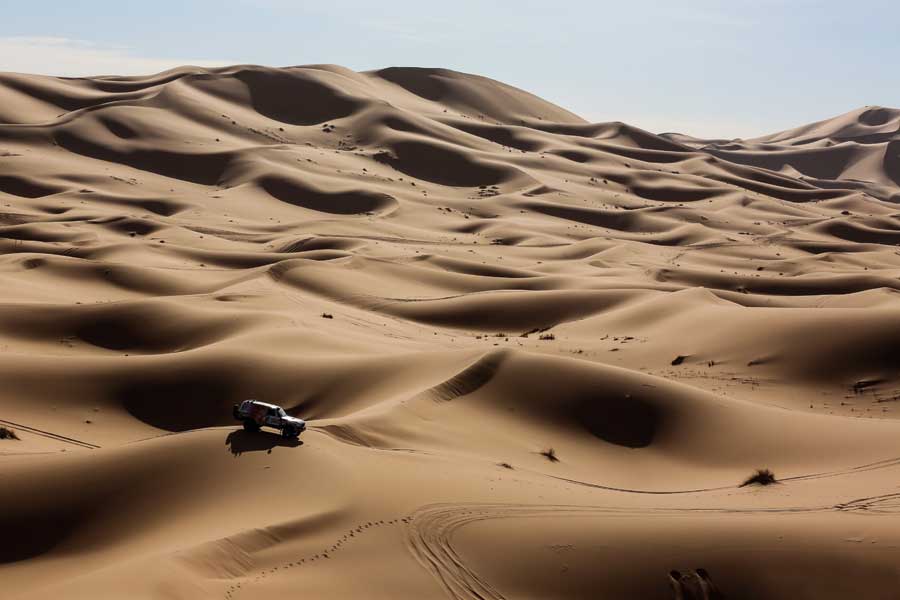 After taking on the threat of cancer full throttle, two sisters switch gears and test-drive a different kind of bond.

Who: Lorraine Sommerfeld (me) and my sister, Gillian Lemos
What: Rallye Aicha des Gazelles, a one-of-a-kind women-only off-road rally
Where: The Sahara Desert, Morocco
When: 7 days in March
Why: Ah. That is where things get interesting …

I write about cars for a national newspaper and about my kids for the local one. The Gazelles Rally is a dream assignment. The cost can hit 40K euros per team; when the offer came, I had a once-in-a-lifetime opportunity.

I also knew who to take.

Growing up, I described my sister, Gillian, as being two and a half years younger, as if stressing the half year could put more space between us. She jokes I now pretend there’s no gap at all. After the death of our parents, Gilly and I and Roz, our older sister, pulled together tighter, knowing love and shared history could help us weather whatever would next be flung at us.

Our mom died of breast cancer in 2000. I’ll never forget the angry scars that tore up her chest, from a time when surgeons did little to mitigate the impact of such a disease on a woman’s body or emotions. I started getting mammograms when I’d barely finished nursing my youngest son.

When news of another diagnosis of an estranged sister finally reached us, everything accelerated. A high-risk program added annual MRIs, but the recalculated odds were not good: I started researching prophylactic double mastectomy and reconstruction, the same surgery Angelina Jolie would famously write about a few months later. I was my usual headstrong self going in, having the first surgery just after my 50th birthday. The pathology report after surgery came back indicating carcinoma in situ in my left breast and mutating cells in the right. I was stunned. Sometimes referred to as Stage 0 (I wouldn’t require further treatment), my surgeon just said, “Great timing.” Given our family history, we had no doubt cancer was setting up shop. Gilly followed suit six months later, telling my surgeons, “I’ll have what she’s having.”

Gilly is married with two kids and works for a bank; I have two grown sons and write about cars. We’d always looked alike, but the similarities ended there. Now, we talked about things nobody else understood, like drains and pain, and do these implants look lopsided to you? We debated sizes as we shopped for new boobs; if there could be an upside to any of this, we were going to find it. We celebrated never having to wear a bra again (the implants took care of that) and got 3-D nipple tattoos. We pretended we were warriors, but fear drove us.

A friend who has done the rally was succinct: take someone you won’t kill. I have decent off-roading experience, but this rally is about navigation. You’re given longitude and latitude co-ordinates for your first checkpoint each morning. Find it and get your remaining co-ordinates.

It’s a distance rally; those teams that manage the shortest distance between two points and maintain that over seven days, win. You can navigate through terrifying mountain ranges or around them. Every step from that straight vector on paper increases the likelihood you will get lost.

Participants take navigational training, plotting on paper maps of the region with symbols of what the terrain will comprise but that do little to prepare you for the reality: overwhelming openness and treachery. Giant jagged fields of volcanic rocks; towering sand dunes gleam in the desert sun as if lit from within; rock-strewn dried-out river beds; innocuous looking fields covered in prickle bushes that will flatten a tire: this is the Moroccan desert.
Rules for the rally are stringent. The organization knows everyone’s location through GPS monitoring. Participants – Gazelles – are easy to spot in their identical vests, which must be worn at all times, as must helmets. You can only receive help from other Gazelles. During the day (4 a.m. start), we would go hours without seeing another team.

The rally is famous for bringing out the best and worst in competitors. Energy is high going in, teams made up of lifelong friends, co-workers, sisters, cousins, even a mother and daughter. Some are complete strangers, put together in the expert class – the hard-core ralliers. We were not hard-core. For two months before the event, we tasked my trainer, Mike Castellano, with pushing us into better shape (you change your own 90-kilogram tires), while my mechanic, Chris Muir, made sure I could handle mechanical issues, practising in my driveway. We were still way more excited about getting matching pink shoes.

Two huge gear bags and 36 hours—and four flights—got us to Ouarzazate, Morocco. I only wanted to flop into bed before heading to meet the other 164 teams in Erfoud, but Gilly said she would tell me when I could sleep. Pushing off jet lag would be critical. She would spend the next two weeks making decisions like this, her workload extending far beyond the compasses and maps she was in charge of. The warning to take someone I wouldn’t kill? This is why. One driving error could send us crashing, but the navigator bears the brunt of keeping us on course, as well as the care and feeding of a temperamental driver.

The rally bases from a bivouac, a portable town that reminded me of a MASH set. Dining tent, medical tent, bar tent, press tent, showers – relocated as the rally pushed through the desert. The goal is to find your checkpoints (usually six to eight) and make it to the bivouac before dark. The sun fades around 5:30, then plunges the desert into blackness an hour later. Driving through the desert is threatening in the day, but we discovered a whole new desperation when facing it in the dark. Teams camp out alone when stranded.

Neither of us likes to cop to aging, but when my navigator announced her optometrist said without her glasses she was legally blind, I gave her a little side eye. When we were stuck camping in the desert one night, I offered to heat up our meal rations with a menopausal hot flash, which seemed more reliable than the little camp stove we had.

The day before the race is prologue, a test run to find three checkpoints. It seemed a little easy. Sure enough, on the official Day 1, we nabbed our first checkpoint almost immediately and headed off to number two. We should have enjoyed that second one more; it was the last for the day. Instead, we spend hours lost, massive sand dunes the only thing we could identify on our maps.

The driving is intense, the sleep fleeting. We underestimated the food game, consuming too few calories for the exertion. You’re out of the truck constantly, especially the navigator. Dunes required Gilly to be climbing giant walls of sand looking for safe lines for me, then hustling to catch up as I rocketed through. Or got stuck. You get stuck a lot. You dig like crazy in desert heat, hoping another team doesn’t land on you.

Day 2 was our epic adventure. Checkpoint after checkpoint told us we were charting correctly and driving well. We nailed seven checkpoints by mid-afternoon. Careful to keep an eye on the fading sun, we looked at the time and gambled a run for the final checkpoint.

I’d lowered the tires for sand dunes—I was riding at about 0.8 bar (11.6 psi). Once clear, I went to air back up—and was faced with a destroyed nozzle. I’d checked the compressor on our truck (the Toyota Land Cruiser we were using was a special rental) but not the fitting. Flattened tires and an endless sea of volcanic rock. We could only creep along, terrified that blown tires would isolate us further. Lost and perched on the edge of a jagged canyon, we made it down as darkness fell. By now totally lost in the pitch black, with hours since we’d seen another team, I hit the button for help.

We found out later we’d been running in third place. We couldn’t have done that over seven days but, on that day, for those hours, Gilly could have circumnavigated the globe, and I could have driven through anything.

Calling for help cost us our ranking, meaning we were now competing but not for points. If I ran the rally again, I would have waited it out, but experience matters in this game. We saw teams in tears and teams not speaking to each other. This event draws women who are strong, smart and used to being right. The desert will show you instantly who’s in charge, and I’ve never been so humbled in my life.

We shared a tiny tent, my little sister and I. She kept it tidy and organized her hopelessly disorganized sister. One night in frustration, I tossed things around. She asked what I was looking for. The periwinkle, I replied. She handed me the witch hazel, knowing exactly what I meant. I didn’t know how she knew that, only knowing this is what we are to each other.

On day 3 we managed to find our momentum again, reeling in five checkpoints before our transmission got stuck in low, and we limped for base camp.

The next day, we roamed for a few hours, beyond frustrated, the desert heat relentless on our black truck. As the sun started to descend, I abruptly pulled over. I grabbed the map. We’re going in the wrong direction, I told her. The sun is setting, so that’s west, right? I no longer trusted my own gut, even about something that should have been a categorical truth.

Gilly blinked into the setting sun, her internal compass refusing to mesh with what we were seeing. I begged her to give me 13 kilometres to get us unlost. She shrugged the shrug of someone who doesn’t see the point but doesn’t have the energy to argue. I drove. We found our way out. We were both quiet for a few minutes until she spoke. You’re a better navigator than I am, she said quietly. I looked at this woman who I have gone through a lifetime with. Of squabbling, of matching dresses, of shared loss, of Christmas dinners and cottage weekends, of facing towering fear and knocking it down. We’d tackled the threat of cancer together, no way was a game going to push us apart.
Our happiness at finding our bearings was short-lived, as another miscalculation sends us off track. A local on a motorcycle offered to lead us to our checkpoint, but he spoke no English, and the only sign language we understood was he wanted money for the information. He left us in darkness, and we set up our tiny tent to ride out the night alone.

On Day 5, we celebrated our Mom’s birthday, missing her but knowing her loss 18 years before had given us the head’s up we needed to prevent her grandchildren from losing their mothers to this heinous disease. We got lost that day, of course, but the next day we successfully made it into – and out of – high dunes. Day 7 brought the rally, for us, to a quiet, contemplative close. We were exhausted but we’d done it. It also mirrored what we’d been through: tested beyond measure against something far bigger. Doing it with Gilly just reinforced we would always have each other’s backs.

We’d been warriors all along, and now we’re Gazelles.