As Emperor Akihito, 85, Abdicates, We Look Back at a Dispatch from Tokyo That Asked if the Sun is Setting on Japan’s Monarchy 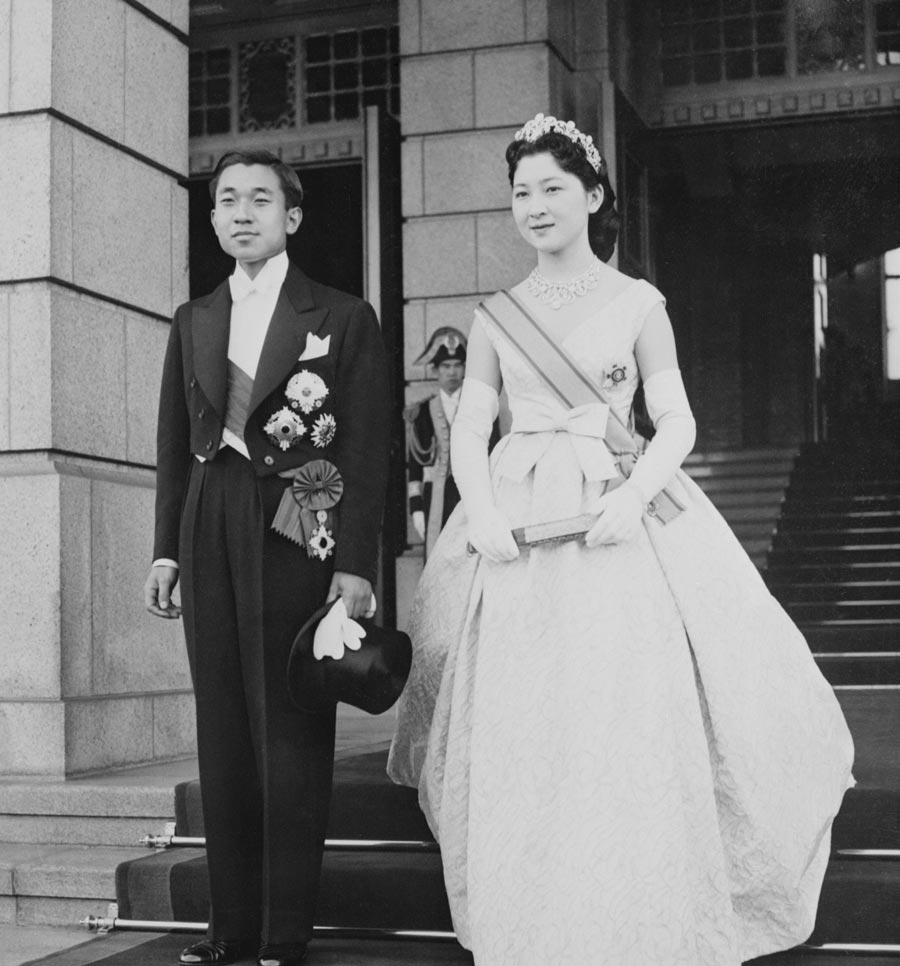 Following their wedding ceremony, then Japanese Crown Prince Akihito and his bride, the former Michiko Shoda, pose together before beginning a triumphant drive through the streets of Tokyo, April 10, 1959. (Photo: Bettmann / Contributor/ Getty Images)

For the first time in over 200 years, a Japanese emperor has stepped down from the imperial throne. Emperor Akihito, who is 85, will cede his place to his 59-year-old son, Crown Prince Naruhito. Here, we look at what the monarchy means to Japan and its society of elders over which the emperor reigns.

It enthrals as much as it confounds: Japan’s mega-troprolis.

On the you-got-me part of the deal, during a week-long visit to Tokyo last year, I did all the unmissable things: from checking out the iconic pedestrian scramble at Shibuya Crossing, where for nearly one minute, when the lights turn red, five separate crosswalks flood onto the street in a buckshot of humanity (and in the most stirring form of organized chaos you can imagine) to visiting the world’s largest fish market known as Tsukiji, through which some 2,000 tons of seafood is funnelled each and every day (a must-be-seen-to-be-believed crush of fishmongers, auctioneers and buyers).

I also did my share of temples: from the serene spell of Meiji Jungu, an important Shinto shrine (where you are encouraged to write secret wishes on little pieces of paper and tie them onto the prayer wall, as the locals do) to the modern abbeys of commerce that span both Ginza and the fashionable Aoyama district (Chanel, Prada, Mikimoto—each storefront an architectural marvel more intergalactic than the next!).

I went to hole-in-the-wall noodle shops. I went to Michelin-stacked gems. I went to a surrealistic only-in-Japan robot restaurant.

But as much of a mind-blow as it all was—a city that is sui generis in terms of its axis between old-fashioned manners and high-tech everything with vestiges of an ancient culture lurking out from among the skyscrapers—I couldn’t shake the feeling of dislocation I felt when there. Even as something of a fortified world traveller, the place felt more “foreign” to me than any major city I had visited. More than Mumbai. More than Hong Kong. More than Istanbul or Beirut.

And as much as that is the very reason to make a Tokyo excursion—a balm to a hyper-globalized world and a time when all our surface esthetics come blurred by a sameness only a Google click away—it can also be startling in its otherness.

Unlike the other cities I mentioned and much of the world, really, where centuries of colonization plus open streams of immigration have created melting pots of culture, not to mention mishmashes of history that we almost take for granted, Japan is still fascinatingly homogenous. Sometimes claustrophobically so. (The stats bear this out: with a population of 127 million, the country is composed of a 98.5 per cent ethnically Japanese people.)
The only thing possibly more monochrome and specifically peculiar? That would be the Imperial House of Japan itself—an institution that is the longest-running hereditary monarchy in the world and, in this way, endures as a metaphor of the country’s claustrophobia itself. Its members famously cloistered—certainly more cloistered than we are used to seeing with the members of the British Royal Family—its durability happened to be all the talk when I was on my visit. Topic A. Subject Uno.

Will he—or won’t he? At the time, the question of the hour re: the long-reigning Emperor Akihito and the persistent murmurs about an abdication. “He had a heart bypass,” a woman quietly interjected when the subject came to pass at a communal table I was sharing one night at the top of the dreamy New York Bar on the 52nd floor of the Tokyo Park Hyatt (made famous for Scarlet Johansson’s own dislocation in the Sofia Coppola classic, Lost in Translation). “He is in his 80s and has had prostate cancer,” someone else—a long-time expat—mused during a visit to the Mori Art Museum.

Indeed, just a few months after my time in Japan, its government shushed the speculation and actually pulled the lever: legislation was passed to accommodate Akihito’s wishes because the current imperial household law has no express provision for abdications, and a date was set for the Chrysanthemum Throne—as it is known—to pass to Akihito’s eldest son, 57-year-old Prince Naruhito. April 2019: when, for the first time in two centuries, an emperor from the Land of the Rising Sun will officially step down.

Cue all the proselytizing that followed about how the arc of these royals aptly mirrors the plateauing of the population as a whole—a country that is not only homogeneous but also greying, what with Japan boasting the oldest population in the world.

The demographic singularness of Japan—28 per cent of its residents are over the age of 65—was even reinforced by a well-publicized move by its government to ease people out of their cars. With one in seven people over the age of 75 still driving—double the figures in Canada and the U.S.—the New York Times recently reported that these drivers “caused twice as many fatal accidents per 100,000 drivers as those under that age.”

Among drivers 80 years old or more? The rate was three times as high, with the news media regularly featuring “grisly reports of deaths caused by older drivers, some of whom are later discovered to have Alzheimer’s disease.”

Since 2009, the Times clarified, “all drivers 75 and older must submit to a test of their cognitive functioning when they renew their licences,” while under a new traffic law put into effect in 2017, those who score poorly are sent to a doctor for examination.

The number of drivers over 65 who’ve chosen to voluntarily give up their licences across the country in the last five years? More than tripled. The emperor may be voluntarily exiting his throne, but plenty, across the country, are abdicating their seats behind the wheel. How’s that for mirroring?

Cue, too, at this time: all the chatter about an incredibly shrinking monarchy. The emperor’s announcement of his departure coming on the heels of the news that Princess Mako, Akihito’s granddaughter, had signalled to marry a non-royal and thus give up her royal title as per the rules left some to note that the situation would leave the imperial clan with just 18 members, 13 of whom are women (none of whom are eligible for the throne).

Naruhito, the incoming emperor, does not have any sons, so then succession would technically go to his brother, 52-year-old Prince Akishino, after which it would pass to his son, now 12, Prince Hisahito. If Hisahito doesn’t have any sons, it’s the end of the line. “A lot, in other words, is riding on little Hisahito to replenish the stud book,” as The Economist put it last year.

In terms of pressure, there is enough to go around, particularly with the incoming Empress, the Harvard- and Oxford-educated Masako Owada, wife of Naruhito. Her life since marrying the prince 25 years ago has resembled more of a tragedy than a fairytale – almost a living emblem of the emotional inertia that is a feature of the collective Japanese experience.

After a much-ado wedding and a love story painted as the romance of the century, the transition from cosmopolitan Tokyoite to demure royal began taking its toll, especially after she miscarried their first child in 1999 and then was unable to produce a male heir. She was also criticized for her extravagance and her shirking of royal duties. By 2004, things had become so much, she had a well-reported breakdown—one that left her unable to speak for months. In 2015, Masako finally made a return to official duties. And now, in months, Empress. Will she be able to cope? It remains an open question.

With Akihito a tremendously popular and almost transcendental figure since succeeding his father, Hirohito, Japan’s wartime emperor, in January 1989—together with his own bride, Empress Michiko by his side—this whole moment most definitely represents a jolt in Japan’s history. To think, when Hirohito was on the throne, he was viewed as something no less than a divine figure, and few had even heard his voice.

Escaping one day during my own visit from the neon frenzy of so much of Tokyo—its wild tapestry of Company Men and Harajuku Girls—I made a dash to the vast compounds that encircle the Imperial Palace. Winding toward the East Garden on a path of where there are said to be 50 different species of plum trees (“the hill of the plum trees,” as it is known) and making my way through a medley of pagodas and ponds, I saw rising up from a distance the current seat of the monarchy. It was closed.

It is only on the New Year (Jan. 2) and the current emperor’s birthday (Dec. 23) that the palace itself is flung open to the public, on which occasions the entire royal family appears on a balcony before the crowd, and the monarch gives a short speech offering tidings of health and blessings.

A version of this story appeared in the October 2018 issue of Zoomer magazine.