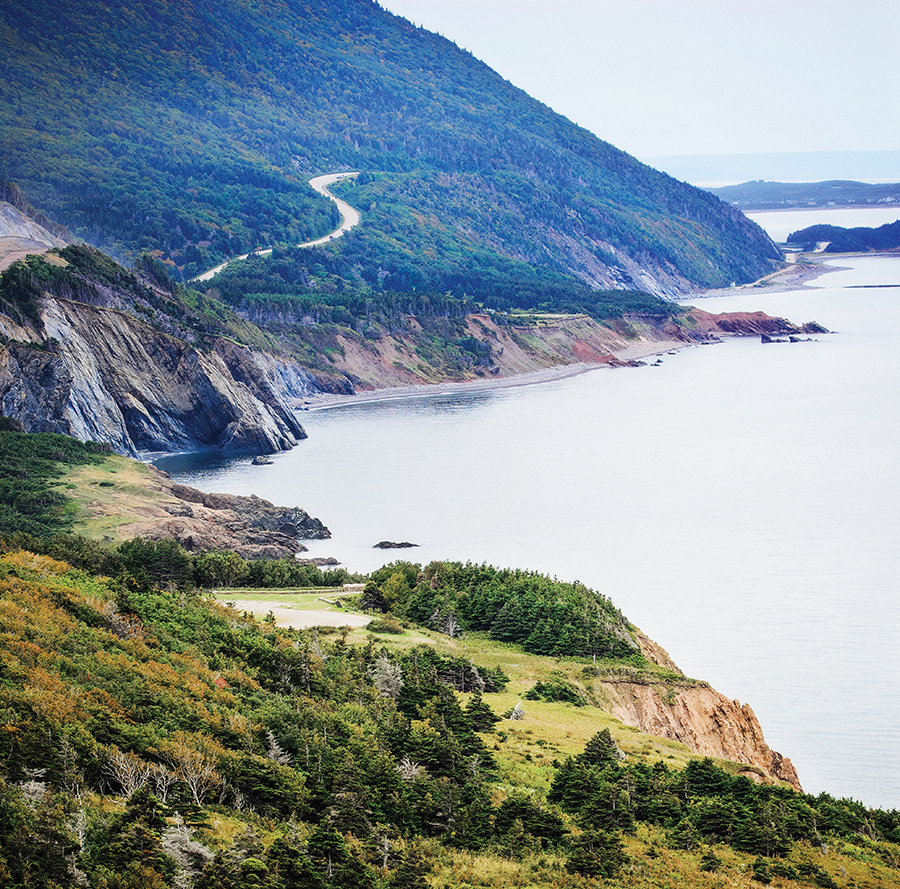 Cape Breton’s Cabot Trail may offer spectacular ocean views, old-growth forests and huge granite outcroppings, but it’s the 300 kilometres of winding roads looping around the top of Cape Breton Island that make the eight-hour drive a pure delight, especially when the leaves are putting on their autumnal show and you’re behind the wheel of a racing yellow Porsche 911.

“Eyes up!” Kees Nierop in the lead car calls out over the walkie-talkie to the three cars following him. “Don’t stare at the car in front of you. If it drives off the road over the cliff, you don’t want to follow it.” But how can you not stare at the elliptical curve of a Porsche 911 Carrera S with a spoiler that reminds me of my nephew’s Hot Wheels (and my great-nephew’s Game Play)?

When the former professional racecar driver orders, “Eyes up,” the drivers behind him look up; when he says, “Breathe,” we all inhale; when he says, “Stop to look at the leaves,” we stop though it’s hard to. The views are spectacular with the red, bronze, gold and green of the trees painting the landscape in an almost surreal way. The trees give way to craggy cliffs interspersed with waterfalls crashing to the shoreline and sandy beaches.

We’re following Kees (pronounced “Case”) who, my travelling companion and well-known auto writer Lesley Wimbush tells me, has raced LeMans and Daytona and won at Sebring, on the first three-day Porsche Driving Experience in Nova Scotia. Along the way, he’s imparting driving tips. Drive smoothly with calm movements; “Fast steering and hard throttles are for the movies,” he adds. Slow down before you turn: brake on the approach, then release the brake before turning and accelerate after exiting the turn. When spinning out, steer in the opposite direction; maintain speed without accelerating. And when in the driver’s seat, your foot should be able to be flat under the brake with wrists on top of the steering wheel: this gives you a nice bend when your hands are at 9 and 3 (not 10 and 2). Lessons learned.

We are eight cars in total, split into two groups, each with an instructor who directs, inspires and (in our “Case”) entertains over a two-way radio. We’re a diverse group: a couple of journalists, a few Porsche owners, several car buffs and one driver who simply wants to cross Drive a Porsche off his bucket list. After meeting at the airport and “claiming” our cars, the convoy heads out to Peggy’s Cove, where busloads of visitors have packed the grounds of the perennial tourist draw. It’s postcard perfect, the giant rocks worn smooth by the surging waves of the ocean. Signs warn tourists off the black rocks where sudden high waves can be hazardous. Our stop is a brief one, and we head back on the road for six hours of driving through countryside and small towns on a circuitous route to our first night of lodging at Fox Harb’r Resort — owned then by the late Ron Joyce, the co-founder of Tim Hortons — just outside Wallace on the north shore of the province. We’re all eager to hit the Trail tomorrow.

The next morning, the groups swap cars. Lesley and I jump into a slate grey Porsche 911 Carrera GTS and head for the Canso Causeway, with her happily sharing her automotive knowledge with this neophyte. This almost mile-long rock-filled causeway built in 1955 links Cape Breton Island to Nova Scotia’s mainland (prior to its construction, the only access to the island was by ferry). Only 150 kilometres to go to reach what is considered one of the world’s best road trips. We’re about to find out why.

Now the amplified beauty of the ride begins. The iconic Cabot Trail, completed in 1932 and named for the explorer John Cabot (although it’s doubtful he continued on to Cape Breton Island after landing in Newfoundland in 1497), starts with gently rolling hills and broad valleys that offer prime agricultural opportunities on the southern reaches. The Cape Breton Highlands, part of the Appalachian mountain chain that is 480 million years old, with its deciduous forests boast snapshots of quintessential autumn colours. We keep driving, heading toward the west coast of the island where the steep rock faces drop off into the Atlantic Ocean. The mountains rise out of the waters as they were etched eons ago by glaciers moving south. Roads carved along these cliffsides hug the curves like a circular staircase and, in our Porsches, we have the smoothest ride of all. Icon meet icon.

For more information, go to porscheexperience.ca

A version of this article appeared in the July/August 2019 issue with the headline, “My Friends All Drive Porsches,” p. 82-83.