From Frank Sinatra to JFK, the Scandalous Side of Palm Springs 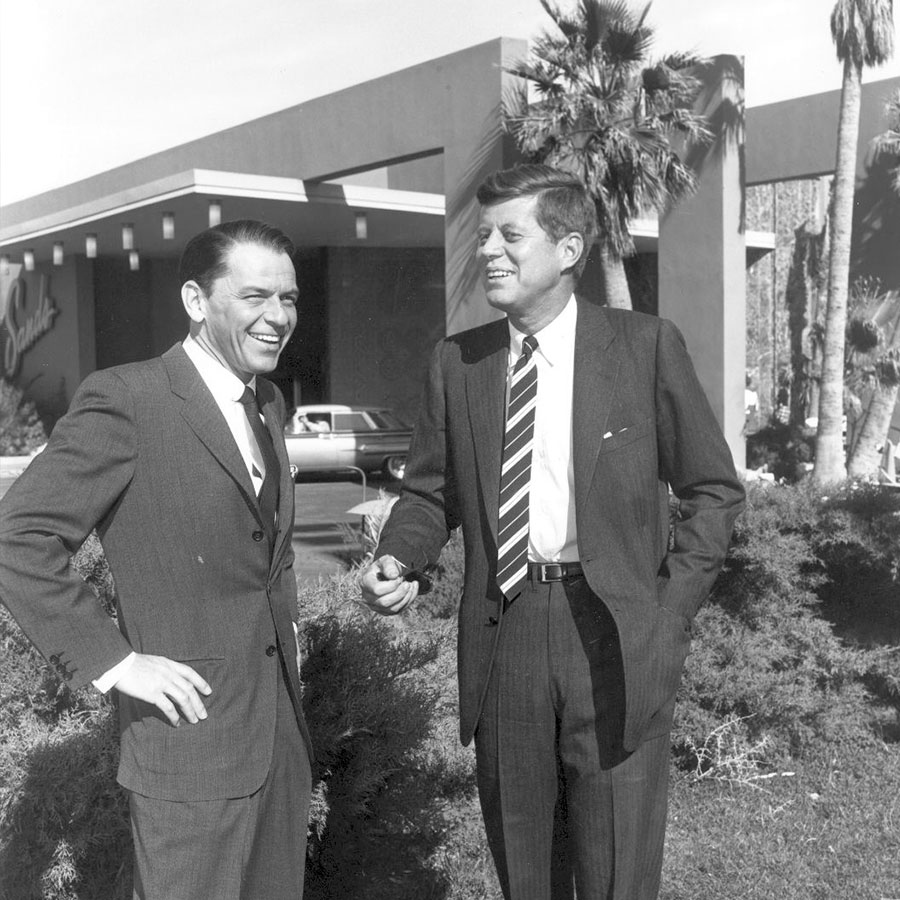 Over there is where Ava Gardner tossed a bottle of champagne at then husband Frank Sinatra. Around the corner is a love nest built for Tony Curtis and Janet Leigh. And just a stone’s throw away is the house where Marilyn Monroe and Joe DiMaggio spent their honeymoon, which wasn’t exactly a romantic home run.

The Palm Springs Movie Colony district is famous as a retreat for the brightest of Hollywood stars, who’ve been coming here for decades and messing up their lives the same way they do back home. The Palm Springs Historical Society knows what kind of gold mine they’re sitting on, and they’re smart enough to offer tours of the city that dish out everything from history and architecture tips to juicy gossip about the likes of Clark Gable, JFK and Ol’ Blue Eyes himself.

I signed up for a recent tour and was regaled with dozens of great stories as we ambled past gleaming white low-rise buildings surrounded by towering palm trees and brilliant red bougainvillea, backed by the craggy peaks of the San Jacinto Mountains. I’m not a huge Hollywood gossip guy, but I was drawn to the beautiful homes and the stories of celebrities behaving badly in this famous desert playground east of Los Angeles.

My small group was led by local guide Dean Waller on what’s called the Frank Sinatra Neighbourhood walking tour. Movie stars, he explained, used to have morality clauses in their contracts (how quaint) and how they weren’t allowed to travel more than 100 miles from Hollywood until their motion pictures were totally wrapped. They didn’t want to party in L.A., with so many gossip magazine reporters around, so they started fleeing to Palm Springs.

Waller had the inside take on when Sinatra was just a start up: the singer had a contract to work with the Tommy Dorsey Orchestra early in his career and that, if Sinatra left the band, Dorsey would collect a cool 39 per cent of Sinatra’s profits (some sources suggest a slightly different number) for the rest of his career. Sinatra was getting very popular and wanted to be on his own. Dorsey said no. Sinatra brought in a lawyer. Still no dice.

But then Sinatra got smart. He called on some friends in New Jersey, who paid Dorsey a visit. Lo and behold, Sinatra and Dorsey reached a deal. Clearly, I thought out loud, “They made him an offer he couldn’t refuse.”

It was at 1145 E Vía Colusa, the Palm Springs house that Sinatra had built in 1947, where a few more juicy bits were revealed. Sinatra taught Sammy Davis Jr. to swim in the pool at the house, which was host to many a late-night Hollywood soirée. Sinatra christened the estate Twin Palms, and when he was in the mood to party, he had a signal: he’d run a Jack Daniels flag up between the two trees.

While Sinatra was married to superstar actress Ava Gardner, the two spent a lot of time at the house. But, apparently, they fought like cats and dogs. But forget the Jack Daniels. Gardner had more expensive tastes. According to Waller, “The story goes that one day she threw a bottle of Champagne at him.”

Twin Palms is now privately owned, but can sometimes be rented out. Waller said Ryan Gosling and his wife Eva Mendes stayed here around the time La La Land was up for an Academy Award as Best Picture. That didn’t work out so well (the movie lost out to Moonlight), but neither did Sinatra and Gardner.

Towards the end of our walk, which takes us along streets lined with towering palm trees and past glorious, sun-drenched estates, Waller told us that Sinatra was known as a guy who would give a $100 tip to a waiter, back when a $100 was a lot of money.

“But Frank was also known to hold a grudge,” Waller shared. “At one point he moved out near Tamarisk Golf Club. He heard president Kennedy was coming to the area, so he had a helipad built at his house for him.”

Sinatra’s idea was that JFK would stay at his place. But Bobby Kennedy, then the U.S. attorney general, had a fit. Bobby told his big brother he couldn’t spend the night with a guy with ties to the mafia, a group Bobby was charged with investigating.

Although it’s labelled a Sinatra tour, Waller also drops the names of other stars who spent time in the glorious Palm Springs sun, including Cary Grant, Hugh Hefner and Roger Moore.

Grant lived in Palm Springs with one of his four wives, Barbara Hutton, heir to the Woolworth family fortune. The papers dubbed the couple “Cash and Cary,” which the refined Grant did not find amusing. We also heard the story of how Grant came home from boarding school when he was eight years old and was told by his father that his mother had died. He found out 20 years later she had been put in a mental institution.

As we checked out a gleaming, all white home at 641 N Camino Real that was once owned by Tony Curtis and Janet Leigh, the owners came out to chat about how hard it is to keep clean. Apparently it was just as hard for the stars to do the same.

We also strolled past a regal, Spanish colonial home at 935 North Avenida Palmas, where Monroe and DiMaggio spent some of their honeymoon. Talk about your failures to launch.

As we walked past a home where Van Johnson lived, Waller talks about the famous story of how Hollywood execs were worried the public would find out Johnson was gay. MGM studios convinced Evie Wynn to leave her husband, Keenan Wynn, so that she could marry Johnson, a good friend. Waller said Evie Wynn and Johnson got married the day after the Wynn divorce was made official. Like many Hollywood marriages, and some Hollywood movies, it limped to an unsuccessful conclusion.

Another juicy story tells how Loretta Young, a strict Catholic, had Clark Gable’s daughter out of wedlock after a tryst on a train. She put the baby up for adoption at a young age, but then retrieved the little girl and pretended to “adopt” her. Waller said many people in Hollywood knew the story, but that the daughter grew up unaware that her father was one of the most famous actors in the world.

The Sinatra Neighbourhood Tour is put on by the Palm Springs Historical Society. They also do tours centred around “Golden Era Hollywood Homes,” “Inns, Architecture and Glamour,” and several other themes. Different walking tours take place on different days, so plan accordingly. The tours cost US$25. If you need a specific time or date, or want to avoid long walks, check out their private tours. Besides learning about movie stars and other celebrities, with Waller you’ll get great information about Palm Springs architecture, real estate and even local plants and flowers.

The Westin Rancho Mirage Golf Resort & Spa is a great family spot with lots of space, as well as a lovely golf course and a great swimming pool with zippy slides.

Willie’s Modern Fare is a bustling spot in Palm Springs. I had a fine meal of perfectly cooked duck with a luxardo cherry glaze and an outstanding dessert called a Pineapples Foster Butterscotch Trifle. Almost zero calories.

Workshop Kitchen + Bar is a fine downtown dining spot with great food and a terrific patio in a quiet courtyard. Try the California Dreamin’ cocktail with vodka, lemon juice, grand poppy liqueur and orange oils. The Doro Wat chicken with Ethiopian spices is rich and flavourful.

Besides golf and great shopping, there’s amazing hiking in the Indian Canyons.

The Living Desert is a wonderful outdoor museum with plants and animals from around the world, including wallabies, bald eagles and giraffes you or your kids/grandkids can feed. The Palm Springs Art Museum has bold, striking art on display and a giant Marilyn Monroe statue out front that’s great for social media posts.