How Boating Can Teach Grandkids To Stay Afloat 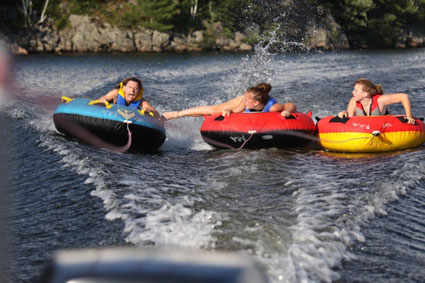 Picture this: you and the grandkids all packed onto the back of your boat, bobbing alone on the calm blue waves. There’s nothing to do but bask in the cottage country air and talk to each other.

The reality: At about the seven minute mark the outing devolves into a re-enactment of mutiny on the bounty, with grandma tied to the mast, gramps walking the plank and the grandkids making a frantic swim for shore.

Don’t worry, it doesn’t have to end that way – at least according to psychotherapist, parenting expert and best-selling author Alyson Schafer. And she would know. As a “multi-generational cottager,” Schafer spent many of her formative years with family on the water.

“My grandparents actually lived on a boat,” Schafer recalls. “So the way you’d go visit grandma and grandpa for Christmas, we went to their boat. We were all learning Morse code and learning the flags – it was just the whole mindset.”

Aside from the fun of it all, Schafer says introducing kids to a set of sails early in life could actually prove beneficial to their overall development.  That’s because, “the disparity between urban versus boating culture is becoming more prevalent, that we almost have to force experiences into our kids’ lives to give them exposure to some of these things that we know are psychologically important to them.”

So, if getting the kids to take out the garbage or clean the dishwasher leaves you feeling like you just weathered a perfect storm in a dingy, it may be time to bring them down to the dock.

“[You] get a family on a sailboat, you can’t have one person running around doing all the ropes and all the sails,” explains Schafer. “Everyone has to pull their weight and do something. It’s almost as if it’s a way that parents almost can liberate themselves to say, ‘Yeah, I’ve got to get the kids involved.’”

And guess what – the kids will probably enjoy it. One reason is that boating actually provides what Schafer calls the “four crucial A’s” – keys for developing resilience that children need early exposure to if they’re to hone the skills necessary to cope with life’s rough waters.

The four crucial A’s are:

Affiliation: “A sense of belonging is key to human beings. Who am I, who are we? We’re boaters, we’re cottagers. In our family, the kids see pictures of their great-grandparents pulling up to the same dock and stepping onto the same rock we step on. And certainly acting like a crew– you belong, you’ve got a job to do on the boat.”

Able: “We have to eventually develop ourselves to be competent and self-determined and masterful. That’s a natural part of our psyche’s need. I’ve had several situations where I’ve had to use my smarts on the water and it’s left me feeling [like] I can … be more courageous because I’ve had these experiences that allow me to have faith in myself.”

Added Value: “The idea that every human being needs to feel that they are here for a reason. It comes down to asking people to participate and contribute, pulling in a line and bailing the transom and all those millions of roles. You matter. You’re impacting all of us.”

Alright as I am: “That, again, comes down to courage. In city life, things tend to be Kumon Learning Centres and … ‘Don’t waste you time in leisure, you’re supposed to be improving yourself.’ [On the boat] it … gets out of the competitive and it allows parents to mentor in a more joyful way that seems to focus a lot more on the effort and the process. [It] speaks to, you don’t need to be perfect, you don’t need to compete, we’re just on a journey of improvement.”

Sure there are other activities to do with the grandkids to help develop the four A’s, but Schafer points to an 80-year-old cottage neighbor – a woman with two hip replacements – who, “ lays on the dock and rolls into her canoe, and [then] she canoes,” as an example of how the resilience learned from being around boats her whole life sticks.

If you’ve already got a boat and want to get your grandkids involved, Schafer advises “present[ing] it as something fun and curious to learn,” correcting mistakes as you go while keeping the process educational and fun. And these days, with fleets of helicopter parents hovering over their child’s every move, who better to learn the finer points of resiliency from than “the greatest generation”?

“I think that generation before us understood the concept of grit,” Schafer concedes. “They understood living through the depression and the war. They didn’t have the unchallenged life that the boomers have had. So they do see that we’re too coddling and they’re trying to push us back a little bit more into common sense and I think they’re quite right.”

If you don’t have a boat, join a local marina where there’s likely a large multi-generational boating community to help you learn the basics. “To step into a culture that’s a little more established is probably going to be helpful.”

Then, before you know it, you could be out navigating the waves, your grandkids receiving valuable life lessons while forging a familial bond that may otherwise prove slow to emerge.

“When you’re in a boat you have to talk. You have to interact,” Schafer laughs. “And before you know it, [the] teenagers are talking to you about things you that wouldn’t have heard otherwise and people are giggling. Even if they moan in the beginning, they have good memories later. It is kind of a contrived situation that does bond.”

Nevertheless, you may still want to invest in an inflatable lifeboat, in the event the whole mutiny scenario plays out. It’s better to be safe than sorry.

Alyson Schafer discusses how “Boating Provides What Every Child Needs to Succeed” at the Toronto International Boat Show this Saturday, Jan. 12, at 1 p.m., and then takes part in “Confessions of Boater Mammas” at 3 p.m. For more information, click here. For more on Alyson Schafer, visit www.alysonschafer.com.