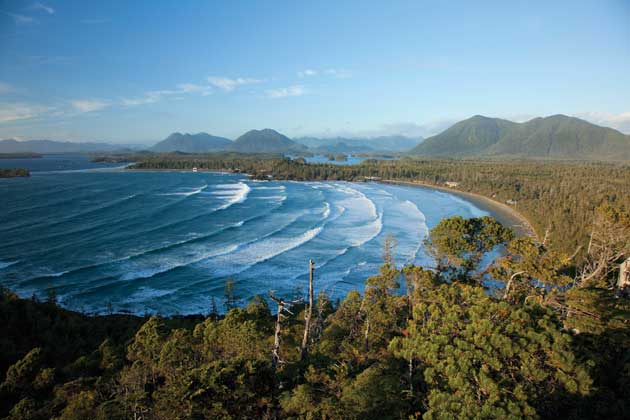 Country strong: from ocean-soaked days to starry, starry nights, here, just a few of our favourite things about the great white and sunny north.

As I approach the wind-whipped waters of the North Pacific, my heart beats in sync with each footfall, an echoing thud that reverberates through my entire body. The end of my surfboard drags on the sand behind me, testimony to my beginner’s awkwardness – and hesitation.

I’ve spent the last hour of this autumn morning on Chesterman Beach near Tofino, B.C., practising pop-ups on an imaginary surfboard drawn in the sand. (Let’s just say that due to my lack of artistic skill, I was sand-surfing on a giant misshapen pickle.) Krissy Montgomery, owner of Tofino’s Surf Sister, has walked our group through the basics of position, paddling, getting up on the board, surf etiquette and how to cover our heads for when we (inevitably) fall. She’s now waiting in waist-deep water to help me catch my first wave.

Surf Sister is known for promoting women’s surfing but offers group and private lessons to men and women of all ages and abilities. I’m travelling with a group of women of varying surf experience, and Montgomery and her fellow coach individualize our instruction. Today, the oldest beginner is in her late 40s, but Surf Sister has taught new surfers well into their 60s.

The ultimate in surf education is one of Surf Sister’s progressive five-day surf camps. We only have the morning, which passes in a blur of adrenalin and laughter. My falls feel epic, but I know they more closely resemble a rolling turtle than one of those gnarly wipeouts in Point Break. I do manage to stand briefly on the board to the enthusiastic cheers of Montgomery. Thanks to my wetsuit, I’ve forgotten about the cold water and am completely focused on getting in as many runs as possible. All my initial hesitation has evaporated in the thrill of gliding on the waves, whether it’s on my belly or those fleeting seconds after I actually “pop up.”

Though exhausted and a little sore, I’m still riding that high that afternoon, as I soak in the hot tub on the deck of one of the many private beach houses at Pacific Sands Beach Resort. Seven kilometres from the village of Tofino, Pacific Sands sits on the rugged undeveloped coastline along the crescent beachfront of Cox Bay, offering a front-row seat to nature’s dramatic storms. Luxuriating in the soothing water, I watch advanced surfers tackling the immense swells rolling in. The beach houses also provide the ideal vantage point to watch the sun set over the ocean, between towering conifers, a wild, untamed vista that I’ve come to associate with the West Coast.

There is another deck off the bedroom of my beach house, and every night I leave the door ajar so I can be lulled to sleep by the rhythmic break of the water against the shore. I wake to pale light filtering through the towering cedars and let myself languish, soothed into the pace of life in this coastal town. But hunger motivates me to get moving and I embrace the local foodie culture. Many chefs, drawn by the lifestyle, have settled here, and all bring into play the bounty the nearby waters provide: fresh spot prawns, Dungeness crab, fresh oysters, and wild-caught Pacific salmon. Each meal feels like a culinary celebration of the ocean.

On the last morning, I walk along the sandy expanse of Cox Bay. It’s raining a little, and while I did bring my own raincoat, I’m compelled to wear the cheery yellow slicker with the sand dollar emblem, which are supplied in every room at Pacific Sands. Standing on a rocky outcrop, I watch the surfers bobbing outside the break, waiting for that perfect wave. While I know I may never be skilled enough to skim across the “green water” breakers with such ease, in that moment I make a vow to myself come back to Tofino to try.