My Sunday with Sergi 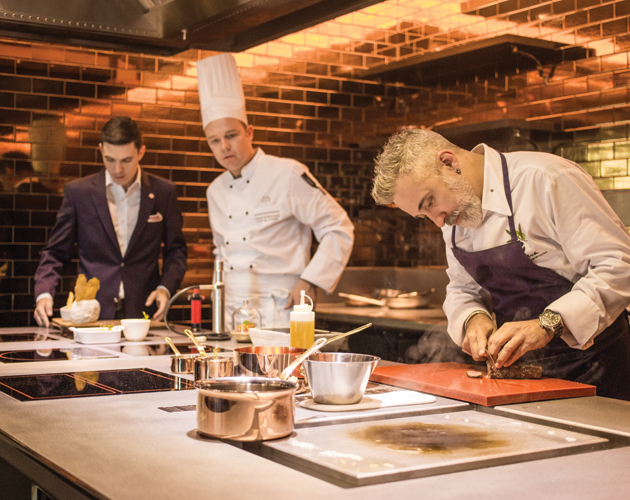 After an Istanbul pit stop, a foodie revels in Madrid

It all started with food. And, then, my senses. Food that played with my eyes, food that I could breathe in, food that tickled my tongue, my tastebuds, my fingertips. Food that brought whispers of more, more, more to my ears.

It all started in Istanbul. In one night, one moment and one man’s absolute culinary cool. Sergi Arola, the two Michelin-starred Ferrán Adrià-trained chef (and I mean that Ferrán Adrià of El Bulli, one of the most lauded restaurants – ever) is in the house.

Yes, absolute. Not just black truffles but white, too. Not just molecular gastronomy but also hints of Catalonian home cooking he learned from his grandfather. Not just plating it but also presenting it so that there is surprise, delight and just a hint of edge.

The truffles, the tasting menu’s inspiration, arrive in bell jars curved as sensuously as a woman’s breast. Once released from their glass cages, their earthy aroma is so intoxicating, I’ve already melted. It’s an almost unbearable tease of what’s to come: a tapas of Spanish cuisine informed by its Middle Eastern-meets-Mediterranean surroundings, at Arola, at the newly minted Raffles hotel in Istanbul, above the haute shopping area of Zorlu Center.

“I love Istanbul,” the 47-year-old chef says in self-taught English, when I ask him why Turkey. “It’s a magic and energetic big city. And I’ve loved Raffles as a brand for a long time.” Enough to leave some of his senior team members here to run the show year-round.

Petite sea urchin shells used as ramekins play host to pink-hued foam, part of a seafood cocktail Arola has christened Bosforo. (From its hillside perch, Raffles Istanbul features a stunning view of the Bosporus Strait that divides Europe from Asia.) White asparagus sprout from a raised garden bed of finely chopped black olives in a high-sided soup bowl. Mushroom ragout is classically coddled French-style, in a reddish-orange, heavy lidded pot straight from oven to table. Undulating wood rectangles balance measured bites of a Spanish tapas mainstay patatas bravas – but Arola’s way: Las Bravas de Arola are fried mini potato cups filled with spicy sauce and topped with aïoli – along with bocata de calamares, squid in a lemony ink, wafer-thin sandwich and a chicken wing that elevates this bar food to new heights. You eat this chicken wing with a knife and fork.

Eggplant is braised, sharing the plate with green olives; lobster paella is a heady perfume of saffron (I did say he is a tease, didn’t I?); and beef carpaccio intensity softens under the subtle crunch of slivers of Granny Smith apples and just a sprinkle of pistachios.

So, when I had the chance to spend a Sunday with Arola in Madrid a month later, how could I resist? The chef makes the Spanish capital his base, although he has restos as far-flung as Mumbai and São Paulo and as close as his hometown of Barcelona. An unpretentious wine and tapas bar, Vi Cool by Sergi Arola, not far from his signature innovative restaurant, Sergi Arola Gastro, are both in Madrid.

Arola doesn’t like to drive; he prefers his bike. And we’re not talking a 10-speed but a Harley, a good fit for his little bit of a bad boy rep – and his tattoos. We are in La Latina, one of the oldest neighbourhoods in Madrid and for a stroll near the Plaza Mayor. It’s an unusually warm and sunny November day. The narrow streets are thick with Madrileños, just in time for a late lunch, tapas, maybe a beer or two. It’s his day off, and he’s not cooking, but he’s hungry to share what he considers the authentic ways of eating in this town.

The streets are lined with little deli/diner-style narrow shops; the specialty from each is the street-food version of bocata de calamares. At Bar La Ideal, a crusty bun is loaded with delicately fried calamari – reminiscent of a New Orleans Po’ boy, but here it is clean, just the calamari in a solo role. It’s crunchy and briny and buttery all at once and goes quite nicely with a caña of beer. “This is a popular typical food of Madrid,” he says, between bites. “Very Madrileño.” When Arola uses the word typical, he doesn’t mean it in the sense we English speakers do. He means it’s true, authentic, been around, definitely not run of the mill. The queue, populated by locals, starts outside the door – a telling sign it’s worth the wait. We eat standing up, as does everyone, the kitchen and its proprietors within view.

Of course, they know who Arola is, yet there’s no sense the “star” chef is “slumming” it here. Over the course of the afternoon, he is recognized, greeted and, in turn, greets those that recognize him. Chefs are akin to rock stars today, feeding us with food for our tastebuds rather than with music for our ears. Somehow, both serve the soul, and it turns out, as a kid, Arola left home early to pursue his dreams of being a musician, before ending up in Adrià’s kitchen. “Music saved my life,” he says. He’s in a band, “but I’m not a rock star,” he adds. Yet he’s asked – more than a few times – by his foodie groupies if they can have their picture taken with him. Twitter and Instagram are buzzing with his image on this day in Madrid, no doubt.

Next, tapas. Mercado San Miguel, the central market, is not just butchers and bakers but “also has places where people can stay and eat,” Arola says, places where they can gather for a bite, a copa of wine or a caña of beer and a bit of community conviviality. Tuna on toast, herring with a dollop of avocado cream, sashimi-style salmon. Stew of veal tripe and chorizo warms it up here, while just down the road at El Viajero, Mojitos made with brown sugar cane cool it all down again. “This is the best cut,” he notes, after taking a bite of El Viajero’s tenderloin, grilled to pink perfection. It gets a largely ignored side of applesauce-like purée; the meat is spiced in such a way that Arola insists it needs no accompaniment.

In between, there is Restaurante Botín, which is, according to the Guinness Book of Records, the oldest continuously standing restaurant in the world. It earns a mention in the closing pages of Ernest Hemingway’s The Sun Also Rises. Inside, the blazing, 18th-century oven may have been stoked for more than 200 years, but who’s to really say? The specialty is cochinillo asado – roast suckling pig – and the shelves are laced with platters of the stuff, either ready to go in or having just come out of the fire. It’s a cavernous spot, with three levels for dining; I go for a quick tour while the owners chat up Arola, happy to have a star in the house. It’s a family business, and the boys in the kitchen are in full cook’s white regalia, hats and kerchiefs included.

We finish the day at Arola’s wine bar, Vi Cool, for a light supper. I don’t need to look at the menu. I’ve been following chef’s lead all day – why stop now? Steak tartare comes topped with a saffron-hued yolk, bravas Arola-style are just the right one-bite mouthfuls – and the chicken wings? Well, yes, you eat these with a knife and fork, too.

Arola is on the hunt for his third Michelin star. If his appetite for the food and the people of this town is any indication, the hunger game’s on.

In Istanbul, stay and dine at www.raffles.com/istanbul/dining/arola