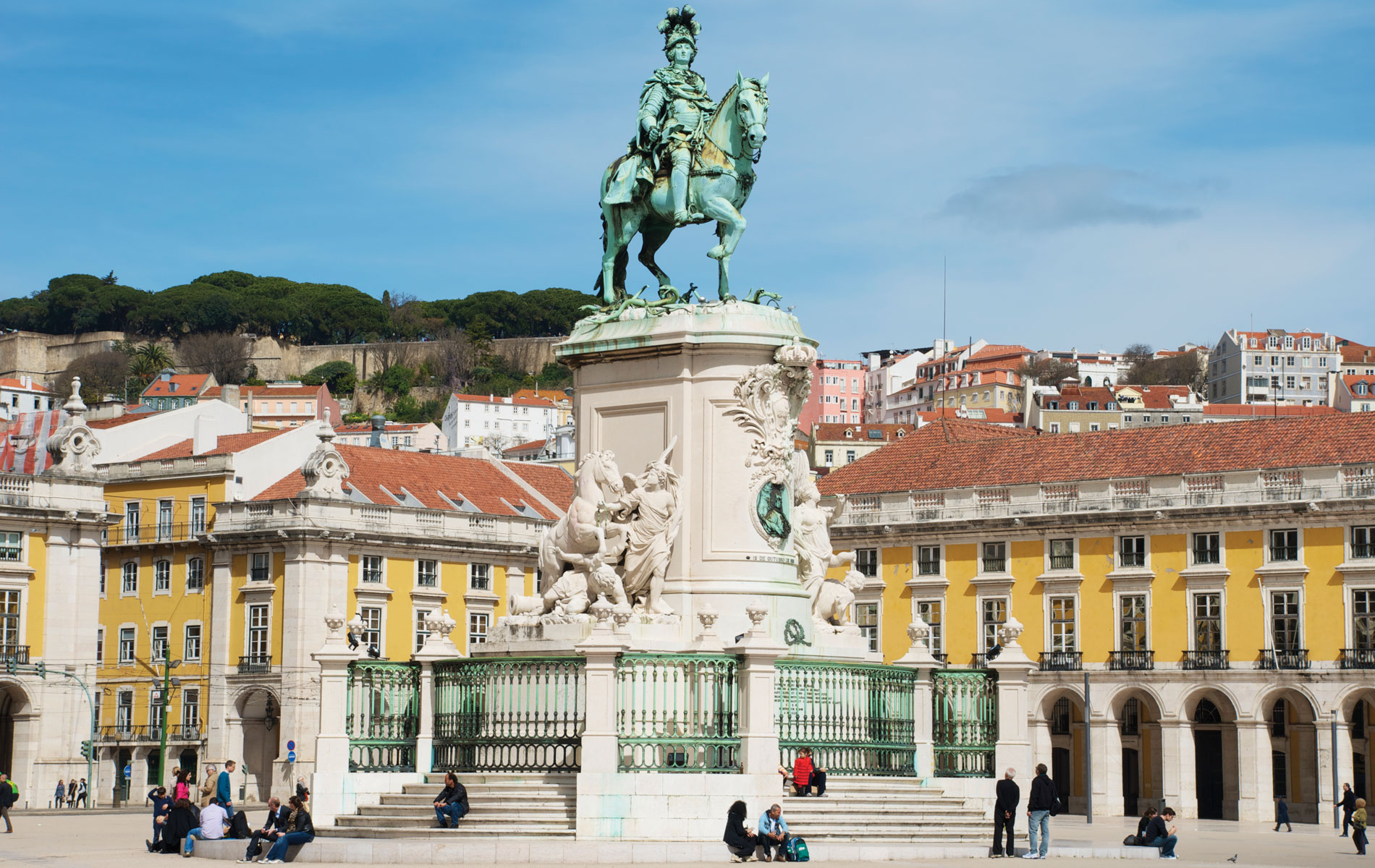 In this tale of two cities, Vivian Vassos discovers that folk music is the tie that binds.

On this stop on our coach tour, we’re on a mission. We’re on the hunt for fado. No, that’s not a new-fangled taco or a tongue- in-cheek twist on my dog’s name. It’s a form of storytell- Luso, set to music, set in the heart of the city. At once deeply roman- stage himself.  At once deeply romantic and mournful, the lyrics are rife with pining, heartbreak.

It’s raining on this night, and the best place to find fado is down the narrow, cobbled corridors of the old town in this, the oldest capital city in Europe. The cobblestones reflect the street lamps’ light, glistening, fresh with drizzle. Moody? Yes. Perfectly timed? Maybe. Toni Aguilar, a tour director at Insight Vacations who is functioning as our on-site concierge, has set his sights. The Spanish native notes this particular style of music, unique to Portugal, is one of his favourites.

“It’s so full of emotion,” he says, “like the Portuguese people.” The heart-wrenching folk music is also a favourite of UNESCO, as the United Nations’ arm, charged with educational, scientific and cultural preservation, has designated this art form as a world cultural heritage. Aguilar has spotted it, the Cafe Luso, where the 60-something proprietor has been known to take the stage himself. We have arrived.

Inside, we take a moment for our eyes to adjust to the dim of the candlelit tavern. Against one wall, three men sit, instruments in hand, tuning up. A moment later, a woman, dressed like an opera diva with a hint of flamenco dancer thrown in, strides over to them. She turns to face us, closes her heavily made- up eyes while clasping her hands in front of her. The guitarist begins to play, slowly.

And, then, she sings. I don’t speak a word of Portuguese, but the longing in her voice is not lost in translation. Around the room, patrons are transfixed into silence – some couples catch them- selves holding hands and gazing into each others’ eyes while the band plays on. Spellbound,we pause when she’s finished her song before giving her a rousing ovation. She’s shared her tale about her secret love, her deep passion, and now we’re in love, with her and her heart.

It’s cultural moments like these with their universal appeal that in- spire us to get up and go, to travel more, see the world. And with the Euro trading well (at press time) against our loonie, Lisbon and Portugal in general is particular- ly wallet-friendly. Think of it this way: a martini may cost you $20 in Rome; in Lisbon, it might be about $14. That’s $6 you can spend to treat yourself to a sweet pastéis de nata, the classic Portuguese egg custard tart. Oh, and our concierge has provided the secret recipe for those, too.

The Food
Jumbo sardines are the specialty all over Lisbon, but if you’re a seafood fan, head to Frade dos Mares, where the freshly grilled octopus is only matched by its olive oil and garlicky accompaniment. Med diet food at its modern best. www.fradedosmares.com.

The Cafe Society
Lower Town, in the central part of the city, is on a grid plan, which makes it fairly unique to Europe. Easy to navigate, pretty much all roads lead to Rua Augusta (yes, it seems the Romans were here, too!). The pedestrian-only thoroughfare takes you past some of the most popular people-watching curbside spots, down to the impres- sive Comercio square and its view of the Tagus River. And if you’re the bookish type, what’s said to be the oldest bookstore in the world.

The History
The Belém Quarter is the seat of the city’s religious and naval exploration his- tory, with the Jerónimos Monastery and the Church of Santa Maria – the final resting place of seafarer Vasco da Gama, known for leading the Portuguese fleet on the first- ever voyage around Africa and on to India in 1498.

Oh, and that custard tart? Antiga Confeitaria de Belém, just down the street, is where the pastéis de nata was born. It’s no wonder that they bake about 14,000 a day and, on Sundays, the ovens churn out as many as 50,000. Sweet.

NEXT: HIGH NOTES OF DUBLIN

Dublin
I’m on the Emerald Isle, in Dublin, the capital of the Republic of Ireland. There’s an almost palp- able fairy-tale magic here, a mystic- al sort of spirit that’s not so surpris- ing, considering how we still associate Ireland with pots of gold at the end of rainbows, sprite-like leprechauns and, well, luck. It’s also a place where music plays a huge role in how history and stories are passed down, genera- tion to generation.

Our guide, Dubliner Josephine O’Keefe, provided by Air Canada Vacations, gives us a deeper local look. She leads us through Temple Bar, one of Dublin’s oldest neighbourhoods and coolest – U2’s Bono has his hotel, The Clarence, here – like a modern-day St. Patrick on a pilgrimage for the best in local music and craic – general conviviality.

The Oscar-winning film Once, in which a boy and a girl meet on these streets and fall in love through their music, comes to mind as we tread the winding route. Voices in harmony, strains of violins and guitars, waft through the air, bouncing off the historic bricks, creating a melodious soundtrack that’s at once inviting and haunting. We’re here during the city’s TradFest where you can see 10-year-olds deftly beating the bodhrán (Irish drum) and hear Irish icons such as The Dubliners troubadour John Sheahan – who, at 76, still takes the TradFest stage at Dublin Castle with his fiddle, up- staging band mates half his age.

If the music is the roots of story-telling for the Irish people, the surrounding Georgian architecture and seminal historic sights of interest are their touchstone. O’Keefe leads on, walking us to Merrion Square, where a bust of political revolutionist Michael Collins greets us at the entrance, engaging us to pay respects to fighting for one’s rights, no matter what the cost.

A short stroll reveals a life-size statue of the author and wit Oscar Wilde, in cheeky repose, facing what was his house, just across the street. Later in the day, a tour through the city’s Glasnevin cemetery and museum reveals Europe’s greatest – and eerily beautiful – collection of stone Celtic crosses and acts as the final resting place for more than 1.5 million people. They’re grave markers, of course, but row on row, these sentinels stand as a testament to belief, strife and the deep- seated ethics of Irish freedom fighters such as Daniel O’Connell.

Known as the Liberator, O’Connell, in the early part of the 18th century, was at the fore of Catholic emancipation and the right for Catholics to run for office and sit in Parliament. He won a seat in the British House of Commons and, in 1829, after many struggles and help from Brit politicos including the Duke of Wellington, managed to influence George IV to allow Catholics and, eventually, British Jews to take the oath of office, without reference to religion. Touch his coffin – his body is interred in a mausoleum on the Glasnevin grounds – and it’s said to bring a bit of that Irish luck.

And, then, there’s Trinity College. Founded by Elizabeth I in 1592, Ireland’s oldest university sprawls over 100 acres, right in the centre of the city. This place, echoing with the footsteps of scholars – James Joyce and Samuel Beckett trod these cobbles – gives one pause.

The stone buildings sit behind a fortress-like wall, and are placed in such a way to allow for natural meeting places and gardens where you might run into a fellow student, or come across an impromptu cricket match on the green on an unusually sunny day in Dublin.

The library, known as the Long Room, is home to more than 300,000 books, some as old as the building itself, while in its Treasury, is the Book of Kells, which almost defies description. It is a ninth-century illuminated manuscript – illuminated in such away that its painted golden hues, outlined in an almost a three-dimension- al manner, reveals an otherworldly, divine text that seems to glow, right off the page.

Why a Guided Holiday?

Air, hotels (in Dublin, the five-star Shelbourne Hotel is an option with Air Canada Vacations), tours, local guides and skip-the-lines at attractions (a pint of Guinness at the brewery, anyone?), as part of a decently priced package. www.vacationsaircanada.com; www.ireland.com

Insight Vacations features Lisbon (and custard tart tastings!) on many itineraries, including Country Roads of Portugal. Plus, you never have to worry about tipping or luggage. Both are handled for you from touchdown to departure. www.insightvacations.com