China: On The Pilgrim’s Path 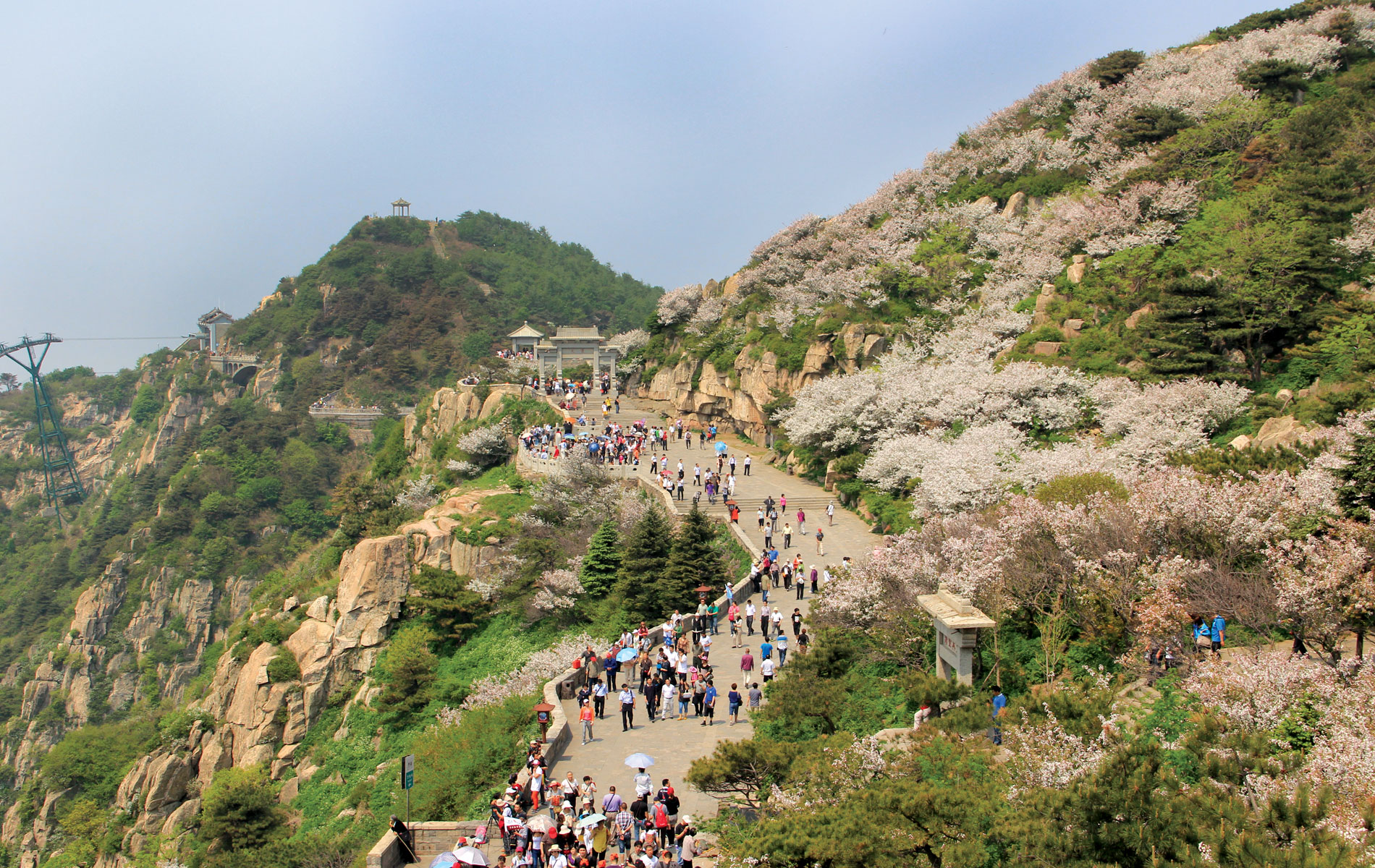 From a revered mountain to the birthplace of Confucius, Athena McKenzie makes a spiritual journey.

Gazing through this celestial gateway, just one of the intricate stone archways high on the paths of Mount Tai, one feels perched at the edge of the earth. The journey up the mountain winds past temples and shrines, through the ochre red walls of the South Gate of Heaven, to this vista of endless blue sky.

People once believed that gods inhabited mountains like Mount Tai in the Shandong province of China. Legend says Pan Gu, the first living being, created the world by separating the heaven and the earth from chaos. When he had finished, the strain of his endeavours caused him to disintegrate, and his head became this holy mountain.

Mount Tai is now a revered Buddhist and Taoist spiritual destination, drawing more than four million visitors each year. Its passageways and public spaces are crowded and hot on this May morning. The line between tourist and pilgrim blurs on Mount Tai, with even the casual visitor being enveloped in the holiness of the site when presented with its historical places and transcendent views.

This mountain has always been a place of pilgrimage. In ancient times, the first act of an emperor on ascending the throne would be to climb Mount Tai and pray to heaven and earth for his ancestors. His success in reaching the summit was seen as divine approval for his rule.

The Doctrine of the Five Elements, a fundamental premise in Chinese thought, considers Mount Tai “the most honoured” of the five mountains symbolizing the Celestial Kingdom. According to this doctrine, the East symbolizes birth and spring, and the mountain’s placement at the eastern edge of the North China Plain make it a important place of renewal.

Watching the sunrise from one of its peaks is so revered that hundreds of climbers ascend or camp on the mountain through the night to be there for first light.

Following in the footsteps of the emperors, most of the pilgrims walk up the 6,600-plus stairs from the Dai Temple at the base of the mountain. The path is believed to link humans with nature and the celestial, and to walk it is to travel the road to heaven. Legend has it that those who climb the mountain will live one hundred years.

The path to Heavenly Street, a row of shops near one of the peaks, is steep enough, meandering slowly through temples, past a monastery, stone tablets and numerous inscriptions in the rock of the mountain. When it was named as a UNESCO World Heritage Site in 1987, the commendation cited the graceful man made structures integrated within the splendid natural environment, calling Mount Tai “one of the most grandiose human achievements of all time.”

In places, the air is fragrant with incense, left by other pilgrims as tribute to their ancestors. There are the shrines draped in chains of locks – inscribed with names and left as prayers – either as love locks to bind couples or safety locks to protect family.

Finding many Westerners on the trail is still uncommon and often the subject of inquisitive looks – and quite a few photographs. This is still fairly uncharted territory.

Along with spiritual seekers, Mount Tai has always been a destination for artists and scholars (“men of letters,” according to our guide), who travelled here seeking inspiration. There are many scenic spots related to the famous sage Confucius, including a stone near the start of the path that according to our guide reads, “To ascend is to know oneself” – another strong argument for taking the time to walk to the summit.

Qufu, the birthplace of the sixth to fifth century BC philosopher, whose ideas – Confucianism – have shaped modern Chinese culture, is only 70 kilometres away from Mount Tai and has itself become a sacred destination.

The city houses the Temple of Confucius, the Confucian Mansion, and the Confucius Cemetery Forest, collectively known as San Fong, or Three Confucian (all UNESCO World Heritage Sites since 1994). The site is considered one of the three great examples of Chinese architecture, along with the Forbidden City and the Summer Palace in Beijing.

The streets outside the walls of the temple are dense with noise, traffic and people browsing the numerous vendors for traditional souvenirs – including a potent liquor called Confucian Wisdom.

Passing through the Gate of the Great Sage into the first courtyard of the temple grounds, one discovers another world of calm and quiet. An egret soars low overhead, an auspicious welcome into the sanctuary.

The familiar tang of incense perfumes the air. Symbols of longevity are found throughout, including the very structure of the temple complex itself: nine, a number normally reserved for emperors, means longevity and the temple is composed of nine courtyards, one within another, divided by gates, temples, houses and pavilions.

Intricately carved dragons line the rooftops, vibrant red doors beckon from each passage, and ancient cypress trees stand as symbols of longevity. The eye is constantly drawn to the strands of red tags hanging from racks outside the temple, inscribed with prayers for long life and luck.

Next to the temple grounds is Confucius Mansion, where his direct descendants lived for nearly 900 years. The walled compound contains more than 150 buildings with many artifacts and family heirlooms on display.

A final stop for pilgrims in Qufu is the Confucius Cemetery Forest, the burial ground of Confucius and more than 100,000 of his descendants, the Kong clan. The tombs are scattered throughout a sprawling woodland, explored on guide-driven golf carts. Towering stone animals and guardians are scattered through the forest like great benevolent spirits.

Deep within the serene refuge is Confucius’s tomb itself, flanked by stone panthers, griffins and guardians. Red ribbons and fresh flowers decorate the resting place of China’s great philosopher.

Legend has it that when Confucius watched the sunrise from Mount Tai, he declared, “The world is small.” That seems never so true as at this moment, having journeyed to the other side of the world to stand in the footsteps of Eastern religion, philosophy and history and how the line between tourist and pilgrim comes to blur.

MasterChef Canada’s irreverent co-host Alvin Leung has brought a new currency to the Chinese culinary scene here and around the world. In Canada, the Scarborough, Ont.-raised chef has just partnered with the show’s first winner, chef Eric Chong, to open R&D in Toronto’s Chinatown.

But it’s in Hong Kong where this master wields his sharpest knife at Bo Innovation, his three Michelin-starred restaurant. Whether you have a 24-hour layover en route to another destination in Asia or days to explore, Hong Kong offers innumerable ways to immerse yourself in its East-meets-West, Old-meets-New fusion of culture. Here, five ways to experience Hong Kong now.

Eat, eat, and eat From inhaling wonton soup at local hot spot Mak’s Noodle to savouring the fare at one of the numerous Michelin-starred restaurants – like river shrimp prepared in tea leaves with ginger vinegar at Ye Shanghai, gado gado at MIC Kitchen, dim sum at Tim Ho Wan or braised beef Hong Kong style at Celebrity Cuisine – the city is a veritable foodie paradise.

Take an architecture walking tour Part history lesson, part leisurely stroll, Hong Kong’s Cultural Kaleidoscope Programme Architecture Walk takes you through the city ‘s evolution, including historical buildings, like St. John’s Cathedral to modernism designed by some of the world’s most renowned architects, such as the Bank of China building by I.M. Pei.

Go back in time Situated in a former police station, the Tai O Heritage Hotel is a unique option – the lobby gift shop is in an old holding cell. Located on the city’s outskirts, it has easy access to the picturesque Tai O fishing market and village, where the fisherfolk have built their homes on stilts above the tidal flats.

Sail the harbour at sunset Take in the city’s skyline while on the Aqua Luna, one of Hong Kong’s remaining traditional red-sail junks.