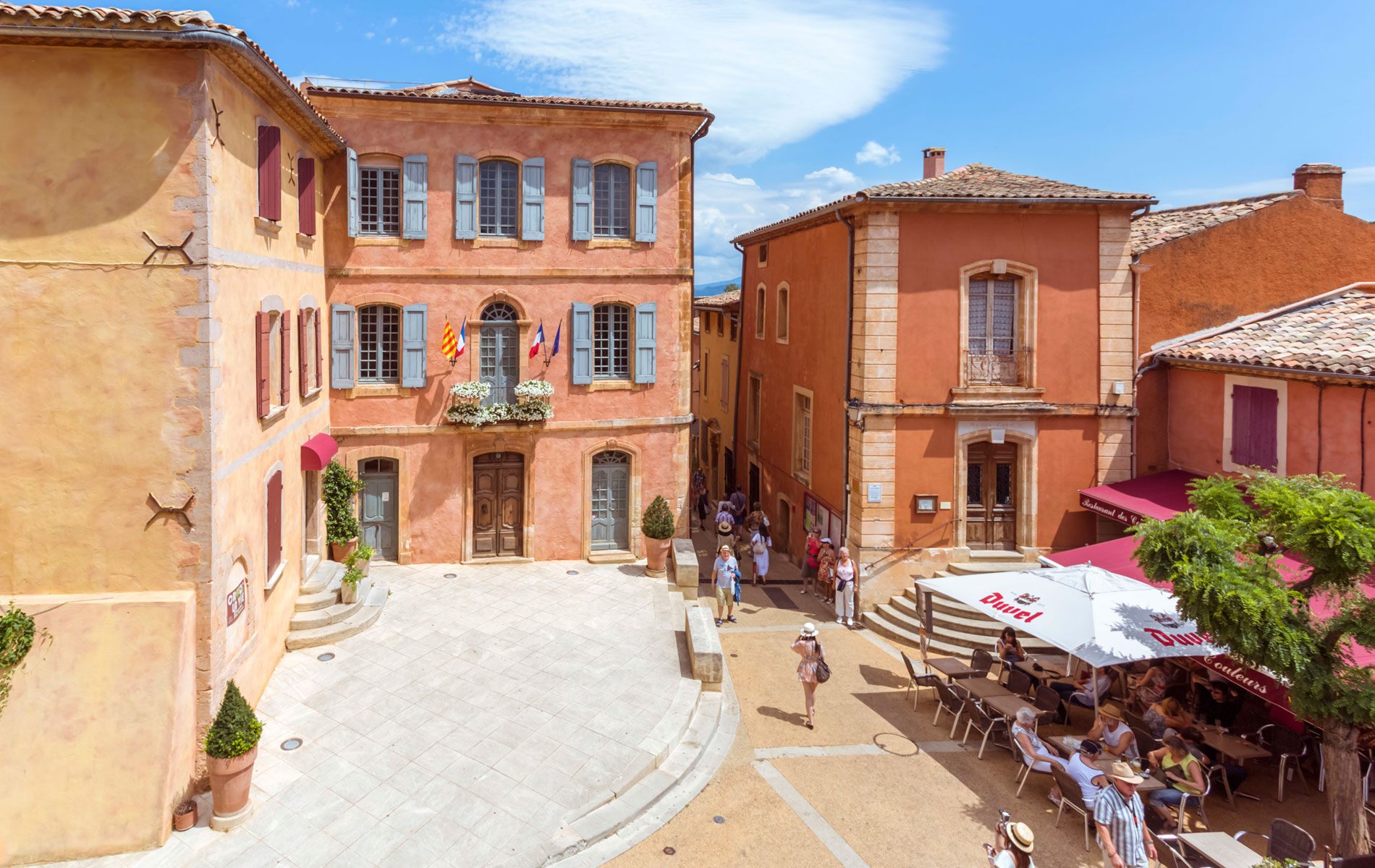 Bordeaux: Colourful sidewalk cafés are a staple in France

Ah, France. The joie de vivre, the je ne sai quois… It is the most visited country on earth. And, after a year of turmoil, she is ready to host the world again. Here, three ways to experience the country now – including five must-do’s in Bordeaux

1. The Anti-Bucket list guide to The South of France

The antithesis of a bucket list goes sort of like this for me: Rather than experiencing something once before crossing it off a list, my goal is to return incessantly to the south of France. Here’s why:

You may want to develop a green thumb after seeing rows upon rows of purple lavender with rose bushes at the end of each row. And the oh-so-French tissue-paper blossoms of poppies growing like weeds—but not like mine at home! (Seriously, weeds. French farmers may use herbicides to get rid of Papaver rheas—the Flanders Field poppy—but there are still banks of them along the roadways.)

One of the smallest hamlets in my travels, Les Baux-de-Provence has a population of 22 – down from the 3,000 who lived within the ramparts in the 13th century. Legend has it that the House of Baux was descended from Balthazar, one of the Three Wise Men who followed the star of Bethlehem, which is featured on its coat of arms. But with the death of the last member of the House of Baux in the 15th century, the castle was demolished and only partially rebuilt until King Louis XIII of France gave the lordship to the Grimaldi princes in appreciation of them driving the Spanish from Monaco in 1641. As the Marquis of Baux, Prince Albert of Monaco was given the keys to the city during his visit with his mother, the legendary Princess Grace, in 1982. He returned to the castle in July 2012 for a tribute to Princess Grace by Paris-Match magazine.

On the edge of a red cliff, Roussillon has more restaurants than I’ve ever seen in a village with a population of less than 1,300. It’s a visual feast, too. The buildings on its spiralling streets glow in every shade of ochre imaginable—yellow, red, brown purple, sienna and umber—found in the clay deposits surrounding the town. The surrounding quarries are said to be the world’s biggest vein of ochre, which, aside from the clarity of the light, was a major attraction for European painters. The natural pigment is the basis of the paints they used to create their masterpieces. I’ve enjoyed a pastis at the yellow café Vincent van Gogh made famous in Arles but, standing in the small barren cell in Saint-Paul de Mausole in the town of Saint-Rémy-de-Provence and looking out the barred window that was his view for the year he spent “resting” here sends shivers down my spine. Far from resting, van Gogh’s confinement to this private asylum (still in operation today) was his most prolific period. Some of his most famous works originated here: The Starry Night, Vase with Irises, Wheat Field with Cypresses. Yet none of his originals are here; only reproductions set up in the fields where he had often worked. Seeing the original scene, standing where he would have stood is, surprisingly, as moving as seeing the paintings themselves, now hanging in museums around the world.

Twice-ground top-quality filet mignon with egg, onion, capers, Worcestershire and olive oil served immediately with salt, pepper and parsley—and a glass of Cassis’s tangy white wine. While Provence may be synonymous with rosé—a sip of summer with every mouthful—Cassis is an aberration in the south of France, specializing as it does in white wine. Enjoying a glass or two with a platter of steak tartare in the seaside town of Cassis overlooking a world-class beach makes you feel like a silver-screen star.

Word has it that back in the ’50s, Hollywood legend Ava Gardner snuck through the kitchens of the prestigious Hôtel Imperator in historic Nîmes (the source of serge de Nîmes, shortened to denim) to meet her lover, Spanish bullfighter Dominguín. Would she have crept down the broad staircase or boldly descended in the art deco elevator to the lush marble-floored lobby? She had been introduced to bullfighting by author Ernest Hemingway, another frequent guest at the hotel, who modelled the bullfighter in The Sun Also Rises on Dominguín’s father. But the glow of Gardner’s star may have been dimmed by that of her lover’s in a town where bullfighters continue to be hailed as rock stars. Posters plaster the windows of shops and cafés, announcing the appearances of matadors at the Arena of Nîmes, built by the Romans in the first century AD and with a seating capacity of 16,300.

Forget crime, the drug trade and the French Connection, the city is famous for bouillabaisse, a rich fish soup with a saffron tinge and garlicky rouille. Did the Ancient Greeks bring the recipe when they founded France’s oldest city, then called Massalia, in 600 BC, or did Venus make it to put her husband, Vulcan, to sleep while she partied with her lover, Mars? At Les Arcenaulx, a bookstore-restaurant in one of the oldest working buildings in Marseille, I find a Canadian connection: in the list of must-read books is the French translation of Three Day Road, Canadian Joseph Boyden’s first novel.

The light and the air

Watch the sun dance on the water. Breathe deeply and exhale. Yes, you can only be in the south of France. —Arlene Stacey

The picturesque ancient abbey of Mont Saint-Michel, half Romanesque and half Gothic, perches perilously on a rocky islet jutting up from the salt flats on the border of France’s Normandy and Brittany. It was there, while on a motorcycle grand tour of Europe as an undergrad, that I made a double discovery. First, Romanesque architecture has a beauty that tugs at the heartstrings, but only if you see it up close and personal because in photos it comes across as squat and gloomy. Second, an art history prof urged me to have lunch at La Mère Poulard restaurant to sample its famously fluffy omelette.

Henry Adams’ classic 1905 book Mont Saint-Michel and Chartres, a study of the faith that built medieval cathedrals, is prefaced with a description of tourists “along the chaussée, over the sands or through the tide, till they stop at Madame Poulard’s famous hotel within the Gate of the Mount.” More than a century ago, the hotel’s restaurant was already renowned for the omelettes that would fortify pilgrims about to undertake the ascent up the medieval shoppe-lined spiralling Grande Rue to the abbey.

More than a century later, there I am, watching how the “floor show” beguiled the time for patrons waiting in queue: chefs in traditional red smocks and black hats rhythmically whisked the egg mixture, then poured it into great copper pans heating on a giant wood-burning fireplace. Or guests can ogle the walls covered with framed autographs from politicians and luminaries such as Ernest Hemingway, Charles de Gaulle, Cary Grant and Yves Saint Laurent.

I was welcomed to a typical lunch starting with Normandy bisque of Brittany lobster and ending with the regional specialty tarte tatin, an upside-down pastry of apples caramelized in butter and sugar—another apple foodie blessing from the land that birthed Calvados (cider brandy)—with vanilla ice cream and caramel. The main course, omelette with pan-fried foie gras and fresh mushrooms, was rich and filling enough to challenge the most gluttonous trencherman, yet paradoxically puffy as a soufflé and lighter than air.

So how do they do it? At home, I whisked eggs to the point of carpal tunnel syndrome without replicating La Mère Poulard’s delicacy. In his Blue Chef blog, New York’s French consulate sous chef reveals that the “famous recipe” includes three eggs per person, whites and yolks separated, whites beaten to form firm peaks and, when the yolks start to coagulate in the pan, one adds one tablespoon crème fraîche to two tablespoons of beaten whites to the middle of the pan. The finished product feels less viscous in the mouth than the usual recipe, he says. He admires “the difference of textures between the thick cooked layer of yolks and the light aerated warmed beaten whites.” Yes, but. Although the omelette recipe remains a secret, Salomé Clayton of La Mère Poulard allowed as to how their chefs do not separate the eggs. The mystery of La Mere Poulard’s omelette endures. —David Lasker

3. Take a cruise on the Crystal Serenity to Bordeaux, France… or do your best armchair traveller with this inspirational slideshow…

A cruise is a wonderful thing: it allows you to unpack once, yet visit much more than just one place. Itineraries vary, but Crystal Cruises opts for some very interesting ports of call, including Bordeaux.

We spend two lovely days in this rich wine region of France including the city of Bordeaux, where art, architecture that invokes Paris and history collide, particularly in the square that borders the pedestrian part of the old town (above). So pack your bag – you’ll only have to unpack it once. www.crystalcruises.com  —Vivian Vassos

Click through for scenes from on board, plus 5 must-do’s in Bordeaux

Must-do #1: Join the locals – the streets are filled with a colourful café society

Must-do #3: Dine on the menu from the restaurant Comptoir Cuisine on the historic main square

Must-do #4: No need to go to Paris – shop at a French institution, the Galleries Lafayette