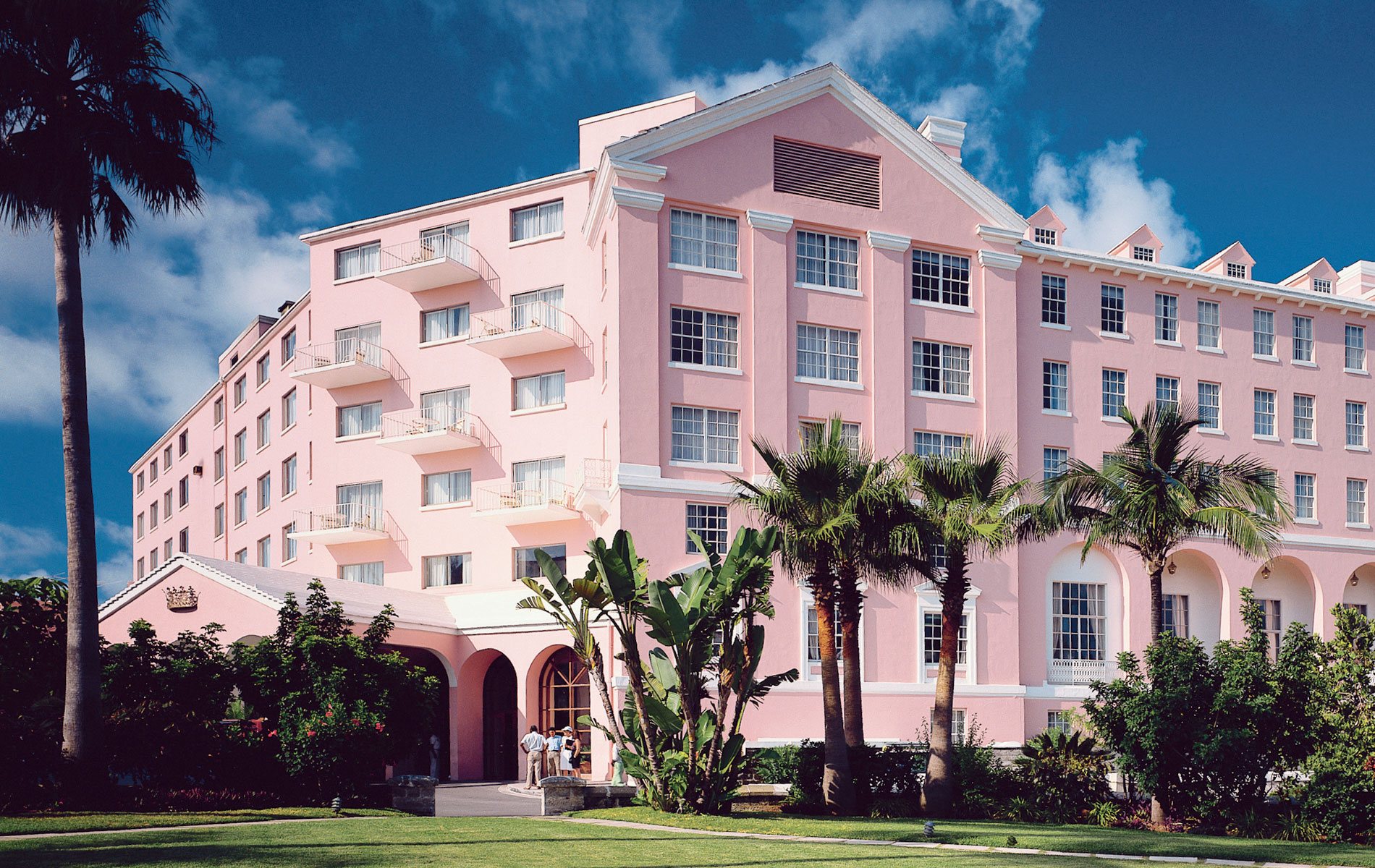 If you’re staying at the Hamilton Princess while vacationing in Hamilton, Bermuda, you may find it difficult to leave initially—especially if you’re an art aficionado.

Bermuda, to me, is pink—pink sand, pink shorts, pink houses. And yes, pink is a colour of happiness, of lightheartedness. It beckons us. In Hamilton, Bermuda’s largest city, I was charmed by a place that the locals affectionately call the Pink Palace. It’s the Hamilton Princess and Beach Club, a Fairmont-managed property and, this past summer, it entered its second act. After two years and about US$100 million later, the more than 100-year-old hotel is ready for its close-up.

The dress code is relaxed, but the attitude has a regal air. Public spaces are a tribute to modern art and, in fact, an opportunity for art snobs and mod-art newbies alike to learn a thing or two. Here I was, not at the MoMA in New York nor the Guggenheim in Bilbao, Spain. I was at a hotel—in Bermuda, taking in the 60-plus–piece collection, with tours run every Saturday at 10 a.m.

I’ve always been an art lover but, as an art history student way back when, I had leaned toward Impressionism. Modern art was somewhat of a mystery. I knew I liked it but my experience recently, having the time to “live” with it for four days, was revelatory. I was inspired by latter 20th-century artists just by staying in the same place where works by Warhol, Koons—even Mandela (yes, Nelson)—make their homes in stairwells, the grand entry way, the back terrace and even the chef’s table dining room, where Warhol’s Mick Jagger series of four prints holds court.

The sculptures with their organic forms spoke to me in a deeper way. KAWS’s near-20-foot-tall wooden Mickey Mouse-based sculpture, At This Time, Companion Series, had me grinning every morning while I ate breakfast on the patio.

Yayoi’s spotted pumpkin made me want to go barefoot and feel the cool grass between my toes as it lounged on the lawn. Untitled (Divina Proportione), Ai Weiwei’s sphere of wooden pentagons like a see-through soccer ball was just begging me to give it a push and see how far it might roll.

It gave me an appetite for more. Banksy gave way to Murakami, who gave way to Hirst, who gave way to even more Warhol—Flowers topped the main staircase, while Reigning Queens: Queen Elizabeth II of the United Kingdom, 1985 greeted guests at the front desk and also reigned over the Trudeau ballroom (after Pierre). The pieces are all part of the personal art collection of the Green family, Bermudian hoteliers who bought the property in 2012. “We have been very excited to share our collection with hotel guests as well as Bermuda,” said Alexander Green, after Architectural Digest named the hotel one of its top 17 hotels with amazing art collections in 2016. And the contemporary works, when juxtaposed against the historic architecture, “enliven the space,” added GM Alan Federer.

Not to be outdone, the food, too, was an elevating experience, due to the recent opening of Marcus’, the outpost of New York City-based celebrity chef Marcus Samuelsson. He’s known for Red Rooster, the groundbreaking Harlem restaurant where his interpretation of American comfort food informed by the storied NYC neighbourhood is fused with his adoptive parents’ Swedish roots and his own Ethiopian heritage. Don’t miss Sunday jazz brunch. The live music enlivens a buffet of Samuelsson’s trademark cuisine, tweaked, of course, to suit this mid-Atlantic island vibe. I even managed to charm the chef into sharing a few of his Harlem-meets-Bermuda recipes.

I, too, am now feeling in the pink. And before I’d even made it to the beach.

IF YOU GO www.thehamiltonprincess.com The property is host to America’s Cup 2017, the premiere sailing event.

A version of this article appeared in the March 2017 issue with the headline, “Art Ed In Bermuda,” p. 84.