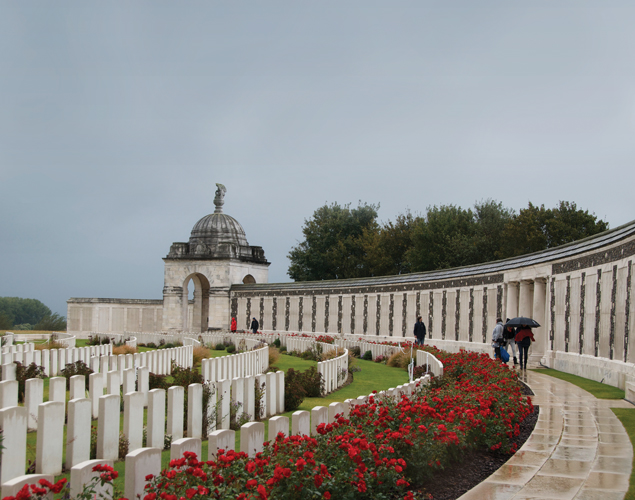 This weekend (Nov. 11, 2018) marks the or the 100th anniversary of the First World War Armistice. Here, some top historical sites and commemorate museums from the “War to End All War”.

Standing on the hilly crest overlooking Passchendaele, the silence is deafening, yet this serene pocket of Belgium – a bucolic tapestry of emerald farms dotted with white puffs of sheep – echoes the thundering carnage of the First World War.

In the drizzly rain outside Tyne Cot Cemetery, it seems right to feel chill-drenched to the bone, my heart reeling with empathy for the patriotic men and boys whose high spirits for fighting “the war to end all wars” fell as swollen corpses mired in seas of mud under clouds of chemical gas in the place that has come to define the epic sacrifice of the great war.

Wrenching as it is to envision soldiers succumbing to brutal trench warfare for a hard-won peace, my emotions grow grim in the Tyne Cot burial grounds, where drizzle bounces off 12,000 white marble headstones, and splashes against marble walls engraved with names of 35,000 Allied soldiers, their remains unknown.

Tyne Cot – the Commonwealth Nations’ largest WWI cemetery – and its adjacent museum is among the poignant sites attracting visitors to battlefronts that erupted between 1914 and 1918 across Europe and in various ports of North Africa and the Mediterranean coast. In every location, tales of triumph or despair may blur together with captions of local history, but they inevitably end with the lives of soldiers whose courageous mettle became the lowest common denominators of battle.

As the war played out on widespread fronts, trying to visit numerous, historic First World War sites requires costly, ambitious travels. Yet, over decades of cruising with my husband – a scholarly history buff – I’ve learned that wartime history resonates on most itineraries, and you can glean a true sense and scope of wartime events by day ventures from certain ports, whether by a cruise line’s guided excursions or independent jaunts which may involve a quick train ride.

It’s worth enhancing your experience with advance research. In Ottawa, the Canadian War Museum is an excellent source of details and map guides. In London, England – where one of the world’s most spectacular cruise experiences is sailing under the Tower Bridge on Silversea’s small vessel as the band plays “Hail Britannia, Britannia Rules the Waves” – it’s advantageous to visit the Imperial War Museum which reopened in July 2014 after major redevelopments that feature new First World War Galleries and exhibits of British First World War art.

For historic perspective: tensions in Europe over treaties and territories linked the then Central Powers of Germany, Austria-Hungary and Ottoman Empire-Turkey against the Allies – Triple Entente of France, Russia and Great Britain. Italy (initially supporting the Central Powers) joined the Entente in May 1915. Smaller European powers picked sides.

The non-European powers of Japan and the United States joined the Allies later on in the war. Passions sparked when Serbian extremists assassinated Austrian Archduke Franz Ferdinand on June 28, 1914, figuring that breaking up the Austro-Hungarian Empire would increase Serbian power in the Balkans. The Austro-Hungarian Empire retaliated by attacking Serbia. When Russia (which supported Serbia) mobilized forces at the end of July, Germany tried to avoid a two-front war by quickly invading France on Aug. 3 via an invasion of Belgium, which had been neutral for almost 100 years.

Britain, obligated to support Belgian neutrality, declared war on Aug. 14, 1914. As a member of the British Empire, Canada entered the war. Over the next four years, about nine million soldiers perished on various fronts, along with some 20 million civilians.

Various cruise itineraries bring visitors close to First World War sites and commemorative museums. These include ships that navigate from London across the English Channel, calling at ports in France and Belgium; circumnavigate the Baltic Sea touching Europe; ply rivers through Belgium or France; sail the Adriatic Sea with stops on the Dalmatian Coast; or veer from the Aegean Sea to Turkey, stopping at Gallipoli. While no itineraries follow exact wartime chronology of “the war to end all wars,” collected experiences – especially on a world cruise itinerary – give a coherent sense in each local area, often along with events of the Great War.

Belgium is scattered with places that send powerful images of war spiralling through your mind. Antwerp – where ships of all sizes typically approach via scenic sailing of the Scheldt River – is notable for two new waterside museums: both portray evocative stories and have outdoor terraces that offer vast views of the landscape. The architecturally modern Museum aan de Stroom focuses on Antwerp history and culture. The Red Star Line Museum – created in the former Red Star Line old brick warehouses – captures the sense of frantic people eager to escape catastrophe by emigrating to havens in Canada, the United States and elsewhere. People whose ancestors fled Europe via Antwerp during the war can track their voyages here.

Antwerp’s train station – itself a splendid architectural gem commissioned by King Leopold in the city’s heart – is a convenient gateway for day trips. The medieval city of Ypres – spelled “Ieper” in Belgium – which was nearly decimated during the war, is rebuilt to its beautiful pre-war state.

At Ypres’ riverside remnants of its 12th-century ramparts, Menin Gate marks the place where some five million British and Canadian soldiers entered the city en route to Flanders, never imagining some 250,000 would never leave. If time allows, visit the iconic arch at 8 p.m. for “The Last Post” ceremony dedicated to soldiers who perished in the Great War. Of all my global travels, my opportunity to lay a poppy wreathe here with personal notes to fallen Canadians lingers in my heart as a most poignant, memorable experience.

In Ypres, the restored Cloth Hall houses the must-see In Flanders Field Museum. It tells wartime stories with vivid displays of life during trench warfare in “no man’s land” that stretched from the Belgium coast on the English Channel to the Swiss Alps. Visitors may visit its WWI Research Centre to trace family members. Climb its belfry tower for panoramic views of the Ypres Salient area where battles occurred.

From Ypres, it’s worth getting a local map, renting a car or Solex motorized bicycle, or hiring a local taxi to explore the lush Flemish countryside en route to pertinent sites.

Lest visiting cemeteries sounds morbid, they are serene and welcoming places to stroll and reflect on young lives sacrificed then and those who fight today.

Essex Farm Cemetery and the Advanced Dressing Station dugout shelter is where Canadian military doctor John McCrae tended to wounded soldiers. Here the First Canadian Artillery Brigade stood in April 1915 before suffering heavy losses after the German chlorine gas attack that forced soldiers to neutralize it by breathing through urine-soaked rags. Here is where – on the dark night of May 3, with no candlelight to alert the enemy – McCrae penned the poem, “In Flanders Fields.” The red poppy – which thrives in crusty turf – remains a symbol of the epic sacrifice of war.

The Flanders Field American Cemetery and Memorial occupies a battlefield near Waregem where the U.S. 91st Division fought during the Ypres-Lys offensive in 1918. The garden setting bordered by linden trees has four rectangular patches of grass where marble crosses neatly stand row on row: in the corners of each patch, a marble Star of David signifies an unknown soldier of Jewish faith. Here, visitors may pause in a non-denominational chapel to meditate beneath a mosaic ceiling that depicts doves of peace flying toward a light in heaven.

A somber aura shadows the German cemetery in Langemark. Here the Massacre of the Innocents (the student battalions of 1914) occurred. Some 44,000 are buried here, most in mass graves.

A short drive away in Saint Julian stands the towering Canadian Forces Memorial called The Brooding Soldier. His head bows in sorrowful remembrance of 2,000 soldiers of the First Canadian Division who died after the Germans spewed gas in April 1915.

Just across the English Channel in northern France, a mammoth bronze caribou stag marks Beaumont Hamel Newfoundland Memorial Park, a point of pilgrimage for Canadians whose ancestors fought with the Newfoundland Regiment as part of the Commonwealth 51st Highland Division and 29th British Division, before Newfoundland joined confederation in 1949.

Here was their disastrous assault against German positions on July 1, 1916, the first day of the five-month Battle of the Somme. Dignified today as a Canadian National Historic Site, it is the largest of five Newfoundland memorial sites in France and Belgium. It is one of few in the entire Western Front whose scraggy existence is pristinely preserved as an archeological battlefield with trenches and a crater created when the British tunnelled under the enemy line to explode the turf. Significantly, here is where Canadians realized the necessity of co-ordinating infantry and artillery tactics. Independent day-trippers can access Beaumont-Hamel from Antwerp’s port by train.

Canada’s largest overseas national memorial marks the Battle of Vimy Ridge in northern France. Here – after unsuccessful attacks by British and French armies – all four Canadian corps divisions synchronized efforts in the victorious offensive of April 1917, albeit at the cost of 10,000 dead and wounded.

Including the fledgling Air Force whose revolutionary tactics in scrutinizing aerial photographs became a tactic of war, this battle marked Canada’s military prowess on the international stage. Designed by Canadian sculptor Walter Allward – to signify what we owed to Canada’s fallen soldiers then and what we will forever owe them – Vimy Ridge features allegorical figures representing faith, justice, peace, honour, charity, truth, knowledge and hope, plus names of 11,285 Canadians who died on French soil with unknown graves. Vimy is accessible by train from French river and seaports (including Cherbourg and Normandy) to Arras, as well as from Belgium’s seaport in Antwerp and river ports in Ghent, Bruges and Leuven.

Aside from places on the western front, several Mediterranean itineraries provide insight to how the war played out in eastern locales and on the “Palestine front.” Some ships sail the Mediterranean with calls at Ashdod for visits to Jerusalem while several ships plying the Aegean and Adriatic seas en route to Istanbul on the Bosphorus are planning 2015 sailings around the hills of Gallipoli where 50,000 British and Australian soldiers stormed the beaches. For example: Silversea will drop anchor for excursions to the Gallipoli Battlefields for a 100th anniversary Anzac Day dawn service.

Where to research WWI:

Movies to see before or while cruising:

All Quiet on the Western Front

Books to read while cruising:

A Farewell to Arms by Ernest Hemingway, 1929, follows lovers from Italy to Switzerland in the shadows of the war.

All Quiet on the Western Front by Erich Maria Remarque, 1929, empathetically details the tribulations of a young German soldier.